The Ugliness of Harperland and the Great Chris Hadfield 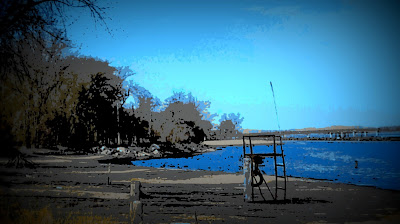 Sometimes, especially on a cold spring day like today, I can't help feeling depressed about living in a country like Harperland.

I can't help thinking about how great we might have been, and what the Cons have made of us.

How once we were admired by the rest of the world, as a cool young country with decent, noble values. And how Stephen Harper and his reactionary cult have shamed us, and turned Canada into a grubby little pariah state.

And when I feel like that, as I did today, all I can say is thank goodness for people like Chris Hadfield... 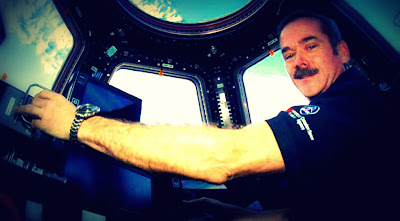 For cheering me up, and making me feel good about being a Canadian. For showing our better face to the world. And yes, for making us look cool again.

Because his excellent adventure on the International Space Station was an absolutely stunning performance from start to finish.

I enjoyed the whole celestial show, but the part I liked the most was when Hadfield spoke or wrote about what it was like to look down on our beautiful blue planet, and see Canada in all its magnificence.

Because I'm sure that from way up there you can't see the smallness, or the grubbiness, of Harperland. Just a big, still young country, waiting for a chance to show the world that it can be great, and decent, and even cool again.

Which is why although I thought Space Oddity was an inspired choice, and I thought his performance truly amazing, I liked this Canadian song even better...

Because I too miss my country and want it back soon.

Which is why tonight, if I could, I would have sent out these two messages from Ground Control eh? 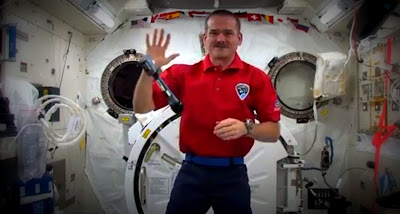 And this slightly considerably less flattering one:

Simon to Major Steve...you are NOT cleared to land, or fit to govern us any longer.

Watch out for the black hole of the next election.

And prepare for a crash landing... 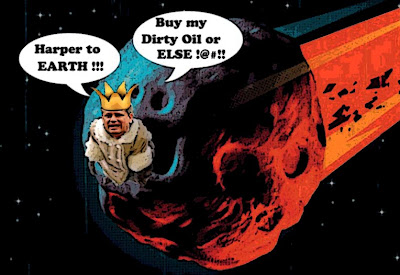 Yup. Until the day the Monkey King is defeated.

Until the day we are free.

Until the glorious heavenly day the filthy Cons are grounded forever.

And Canada can be great again...

Let us hope, Simon, that Hadfield does not allow himself to be used by Harper as an example of the great things his government is doing for science.

Dont worry, Harper will worm him, in an Upstream Color sense.
http://suspendeddisbeliefsteve.blogspot.ca/2013/05/upstream-color-2013.html

Yes I love this although I'm one of your more spacey people. He did a lot for the international space program , for kids imaginations and scientific aspirations, and for Bowie who has a new record out. I like what Canada's CBC's science guy said " leaves the space station as peter pan , goes through the atmosphere as the HULK . It would be interesting to follow this in Russia and I believe he speaks Russian . Hope all is good.

So much talk, so little action.

Keep it up Simon, in fact send a few pointers to the NDP in BC tonight, they need it!

Hi Lorne...I must say that hadn't crossed my mind. But although I suppose anything is possible in Harperland, I believe Hadfield loves this planet, and has too much respect for science, to allow Harper to manipulate him. Although I can see Harper asking to play music with him, which would be horrible enough... ;)

hi Steve...oh no, not space worms...I'd rather think of Harper as the evil computer HAL in Space Odyssey, leading the space ship to disaster, until his memory is removed, while he sings Daisy... ;)

hi anonymous...yes it was cool wasn't it. He did amaze the kids and made friends for us all over the world. One thing I love about the space program is that it has astronauts from different countries working together, and is an excellent example of international cooperation. And of course I love Bowie... ;)

hi anonymous...Gawd. You had to drop in and ruin the party. I had no idea you were a Liberal. And BTW have you ever considered a career in outer space? Just asking... ;)

I am so distraught . Attention aliens. Help wanted. Organism required to run province, country or for that matter world. Once a colony allways a colony. Doormat harperstyle.