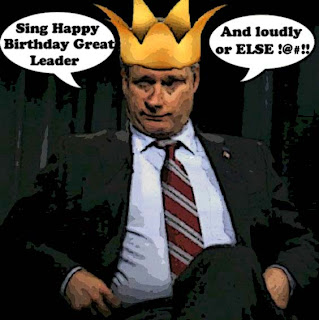 Well I don't know if there was a bright  Jesus star hovering over Toronto fifty-four years ago .

Or a Death Star.

I don't know why the exorcist wasn't there. How hard is it to find a monstrous manger in a city for Crissakes !@#!!

But I do know that on that fateful day so long ago Stephen Joseph Harper was born.

And  it was the day Canada started to die.

But whatever you do, don't tell that to the Cons eh? Because they threw Great Leader a big Birthday Party.

And then they got Jimbo Flaherty to bake a cake.

And served up the CBC on a platter. 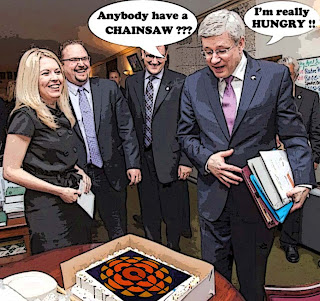 The federal government’s latest budget bill would give Prime Minister Stephen Harper and his Cabinet the power to dictate collective bargaining and terms for other salaries and working conditions at the CBC and three other cultural or scientific Crown corporations.

The new authority, which appears to contradict a longstanding arm’s-length relationship between the independent CBC and any government in power, is contained in a final section of the 111-page budget bill Finance Minister Jim Flaherty  tabled in the Commons on Monday.

Or should I say he helped HIMSELF. Dove in head first, and bit it like a beast, until the cream ran down his face. Because he does hate the CBC so much. And he is determined to destroy it.

"This is an outrageous and unnecessary violation of the principle of public broadcasting. It undermines nearly 80 years of public broadcasting in Canada and around the world by meddling with the essential arms-length relationship between the CBC and the government of the day. The change is disturbing as it has all the markings of an attempt to turn the CBC into a state broadcaster," said Carmel Smyth, National president of the Canadian Media Guild, the largest union that represents CBC workers.

Or mutilate it to pleasure his bloodthirsty Fox News base. By triggering a confrontation with the CBC's unions, and shutting down the place for months in the lead up to the next election.

For how else to explain that he would seek even MORE powers to affect the CBC's fate? When he already controls it.

Great eh? And you know what the worst part is? Sometimes I wonder whether anybody cares? Is there anybody still alive out there in this broken and submissive country?

Where a tyrant can say "When I hear the word culture I reach for a revolver Flaherty !@#!! "

And there is just silence. The silence of the impotent. Or the grating sounds of progressives fighting themselves, even as their country burns.

Oh well. I can see where this one is going, and in this dangerous world I'm taking no chances.

So I also mailed out a birthday card... 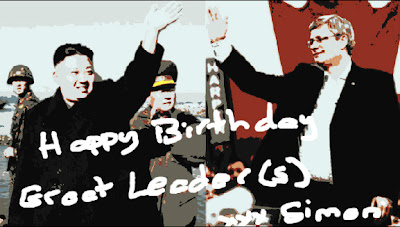 And I also signed the birthday greeting eh?

Under my other name... F.U.Tyrant.

For why fear ending up in one of Vic Toews' prisons, when the whole country is turning into one?

Yup. Wake up Canada. The monster is on the move.

The silence is deafening.

And our country is fading to black...

I'm loosing it for the CBC too much America not enough good old Canada. Inciting fear and hatred for Quebec and Alberta the rich and the poor. Neglecting Canada's originals. No wonder the rush to build more prisons besides awarding contracts to thier best friends. The CBC should be ashamed like the rest who supported conservatives (if you can call them that) in the last election. CBC power panel "what do Canadians fear most" is Harper and where he is taking the country and they know it.

PS The conservatives blaming the liberals for being almost as bad makes the NDP coming up smell like roses. Hooray for spring.
Heave Harper

hi anonymous... While it's true the CBC doesn't always live up to my expectations, or its rich heritage. I can hardly watch the fluffy nonsense on its infotainment so-called news channel, it's still the best we got, it's still capable of great things, and it's still OURS.
So an attack on that Canadian institution is an attack on all of us...

hi anonymous...Well you could see it that way. ;) And we can all agree on this:
Hooray for spring. And let's all heave Harper...