Rob Ford and the Con Kingdom of Denial 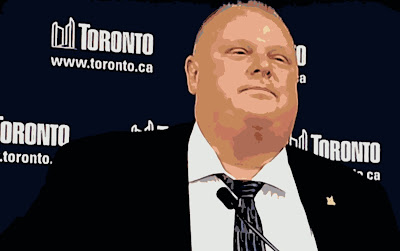 For eight days he turned  Canada's largest city into a circus, and the laughing stock of the world.

For eight days he refused to answer any questions about whether he was caught on camera smoking crack and making racist and homophobic comments.

Only to emerge today, with his head shaved like Colonel Kurtz in Apocalypse Now, and deliver a short rambling  statement.

And then walk away, in an apparent state of euphoria, without answering the question every decent person in the city wanted to ask him:

Has he EVER smoked crack, and did he smoke it with these shadowy drug dealers? 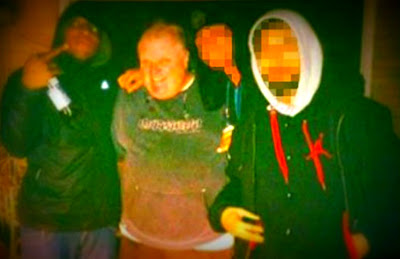 Or for that matter without offering Torontonians any explanations for ANYTHING

No explanation for a photograph that shows the mayor in the company of a man since murdered, shot in the head. No explanation for the provenance of cellphone video footage that appears to show Toronto’s mayor sucking on a crack pipe, thrice watched by Star reporters Robyn Doolittle and Kevin Donovan, as well as the editor of U.S.-based website Gawker.

No explanation for Ford’s voice on that alleged video calling Justin Trudeau a “fag’’ and the teenagers he coached “f---ing minorities.’’

Leaving Gawker, and millions of shell shocked citizens to conclude this is what he means.

And the scariest part is that now that the video sellers have apparently disappeared.

"I haven't been in contact with them since last Tuesday," said Jon Cook of Gawker, who has a "Crackstarter" group collection drive going online. "The guy who put me in touch with them has not heard from them since Sunday." So where are they? In custody? Or just lying low?

Either bought off by the Con mob. On a plane to Las Vegas... or Somalia. Or lying at the bottom of the lake.

Rob Ford just might get away with this outrageous behaviour.

Provided news organizations don’t over the coming days bring forward new evidence, the Fords may still beat all this. The news conference was designed to appease those who were beginning to stray—political allies (Doug Holyday, the deputy mayor, stood beside Rob today) as well as their largely suburban Ford Nation base.

Some people need only the slightest excuse to turn away from what others take to be self-evident.

Because this is Canada and we live in the Con Kingdom of Denial... 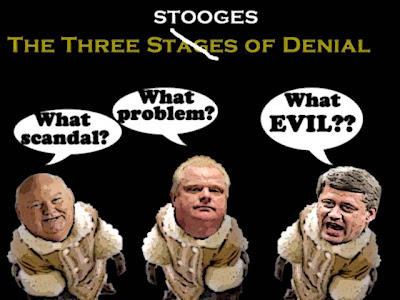 Where Stephen Harper can claim that he didn't know what his right-hand man was doing to help his good buddy Mike Duffy. And that this sordid scandal is just a "distraction."

Duffy can claim he did nothing wrong, despite all the evidence against him.

And Rob Ford can claim he is a good mayor, with a track record like this one.

And still so many Canadians believe what they want to believe. Or live in denial themselves.

Oh boy. And the good news?

I don't think those Con stooges are going to get away with it this time. I think they've crossed an invisible line. The stench of corruption is too great. I think they have all been damaged beyond repair even if they don't know it yet.

The crimes of one are magnified by the others. And if the police don't catch them, and the courts don't punish them, the Canadian people will. For I have never seen them more angry or DISGUSTED.

The day of denial is almost over.

And the day of justice will one day arrive... 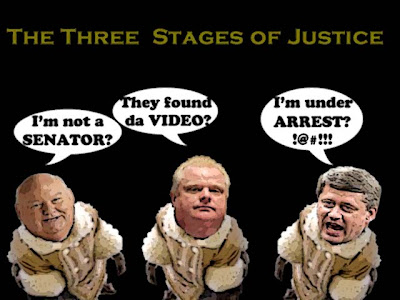 In the meantime, let's just celebrate the arrival of the weekend eh?

And give thanks for surviving another week in the monkey madness of Con Canada.

How do we do it? Aren't we amazing?

Have a great one everybody !!!!

I have been wondering if they delayed the press conference until they had bought the video... hmmm?

I did offer the following comment on Mayor Ford's recent quasi-denial of guilt in an online Yahoo forum on the subject:

"Ford is not on trial in any court because no one has filed a criminal complaint against him, nor has Ford filed complaint against the video sellers for blackmail and extortion nor against the media for defamation of character. Yet he certainly has been "acting guilty" , to the point where he has little credibility with those closest to him, firing his Chief of Staff for suggesting he seek help. In a political campaign the "burden of proof" is much less than that required in any courtroom, just ask Harper who is a master of the art of shaping a rival's reputation, so the issue here is why did Ford not mount a vigorous defense of his reputation from the outset, but rather seek cover and remain silent, before finally turning on his own defenders and closest advisors, and in the end offering a half-hearted, evasive denial.."

In other news Ford nation advocate and champion Candidcanuck16 has taken a break from defending Ford's and Harper's reputations in online forums and has decided to take a dig at Obama's, accusing the US President of having "pawed" his date at his high school prom, and hinting ominously at inter-racial sex, to the delight of Tea Party kluckers and goobers and condemnation as a ' filthy and disgusting canuck' by decent Americans contributors with the following comment:

"did that fat chick he was with have any parents? they should have locked her in her room eweww those black paws all over her"

To which I responded:

"Candidcanuck16 is a Harper minion and Conservative hatemonger who routinely makes declarations such as ..' we are lucky to have him ..( Harper)... look at the US and the fool they have running their country . we are so much more highly regarded by the rest of the world. ' . He is quite typical of the type of bigoted and ignorant support they attract here in Canada - the crack-smoking mayor Ford of Toronto being another... I suspect Candidcanuck16 grew bored directing online insults towards minorities in Canada, or in defending his fearless leader from myriad current scandals, so he decided to indulge in some mischief in US online discussions by directing crude insults towards Obama."

You might want to head over to the Grope & Flail. There's an interesting story there about the brothers Ford and their drug dealing business.

The end is near.

I posted the following comment on an online Yahoo forum dealing with Mayor Ford's denial of drug abuse or drug dealings, in response to calls by Ford nation apologists for "decency and fairness" to fight back against the slander of "liberal fascists".

" As for 'decency and fairness' from the Ford clan, quite a stretch for members of the former Royal York Drifters gang, involved in crimes from ranging from drug-dealing to robbery to kidnapping to homicide, sort of like the current Millard and Smich gang sitting in a Hamilton jail, to run for political office on an anti-crime, anti-drug platform, dupe the Ford nation bigots and rubes with such a platform and win the election, rule the city of Toronto and handle its business, with authority over the Toronto Police and its "war on crime", host BBQs with Prime Minister of Canada... Decency and fairness indeed - quite the opposite as an object lesson in political corruption - and one which may bring down your beloved fearless leader as well as the mayor of Toronto."

hi Cathie...if you remember what the Ford campaign did to get hold of a recording of Rob promising to get a guy oxycontin, including setting up a fake twitter account with a man masquerading as a woman, you can imagine what they might do to get their hands on this latest tape. Especially since for the millionaire Ford brothers, and the powerful interests that back them, $200-thousand is chump change. I wouldn't give a crack dealer a penny for ANYTHING, but I do wish the police would get their hands on the tape, and settle this sordid story one way or the other. And of course I do hope Olivia Chow or some other decent candidate will run for Mayor, so I can bring a broom to the party... :)

hi Rene...my god, as I've said before, those ghastly racist teabaggers must have their heads in the toilet. To me it all sounds like gibberish, both here and in the U.S. I realize that Cons, according to several scientific studies, tend to have a larger than normal fear gland in their brains. And I'm sure that once it must have served some evolutionary purpose. But they are out of control now, and a danger to all of us...