Stephen Harper and the Piggy That Won't Go Away 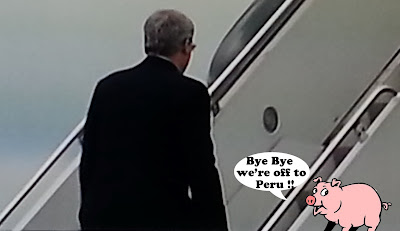 As I watched Stephen Harper walk up the steps of his getaway jet today, I can only imagine what he must have been thinking.

I'm leaving the piggy behind.

Prime Minister Stephen Harper told his Conservative caucus this morning that he's "very upset" by the conduct of some senators and his own office, and asked them to uphold a "culture of accountability."

Harper spoke to Tory MPs and senators at a caucus meeting on Parliament Hill, his first public comments on the Senate spending scandal, but he did not mention by name any of the people who are upsetting him. Media were invited into the meeting but Harper did not take any questions.

Because I have no doubt that Great Leader is "very upset."  Nobody likes getting caught eh?

But asking the Cons to uphold a "culture of accountability" even as they roll in the mud like hogs, or lie about everything, is simply absurd. And so is this transparent attempt to bury the scandal courtesy of his pathetic stooge John Baird:

Baird repeatedly said that Harper did not know about Wright's cheque until it was reported in the media last week and that the Senate spending matters have been referred to two independent authorities for review.

When the "independent" Senate investigation is being conducted by the same people who whitewashed the first one. A report from the Ethics Commissioner could take more than a year to complete.

And judging from the way reporters were screaming out questions today from the back of the caucus room.

While the Con mob tried to drown them out by clapping and hollering like rednecks. Or chanting "Harper" "Harper" like some religious cult.

I don't think the media is in any mood to wait that long to get some answers.

Not when their verdict is already trickling in. And it's BRUTAL

Prime Minister Stephen Harper has attempted to put the Senate scandal behind him. He has failed. He has failed because the imbroglio in the upper chamber speaks to more than the dubious accounting methods said to be employed by Mike Duffy and Pamela Wallin, two high-profile Harper senators forced to resign from the Conservative caucus. It also speaks to the essential Stephen Harper.

Not when like so many Canadians they are slowly starting to recognize that Harper is the REAL problem. They're not buying his ridiculous alibi:

Now the prime minister wants the country to believe he had no idea what was going on. That is not just implausible. It is impossible.

And it won't be long before they join the swelling chorus of Canadians calling for the police to deal with the Harper gang.

Because after what Harper and his PMO goons told the terrified Con caucus today, after they kicked out the media.

They are clearly out of control... 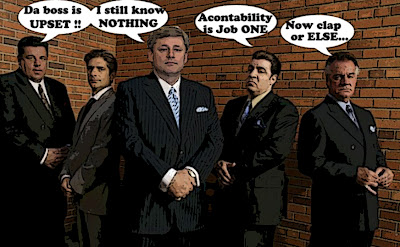 And let's face it eh? The Cons are INCORRIGIBLE.

The only way to clean up the Senate is to abolish it.

The only way to clean up Canada is to defeat the Harper gang.

And what makes this such a potentially damaging scandal is not the crime, but the cover-up.

There are obviously more important issues before the nation than a few senators padding their expenses. But the moment something becomes a big deal is when someone tries to conceal it — whether as a matter of stated policy, as is the case with members’ expenses in both Houses of Parliament, or via clandestine agreements such as we are told was struck between Duffy and Wright: a deal that, on its face, looks a lot like hush money.

For if Stephen Harper is ever found guilty of having conspired to cover-up the truth, to protect a man like Mike Duffy.

Who he appointed to the House of Pork... 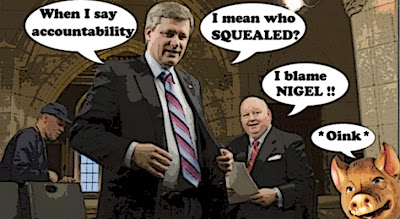 He might face the same fate as that other RepubliCon icon crook... 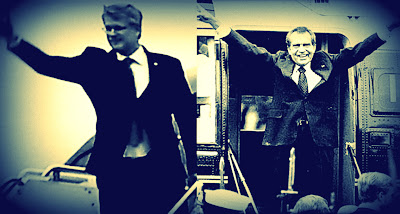 He might be forced to resign, handed a one-way ticket back to the moral swamp he came from.

Or even go to PRISON.

Lordy. It doesn't get any better than that eh?

Not even in my fondest dreams.

We really do have the Cons where we want them. The piggy is oinking loudly. 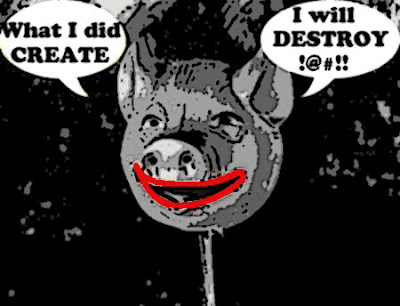 Harpr thought it important we should know he was upset. Gee, it's all about him, the narcissistic. Well, he'll be finding out soon that Canadians are exploding with rage and his inane platitutes have a past due date just like he does.

Nothing will change unless the youth of Canada put down their fucking x-boxes, etc. and get off their lazy asses and go and vote him out of office. Only 1/3 of eligible people voted last Federal election and then the crime cabal got their majority despite the polls held which said that the vast majority of Canadians don't even want this fucking fuck to run the government, let alone trust him for any reason. The old, fat white crowd is going to keep him in power because he keeps appealing to their need to hold onto some icon of perceived power after he successfully terrorizes them again with his phoney environment and attack ads and bullshit immigration fears aimed at their now-diminishing capabilities of cognition. When Canada's youth start to actually read again (if ever) and educate themselves as to what the fuck is actually going on, it will be a very long time before you see this kind of crime cabal ever take over this country again. "It Can't Happen Here" isn't just a snappy little tune written by some genius a while back. It is, or should be, a portent of things that are now come right here, right now. Aum Ha

It's not like we've forgotten the cheating at election time that is still hanging out there unresolved. Or gazebogate. This is a culmination. The media gave him a pass on those other issues that they shouldn't have done, so thank goodness they are not doing it now.

Harper's Omnibull-S-Bill that permitted Communist China the right to sue Canada, if anyone tried to stop China's takeover of Canada. China sued in BC to take BC's mining jobs. Over 300 BC miners applied for the 200 mine jobs, Harper gave to Red China. Chinese miners earn, $800 per month. The courts gave those jobs to Communist China. There are nine mines and mine expansions, going into Northern BC. Wonder who Harper will give those jobs to? Anyone wanting to work in BC mines, must speak Chinese Mandarin.

Same at the tar sands. China refused to pay Canadian wages. Harper permitted Red China, to bring over their own skilled labor. As we know, Harper has permitted all company's to hire cheap foreign labor.

Harper's FIPA deal with Communist China, gives Canada to Red China for, 31 years. China will take the timber and the mines, on Vancouver Island. Harper is bringing Communist China, into the rich resources of the High Arctic.

I signed the petition against Harper's FIPA deal with Red China.

Harper is evil beyond belief.

Who voted PC anyway? do not complain if it was you...learn from this and reconsider next election