The Final Degeneracy of Stephen Harper 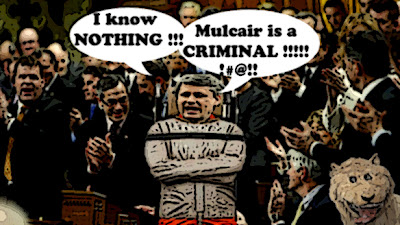 And that it wouldn't be long before The Beast would show its face.

Yesterday he was the human punching bag being pounded by the opposition.

Harper repeatedly turned the questions back on Mulcair and Trudeau, pointing seven times to Mulcair's recent revelation that he waited 17 years to talk to police about a possible bribe attempt by the mayor of Laval, Que., and suggesting Trudeau was refusing to deal with allegations published by CBC News that the husband of a Liberal Senator has $1.8 million in offshore accounts.

For you should have seen him standing there today, sweating like a pig, a desperate look in his eyes, trying to smear Tom Mulcair and Justin Trudeau as he has smeared all his opponents.

“In fact, as we have said, this matter became aware to me on May 15,” Mr. Harper continued. “I immediately made that information public, which is very different than the leader of the NDP who withheld information on the wrongdoing of the mayor of Laval for 17 years.”

“On the other hand, the leader of the Liberal Party should explain,” Mr. Harper ventured, “why he has known for weeks that a member of his caucus, a Liberal senator, is connected to an undisclosed offshore bank account worth $1.7 million, and he has chosen to take no action whatsoever.”

Repeating the same message track over and over again like some kind of weird robot. Trying to make it sound like Mulcair and Trudeau are as corrupted as he is. When they have nothing to be guilty about, and he is The Great Corrupter.

Harper’s aides and operatives are scrambling to protect him from the escalating Senate scandal. But that is not the real problem; it is the noxious odour emanating from the prime minister’s office.

The source of all evil. The one who didn't answer any of these questions today:

While his Con caucus, which as you may know has been terribly terribly depressed. 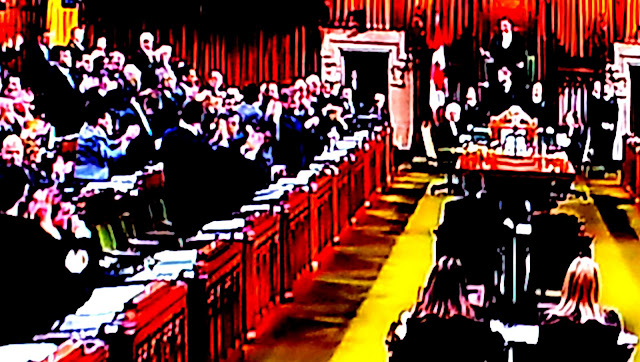 You had to see it to believe it eh?

It was a freak show. They were falling over their desks. They were competing with each other to see who could clap the loudest or impress Great Leader the most. They were screaming, they were hollering.

They were just soooooo happy to see that the old Harper was BAAAAACK... 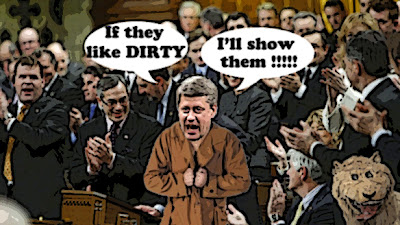 The smear artist, the bully, the political PERVERT.

The one who has corrupted politics in Canada like no leader before him.

And all I could think about after witnessing that disgusting spectacle was how on earth did a grubby bunch like that ever become a Canadian government?

Do those shameless collaborators really think that we will forget how they helped Harper destroy this country? And does their sleazy leader really believe that smearing his opponents will save him?

For if so they are all sadly mistaken. We will REMEMBER.

Yup. As I said yesterday, enjoy the show everyone.

The Beast is back. The Con regime is rotting from both ends.

The degenerate emperor has lost his morals and his marbles... 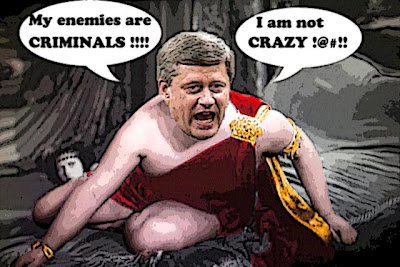 And it really is the Final Chapter....

Don't celebrate just yet. Harper has a majority government and he isn't going anywhere. He can take lessons from christie clark here in B.C. Just stay in office, ignore them all and you just might get re-elected, well if you're not in jail.

Harper was prepared today for the questions and did what he always does, tries to bounce the ball back to the other guy's court. He didn't expect what happened Tuesday.

Where this will all go is hard to say. Having it sent to the RCMP does not make my heart go pittie pat. its more like, now we will never hear anything again.

We can only hope the NDP, Liberals, PQ, and Greens keep up the pressure. No more of the speech making prior to asking a question. No more grandstanding. Do your job, ask the questions and if they aren't answred, keep asking them. If the opposition parties had worked as hard in the past as they did Tuesday and Wednesday we might not be in this mess.

It was interesting watching Flaherty applaud, or not so much. Perhaps he has arthritis in his hands, if not he wasn't that into it. Perhaps he hopes to replace harper, but having watched B.C. politics, Harper doesn't have to go anywhere he doesn't want to.

Absolutely right. harpo just brought out his younger version of karl rove to help "take the fight to the enemy" and you can bet that things are going to get really demented now.
We are about to see millions more of our tax dollars go up in smoke in brand new virulent attack ads and the right-wing garbage that passes itself off as a paper here in Toronto will be all over Mulcair and Trudeau with all kinds of new "evidence" of "wrongdoing" just to keep the smokescreen in place around our fuhrer and his crime cabal. The progs really need to band together or they will be slaughtered separately. I always believed Ignatiev was a spoiler sent into place by the 'murkans just to insure harper would be put back into office and keep the 'murkan lite party in power here so the "multinational corporations" would have their waterboy to fall back on as they americanize Canada. AND IT'S WORKING JUST FUCKING PERFECTLY! If we don't snap out of it really soon, the cons will win FOREVER!!!

It was actually pretty pathetic watching him look around for mud to throw. I notice he didn't mention the taxes owing by the NDPers. Could it be because tax info is supposed to be private and they would have to explain how they got the info. By bullying CRS employees or by having a snitch in CRS? Anyone but me wonder about this.

I submitted the following comment to one of many Yahoo forum discussions in which the witless remnants of Ford Nation are angrily defending mayor Ford with the usual bile and venom and calling for a full investigation into the criminal activity of Thomas Mulcair.

"What is noteworthy in this scandal is that it is invariably the same Conservative supporters, whom Toronto Star columnist Rosie DiManno refers to in a recent column as 'barbarians inside the gate' and 'witless remnants of Ford Nation and those who crawled out from under a rock to profess their support' for mayor Ford, who loudly and shamelessly proclaim the need for a full inquiry into the alleged scandal of then Liberal MNA Thomas Mulcair's failure in 1994 to report an alleged bribe by the mayor of Laval to authorities, that is to have taken the responsibility to launch a police investigation into alleged corruption, whereas said Conservative supporters obstinately, blindly and angrily defend the actions of the mayor of Toronto, who not only did not launch a police investigation into an alleged scandal, but deliberately obstructed an ongoing police homicide investigation by withholding pertinent information from police, and moreover firing his chief of staff for informing Toronto Police of said obstruction."

"This says a lot about morals and integrity in the Conservative camp."

The opposition, NDP, LPC and Greens, need to focus on Harper and have him wear this Duffy scandal. Mulcair as prosecutor was at his best and he need to stay there. The others need to follow that lead. If the CONS managed to get AdScam to become the LPC's Waterloo by just drumming the message over and over again, the other parties need to take a page from that strategy to pummel Harper so that he can't escape the taint of rot come the next election.