The Real Horror of the Rob Ford Show

He's spent the last week running from the media.

Refusing to answer questions about a video that shows him smoking crack with a bunch of criminals.

Then he gets to go on his own radio show and claim that there is no video, and the media are maggots.

Asked by a caller to his Sunday radio show whether it is indeed him in the video described by the Star and the U.S. website Gawker, Ford laughed and responded, “Number one, there’s no video, so that’s all I can say. You can’t comment on something that doesn’t exist.”

While his brother Doug denies he was once a big drug dealer, asks listeners to send him personal information about reporters, and threatens the other members of the City council.

“I can go through all 44 councillors right now, folks — and I’m sure I could do it, but I’m not going to. But I have a message for the councillors: you want to keep throwing stones, I’m going to throw boulders right back at you. It’s very simple,” Doug Ford said.

And we are expected to believe them? When Doug Ford is clearly a political thug.

One really has to wonder what DID happen to those video sellers?

Oddly enough the Mayor was silent until it was announced the seller of the video purporting to show him calling Justin Trudeau a “fag” while hitting the crack pipe has stopped returning calls. Could Mr. Ford and/or his associates have acquired the video?

All this is deeply disturbing.

And Rob Ford is the most ghastly crawling creature this city has ever seen... 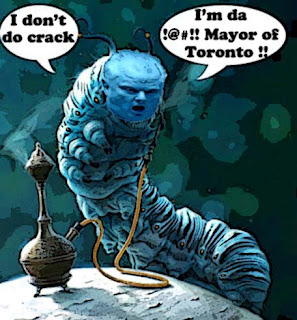 A monstrous right-wing grub with a political rap sheet as long as his squirming body.

There’s more, a lot more. The slurs against minorities, gays and political opponents. The conflict of interest allegations, and the abuses of power. The appalling lapses in judgment — such as, just this week, permitting his staff to hand out Rob Ford fridge magnets at the funeral of the Toronto Sun’s founder, Peter Worthington.

Through it all, Ford and his repellant brother/enabler, Doug, refuse to accept any responsibility whatsoever. They blame a media conspiracy. They blame “pinkos.” They blame the provincial government. They blame everyone, in fact, who does not accept their retrograde ideology and their reckless ways.

And what makes it even more depressing is that so many Canadians, who don't live in Toronto, or hate it, think this grotesque Con mob show is just a JOKE.

When in fact what's happening in Canada's largest city is just another sign that our democratic system is seriously ill, corrupted by the Cons, smothered by ignorance and indifference. And that's not funny, that's frightening.

With a minimal modicum of effort, any Toronto voter in 2010 could have learned who and what Rob Ford was, both as a person and as a politician. The fact a majority decided a political lightweight was still the best person to lead the nation's largest city is a testament to how little voters actually bother to care about anything anymore.

This is chilling, not hilarious. And the phenomenon is not restricted to the people of Toronto, who now deserve our sympathy and compassion, not ridicule.

That's the real horror of the Rob Ford show. Even a Montrealer like me can see that eh?

Or see what the Ford Cons, Stephen Harper and Don Cherry's little buddies, have done to this city. The streets clogged with cars, the choking fumes, the injured and dead cyclists, the corruption, the chaos, the ignorance, the bigotry.

I've seen how this so-called champion of the people, and his fellow millionaires, treat the poorest and the most miserable. Or what he did to the humblest of the humblest.

My friend Jake the donkey at Far Enough Farm on the Toronto Islands... 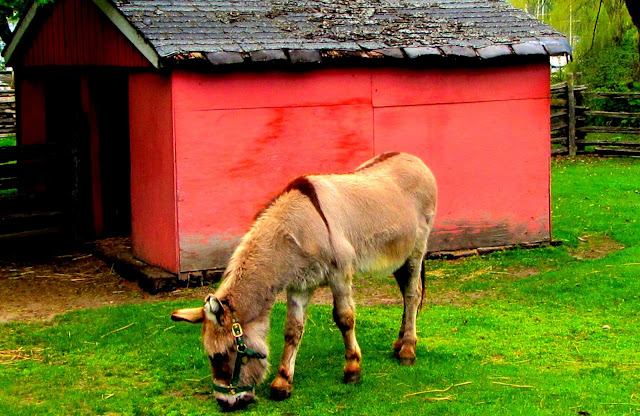 He's 43 years old, he has lived happily on the little hobby farm for almost 30 years. But now Ford has sold the farm to the owner of a tiny amusement park next door who probably can't afford to keep it up.

I understand the anger... 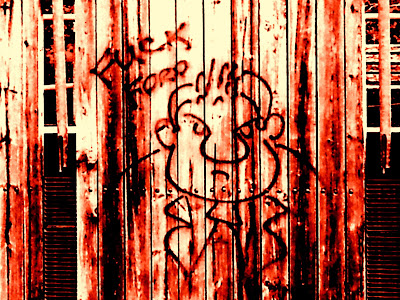 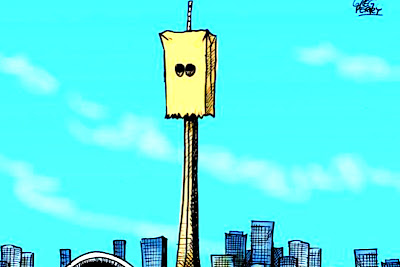 And here's the good news eh?

We ARE going to fuck Ford and his Con gang. Oh boy are we EVER.

We are going to unite behind a good, strong progressive candidate like Olivia Chow.  And we are going to whup Ford's sleazy ass in 2014. If the police don't arrest him first.

Yup. We are going to put the grubby maggot back in the bottle. Or the crack pipe.

Because he can't go too soon. And for the sake of our Canada.

We can't fight him hard enough... 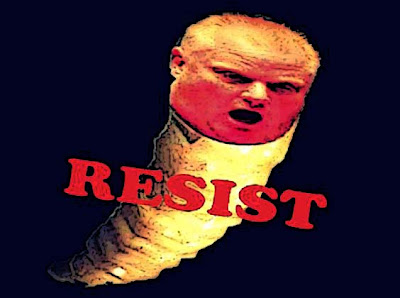 Such a performance by the mayor of Toronto, he's either off to Hollywood or to the insane asylum :

"Nothing is over! Nothing! You just don't turn it off! It wasn't my war! You asked me, I didn't ask you! And I did what I had to do to win! But somebody wouldn't let us win! And I come back to the world and I see all those maggots at the airport, protesting me, spitting. Calling me baby killer and all kinds of vile crap! Who are they to protest me? Who are they?"...

"Back there I could fly a gunship, I could drive a tank, I was in charge of million dollar equipment, back here I can't even hold a job *parking cars*! "

And of course, now come the not even thinly veiled threats from "enforcer", doug. Even the last mafia mayor Detroit had wasn't any worse than these guys!

How about the $50,000 in football equipment he " donated " to Don Bosco, my guess is the money came from the Rob Ford foundation not out of his pocket. Seems he left out the thanks for using city of Toronto letterhead to promote the foundation.

Don them having a short dress up for just a elegant punch.

Media discussion blogs were alive with news of the latest self-inflicted damage in the Ford camp, whereby the Fords brothers delivered a crazed Rambo-inspired rant on Newstalk 1010 radio, without the knowledege or approval of the mayor's communication staff, delivering threats to enemies both in the media and on Toronto's city council described as "maggots" and "unemployable".

Another commenter, noting the dominant role played by Councillor Doug Ford
in the mayor's disastrous public relations strategy, remarked "we didn't get a single mayor, we ended up with two, like Master and Blaster from 'Beyond Thunderdome', " with the hapless Rob Ford in the role of Blaster.

Feeling abandoned, the mayor restaffed his office with former football colleagues, which lead one commenters to note " it seems like the only qualification required to run Toronto City Hall is knowing how to play footfall".

Though one would imagine the major's new press secretaries, with their extensive football experience, may prove invaluable to the mayor in fending off media attacks as he seeks the exit to city hall. Mayor Ford just has to hunch down and and hurry along, reliving his glory days, as in some Al Bundy flashback, imagining he's the quarterback running with the football.

hi Oemissions...yes they are aren't they? Their policies are bad enough, but their behaviour disgusts me...

hi Rene...it is quite a performance isn't it? The buffoon Rob Ford is simply appalling, but his brother Doug is the absolute limit. One of the Toronto TV stations carried their radio show live, so I had a chance to watch them in action. And I can honestly say I've never seen anything so vulgar and so sinister. No decent people could consent to be ruled by thugs like that and it really is time this horror show was ended...

hi anonymous...can you believe Doug Ford? You'd think that after he's been accused of having been a big drug dealer, he might not act like a mobster and threaten journalists and the City Council. Talk about a bully pulpit, it's simply beyond belief...

hi anonymous...I confess I can't keep up with the Ford brothers. Every time I look up they are in trouble again, or making assholes out of themselves. They are the biggest disaster to hit this city since Hurricane Hazel. But at least now more people are getting a better idea of what kind of thugs are running their city, and if the police don't arrest them first, the voters will take care of them in the next election...

"the ship's crew is deserting the sinking rat."

And I must say I'm not surprised BOTH his press secretaries resigned. After your boss calls the media "maggots" there really is no way back... ;)

Jake would make a great mascot for an anti-Ford campaign. Poor old guy; hope he gets to live out the rest of his days in peace.

Much nicer ass than those two arseholes...

Simon, I recently saw your "hat trick" video of the Harper/Ford barbeque from August 2011; and the guy to the back left of Harper looks a lot (to me) like Lisi -- not exactly the same as his recent pics but there's just a "look" if you freeze the frame. Do you know who that man is? Not that it means anything but it's just curious.

We know the Ford brothers are damaged goods inflicting damage.
The real question is for how long will they be accommodated? Reckless assholes with a very big chip on their shoulders. They are very harmful.