Stephen Harper and the Nightmare Night 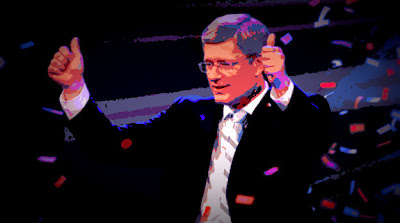 It's hard to believe it's only been two years since that nightmare night.

Two years to the day since Stephen Harper finally got his precious majority.

And our precious Canada began to wither and die, as if choked by some monstrous weed.

Or ravaged by an invasion of alien apes from some barbarous planet in the bowels of the universe.

Mercifully, I can't remember much about that nightmare night.  Except for the little pieces of paper raining down on him, and the crazed look in his eyes.

As it slowly dawned on him that he HAD fooled those suckers, he WAS going to be able to screw Canada beyond recognition, and NOBODY could stop him now.

Due to the shock, and the booze, I was unable to write anything for a few hours eh? And when I finally managed to crawl to my computer all I could write was this.

It's not much, but it does give you an idea of how I felt that night... 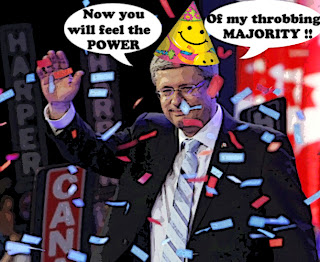 But of course I didn't leave. And no, the Cons aren't Nazis. Just a shabby gang of right-wing ideologues and religious fanatics, with a depraved leader who would do or say anything to cling to power. So he can sing his version of Tomorrow Belongs to ME.

But they are the worst and most sinister government this country has ever known. They are bullies. They are political pornographers. They are debasing our democracy. And they are shaming us in the eyes of the world.

So why do I feel so much better today, than I felt on that horrible night two years ago?

Because in the process of diminishing our country, the Cons have also diminished themselves.

And so has Stephen Harper... 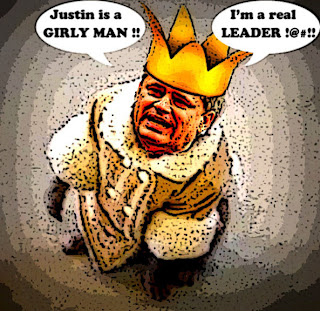 The alien apes are still our monstrous masters, but they are so much less than they once were.

And two other stories in the news today serve to show how far they have fallen:

A new poll suggests even their base is shrinking.

The latest Canadian Press Harris-Decima survey suggests the Liberal party jumped into a seven-point lead over the Conservatives over the two weeks that followed Trudeau's landslide leadership victory last month.Liberal support stood at 35 per cent, while the Conservatives dropped to 28 and the NDP to 22. The Green party was at seven per cent.

And the Sun TV News gang says no mandatory carriage charity, no network.

Sun News Network made its final pitch to the federal telecommunications regulator on Thursday, saying anything short of a guaranteed spot on the dial would spell the end of the channel.

Which clearly shows that not only are the Cons hugely unpopular, nobody but NOBODY wants to buy their garbage ideology. 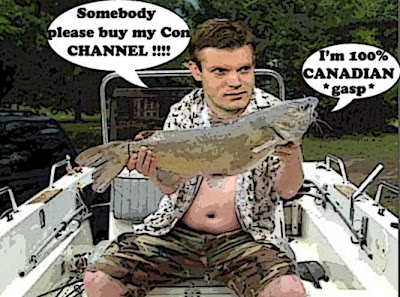 Which at the end of the day leaves me humming my new favourite song eh?

Tomorrow Belongs To Us.

Still dreaming of a united left.

And still asking myself that haunting question.

From what ghastly planet DID Harper come from?

Does our Caesar understand that he can't intimidate all of us?

And of course, won't it be a BEAUTIFUL day when the nightmare is finally over?

The Cons are back in their cages.

And Canada is safe again...

Their base may be shrinking, Simon, but is still quite vocal. Reformacons are busy indulging in warmongering and crazed paranoia on any of a number of discussion threads at Yahoo Canada, calling for mass deportations and a war against all Muslims to the threat of the loss of UN offices in Montreal due to Harper's Middle East policies - whereupon the Reformacons are calling on Canada to leave the UN entirely and wage war on the Middle East. I had a number of exchanges with thoroughly depraved individuals on such threads, and accused them of seeking " to cut of their nose to spite their face"

On another front, that involving the firing of a Mississauga realtor for distributing homophobic literature in the course of his business dealings, the Reformacons are out en masse coming to the defense of Sociology, and pointing out to the uninformed that the Liberals are crawling with gays and lesbians.

Here's my contribution to the latter exchange:

"And now the Reformacons come to the defense of Sociology, even if they have travel all the way to University of Texas to find a study which bolsters their prejudices, and all too predictably rise to defense of the ignorant, arguing that this realtor had the right to voice his prejudices in the course of his business dealings."

I always enjoy your polemics, regards.

hi Rene...As I've said before I don't know how you do it, wading through those Con swamps. You're like Indiana Jones in the Kingdom of the Dead.;) My own scientific background prevents me from venturing anywhere near them, lest they challenge my firm belief in the theory of evolution. Because clearly many of them have not evolved according to plan. But I'm still blaming it on the enlarged fear glands in their brains, which makes them think EVERYTHING is a conspiracy, and come to the most ignorant and alarming conclusions. It's not their fault of course, so I don't want to jail them all. But after the revolution they will have to go back to school... ;)

Harper’s Cons are a disgrace. On the barest of robo-fraudulent majorities they are diminishing the civil and human rights of the vast majority of Canadian citizens. It’s the biggest power grab in the history of Canada by abusing Parliament through Trojan Horse omnibus bills stuffed with deregulation like Christmas turkeys. They disempower parliamentary committees, hijack private member bills to launch trial balloons, exhibit maniacal control of information, sweep aside ministerial responsibility and attack the authority of Parliamentary officers and senior civil servants. They’ve hijacked the authority of Parliament and put it into their own hands. They’ve Americanized our political process with never ending elections, by ending party subsidies, using attack ads and spending obscene amounts of public money for Con party advertising. They are undermining not only Parliamentary democracy but the electoral process as well. How long will we as Canadians put up with this CRAP?

Poor poor Simon. Just wait till you see what they have in store for the nest two years. Heheh, it will drive you plain over the edge......no really, it will.

hi wazz...I don't know how long Canadians will put up with this democratic nightmare. I can't understand why their patience wasn't exhausted long ago. But I'm confident that they way things are going, it will run out long before the next election...

hi anonycon...no I'm afraid you have it backwards. It's not poor Simon it's poor YOU. It's your leader who is going over edge, in spectacular fashion. I'm just sitting back, munching on chips and popcorn, and enjoying the show immensely... :)