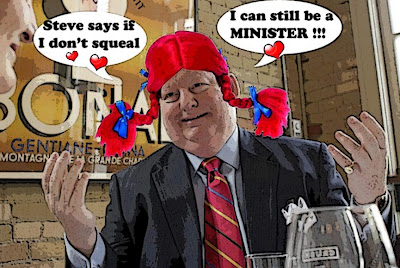 Well, as you know, I've been having fun with this one for years.

But today I'm really laughing my you know what off eh ?

Because now I know for sure that Mike Duffy really wanted to be a Minister.

Six months after he was appointed to the Senate, Mike Duffy was in consultations with Conservatives about an expanded role in the party and increased compensation, including his own suggestion he be named a minister without portfolio to get a car and staff, according to an email exchange obtained by CBC News.

The email asks for advice about how Duffy should be compensated for what the email calls "my expanded role in the party."

And now I know Stephen Harper will NEVER get away from Duffy no matter how hard he tries.

Like today, when he tried to talk about beef, or grapes, or whatever, with the President of Chile. Only to have Old Duff steal the show. Again. 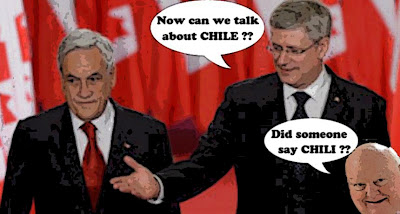 Prime Minister Stephen Harper says he had no prior knowledge of a $90,000 payment by his former chief of staff to cover expenses improperly claimed by Senator Mike Duffy, and if he had known, he "would have said not to do it."

Because what the e-mails show is how close Duffy was to Stephen Harper .And how much he believed Harper owed him, or loved him. For stabbing Stephane Dion in the back in the dying days of the 2008 election campaign.

They also make Duffy look like even more of a Con operative, which makes it even less likely that Harper didn't know what Nigel Wright was doing to help his pal Mikey. 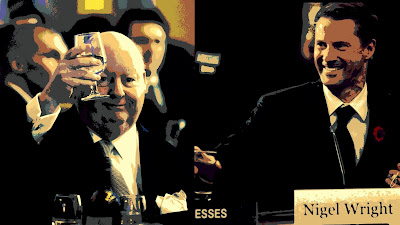 And here's the best part.

Although after looking closely at a recent picture of old Nige, intercepted by a CTV reporter while running half a marathon through the deserted streets of Ottawa at 4 am in the morning. 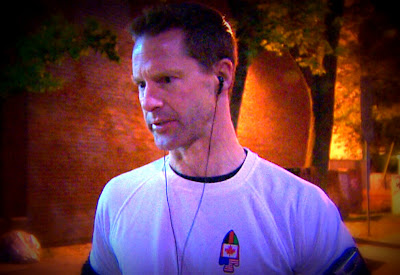 I wouldn't be surprised if he is the kind of religious fanatic who WOULD take the fall for Harper. If you know what I mean eh?

But it doesn't really matter what he says, because NOBODY will believe Harper. Or give him the benefit of the doubt.

If we’re to believe Harper’s account of the timing, therefore, we must first believe that not only Wright, but also PMO communications staff, did not warn their boss of the imminent cataclysm. If that’s true, then everything we thought we knew about Harper is wrong. Far from being a control freak, he’s a delegator of Reaganesque proportions. Except that no one in Ottawa believes that. This is a government in which all lines of power lead back to one office, and one man.

Not even many of his own supporters believe that he didn't know.

He has burned too many bridges, lied too many times, poisoned his own well.

The Conservative party is home to many decent folk, and good, hardworking MPs. But as an institution, with Harper at its head, it has obstructed, deceived, attacked, maligned and bullied, in ways and instances too numerous to mention here. So that now, when the prime minister most needs the benefit of the doubt, it is nowhere around him. Seeking trust that he did the right thing, he finds there is none. And the vicious spiral deepens.

Or, to put it bluntly, he screwed HIMSELF.

And now he's in a death spiral. 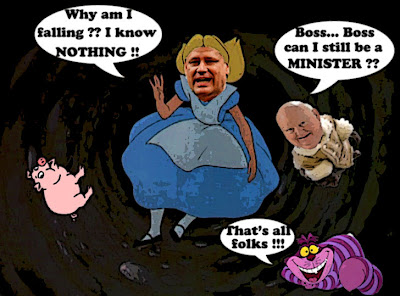 On the subject of fake Christian religious fanatics, bigots and Harper supporters, I crossed swords with a few on Yahoo Canadia discussions this date, pertaining to the Ford rather than the Duffy scandal.

I commented in response to some Wildrose bigotry:

It would appear one Albertan Reformer, with no direct interest in the affairs of the city of Toronto, seeks to rally to the defense not only of Toronto's scandal-ridden mayor, while other Conservatives choose to maintain a safe distance from the fallout, but moreover to rally to the defense of a kindred spirit not in Conservative advocacy, but in racial hate-mongering, which in this Reformer's eyes comes to the same.

She purposely ignores other statements made by this individual on Yahoo forums, which should clarify whether such individual speaks on behalf of the Conservative Party, or rather for the extreme fringe of Wildrose:

"Fascists Loved their Nations.."
"Deporting certain cultures and races to live with their own kind would be an answer."
"The Cons are Really Liberals in Disguise..We have three left-Wing partys ...Light... regular... and Dark.."
"...If you had 40,000,000 Africans, and 60,000,000 Mexican Indians ,like the USA does,you'd have a WORSE Problem"
"If you go to areas filled with Darkies or Mexicans you may have a problem.."
"Economic immigrants ...They are not coming here because they love Canada, they come here for Jobs and Money that Canadians of Europeon Descent, who's People ,and Anscestors that created Canada should have.."
"to Squelch talk like mine they call it "Racist", and make Hate speech laws to Muzzle the truth..And to make sure that the Europeon and North American Countrys are brought down to a Common level they Flood our Countrys with 3rd world Losers to make sure it's brought down.."
"If Rascism, or a better description,Nationalism, is what it would take to get our Europeon based Country back, i would say go for it.."

My apologies for the length of the above quotes, but these Reformers are so thick that unless you place the proof directly before them, they will deny. In fact, they continue to deny despite the evidence, as one bitter Reformer accused me of fomenting hatred against Christians and Conservatives:

"So, Rene, why is okay for you to be a hate-monger of Christians and Conservative Party members/supporters?
I guess those of the left are the only ones allowed to be bigots and hate-mongers.....
Freedom of speech, freedom of thought, freedom of religion.....but only allowed if the left-wingers approve it first! They can discriminate against any group they want to though!
Pathetic."

To which I replied:

What is pathetic is a hate-monger hiding behind some fake Christianity, who offers prayers for those of his race and directs hatred towards other cultures, calls for a ban on immigration and the deportation of minorities, be they black, hispanic, muslim or other. To call such advocacy Conservative amounts to false advertising, as such is not the program of the Conservative Party. Now if such individuals wish to continue such advocacy under their own political label, so be it, and readers will judge accordingly.

My criticism of Conservative Party supporters in this regard is that they have not sought to distance themselves from such advocacy, as this is not their platform.

And in other news, Reformers are in an uproar over a state of emergency in Kyrgyzstan threatening Canadian corporate interests, and the mood is ugly among the imperialist muslim-baiters on Yahoo, as news reports indicate:

"Kyrgyzstan imposed a state of emergency on a northern district on Friday to protect Centerra Gold's Kumtor mine from protesters, but more unrest against the Canadian investor flared up in the country's south."

"But Centerra has come under immense local pressure. A state commission has said the firm is paying too little to run Kumtor and accused it of damaging the environment while protesters have raised demands ranging from jobs at Kumtor to building roads."

"Police on Friday cleared away demonstrators who had been blocking the road to Kumtor for days and arrested 92 people, Prime Minister Zhantoro Satybaldiyev told a news conference."

"A few hours later police used tear gas and stun grenades in clashes with villagers who tried to seize a substation and cut power supplies to the mine, a police spokesman said. Fifty-five people, including policemen, needed medical treatment."

So I waded into a Yahoo Canada Reform hatefest of capitalist threat-mongering and muslim-baiting to comment :

"From the perspective of the people of Kyrgystan, foreign corporations are exploiting their resources, and they are demanding control and ownership of their resource industries."
and again

"It would appear Kyrgyz opposition politicians are calling for nationalization of the mine. And the US equivalent of modern day Reformers howled their outrage and demanded armed intervention when the Mexican government nationalized their oil industry in the 1930's. Whereas wherever greed and exploitation are to be found, you will find Reformers bowing and scraping before their masters, as the Wildrose leader bowed and curtsied before Lord Black at the Calgary Petroleum Club luncheon...."
and again

"Ironic how the comments about ungrateful locals - see how we raised their standards of living, gave them education, gave them jobs in the mines, after everything we've done for them - were voiced by Belgian, French, British, Portuguese colonialists complaining about the wretched ingratitude of locals working the copper mines in the Congo or the diamond mines in Angola, when tensions reached the point that the locals revolted and decided they wanted to manage and control their own resource industries. "

To which one presumed Reformer, named Little or no Sympathy commented:
"Maybe if people would stand together and stand up to the government here, things would change (The Province of Quebec is EXCLUDED from this comment)"

to which I responded:

"The residents of Quebec reciprocate with little or no sympathy for the party making such comment..."