Stephen Harper and the Fatal Boondoggle Oh. My. Gotterdammerung. Not even Sybil the Soothsayer could have predicted it would end like this eh?

Who could have known that Stephen Harper's rotting Con regime would collapse this way?

Not with a bang, but a boondoggle.

Prime Minister Stephen Harper is rejecting suggestions the Conservatives are embroiled in a “boondoggle” after a federal watchdog revealed the government lost track of $3 billion in spending earmarked for anti-terror initiatives.

Because it doesn't really matter what Harper says, or what happened to the money, this is going to hurt his Cons. Big Time.

As my colleague John Ivison noted on Tuesday, even worse than the fact that money was wasted — what else is new? — is that no one even knows how it was wasted, when it was wasted, or even if it was wasted. That’s embarrassing.

And a godsend to the opposition. Not just because they get to crow about wasted billions, but because until and unless the government can figure out where the $3.1-billion went or is, it has no response to the opposition attacks. Thomas Mulcair can get up every day in the House and demand an update. Every time the government has no answer, they look stupid.

Because while many Canadians might overlook some of his other crimes, like his  decision to weaken Elections Canada.

The Harper government is under fire for cutting Elections Canada’s budget even as the agency struggles to address rampant procedural errors and widespread allegations of cheating during the last federal vote.

So Pierre Poutine and his gang can more easily steal the next election, like they stole the last one.

And while many might also ignore Harper's chilling assault on the CBC. 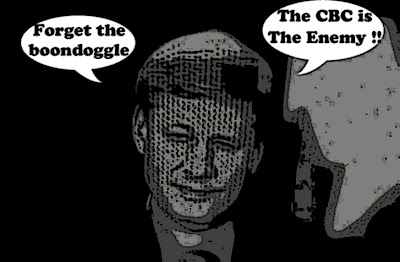 The government is threatening the journalistic independence of the CBC with legislation that will give Prime Minister Stephen Harper and his Cabinet power over CBC collective bargaining with unions representing several thousand news and current affairs personnel, MPs and critics say.

To make sure its crippled by a long lockout during the election campaign.

The government move, which will give Cabinet control over all aspects of contract settlements with its employees, comes as five of the CBC’s six collective agreements are set to expire prior to the 2015 federal election and the other, which expired last September, is under negotiation.

Even the dumbest Canadians will NEVER forgive the Cons for losing all that money.

Canadians are a forgiving lot, but they don’t tolerate that degree of mismanagement. A government that spent $176-billion it didn’t have may be brought down by $3.1-billion it might not have spent at all.

And when you can hang a boondoggle like that around the neck of a rotting government, and around the gizzard of a depraved leader who is revolting even his own cult followers with his kinky behaviour.

Conservative MPs have been quietly approaching Justin Trudeau to tell him they’re refusing to take part in their party’s planned mass-mail attack against the new Liberal leader.

The stench of decay hangs heavy in the air.

And it's almost game over... 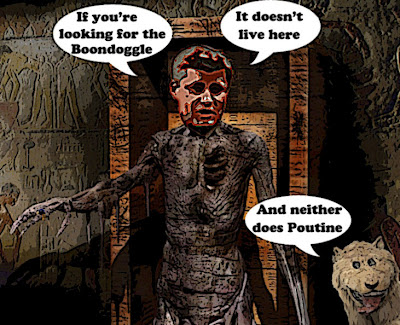 Wow. What a great horror show. The Cons are crumbling to dust before our eyes.

The Boondoggle raised them from the hellish place they came from.

And then came back to destroy them...

Not to worry, Simon. There's plenty of old, fat, stupid white used-to-be-middle-class Canadians left out there who will just blindly go along with harper and any kind of ridiculous bullshit he happens to be spooning into the daily dose of morning vitriol pablum they're so fond of swallowing that him and his crime family cabal will probably still get re-"elected" regardless of how much of their money he has "misplaced" into his and his henchmen's pockets. Older Canadians are funny like that. Fortunately they're starting to die off as we speak. Unfortunately, the damage they're doing will probably be felt for generations. Should have culled the herd of cons years ago before they could multiply like the cockroaches they are.

I'd like to know where the other 12.9 billion went to, along with many other billions.

I'd be careful with those allegations of voter fraud until they have been independently verified.

The first thing that Hitler did when he was 'elected' (for the first and last time) was put a chokehold on what little unbiased journalism was left..he knew that controlling the message was more important than anything else...but sad to say, I no longer get my media from the CBC, at least not most of it, because even online, the CBC is grossly tethered to the Con message...here in BC, the televised CBC News is now headed by a guy so old he retired from the rightwing-leaning Global TV News then magically reappeared to head up the CBC local broadcast...no one was fooled, and what used to be a nightly 'must' for me has turned into a turgid, business-centric bit of drivel...so sad...most of the broadcasters from BC CBC shows that are still around are working for Knowledge, which is nice, but really they are relegated to shilling for dollars just like any PBS station, so Harper and his jackboot ConJobs have succeeded, at least locally, in destroying the original agenda of the CBC and made it irrelevant..a good long lockout would probably be the final shovelful of dirt on the waiting coffin..RIP CBC, it was good to know you....

Harper is not able to control the CBC, as he can with other media. Good honest Journalism and reporting is pretty much destroyed in this country. Most media are, propaganda machines for the government. CBC has been the voice for Canada, since before WW11. Six members of my family, served in WW11. Canadian families would crowd around the radio, to listen for news of the war on CBC radio station. CBC is our window on the world of today and yesteryear. Anyone or anything Harper can't control, he gets rid of. All Dictators do that.

How anyone with self respect, decency, morals and ethics, could ever support a monster, such as Harper? Beats the hell out of me.

Well, I hope so.
But Bush lost track of billions in Iraq and it didn't seem to hurt the Republicans at all. I couldn't understand why not -- maybe that much money is just too difficult to comprehend.

"didn't seem to hurt the rethuglicans at all"? That's why Obama's been elected twice, right?

They have guns, you don't.

hi anonymous 6:44...I understand how you feel but I try not to just blame the old. Younger Canadians are also to blame, for not getting involved or voting.
Harper plays to the natural insecurities of older Canadians, but some seniors I know make me look like Harper's buddy. ;)
What I would like to see is a giant coalition or movement made up of all ages. For when that happened in Quebec during the student protests it was beautiful, and it can happen again...

hi anonymous 1:04...now don't get carried away. If we don't have guns how can we hurt the Cons? Or are they allergic to bug spray?

hi anonymous 7:54...I suspect when the Con regime is finally defeated, we shall not only find out how much damage they have done, but how much it all cost. Oh well. When they show us the bill we shall add it to their prison sentences... :)

hi anonymous 9:32...There is no question that voter fraud took place. The only question that remains to be determined is who did it, and how big is the conspiracy? And of course, what have they done that we don't know. Yet...

hi lefty...I do agree that the CBC does tilt to the right these days, or does bend backwards to please its paymasters. Their local news coverage also plays into the Con Agenda with its never-ending crime stories. But they do have some good journalists, and they were the ones who recently broke the foreign workers story, which greatly embarrassed the Cons. So yeah, they aren't as good as I might hope, but they are better than most, and they are still ours...

hi meadowlark...yes as I was just saying the CBC is still better than most of the private stations that are slaves to their corporate agenda. It also has a very proud history, and I simply can't understand why so many Cons hate it so much. It's as crazy as their leader...

hi Cathie...In the case of Iraq billions were nothing but pocket change. And at least they can blame it on the fog of war. Here the fog is something Harper created, and now it's coming back to haunt him. So anxious are the Cons to disguise their accountability, their reporting mechanisms are so crippled, they can't find the money when they need it. Talk about being hoisted on their own petard, This can only get better... :)