Uh oh. It looks as if Stephen "Raincoat" Harper is not only having trouble controlling his base impulses.

Controlling his depraved desire to portray Justin Trudeau as a girly man.

He's also having trouble controlling his own caucus.

A growing number of Conservative MPs say they won't mail their constituents the party's latest attack on Justin Trudeau, saying the negative, taxpayer-funded pamphlet is just not their style.

Some MPs told The Canadian Press they've been hearing complaints from constituents on the issue. Ontario MP Larry Miller said a voter told him he didn't like it when former Liberal prime minister Paul Martin attacked Stephen Harper, and doesn't like what the Conservatives are doing now.

"I don't like negative advertising, I don't use it, and that old saying — I control what I can control. I've voiced my opinion on it, I don't like it," he added.

And who can blame them eh? When those ads are so low.

It is a fact, now almost universally acknowledged, that these attack ads are aimed at men and the point is to question Trudeau’s manliness. They air during sports events, for a presumed audience of men and what they offer us is a faceoff between Trudeau and Our Glorious Leader. A faceoff on manliness.

And Harper's views on what makes a man a man, so misogynistic, so homophobic, so creepy and so old fashioned.

The series toys with traditional ideas of authentic manliness. It suggests that the old ideal, the authentic manly man, is an enigmatic spectre, a figure whose solidity masks a wealth of perversity.It also tells us that, right now, nobody knows what defines a man as a leader. One person’s leader is another person’s weirdo.

For surely Canada has never had such a weirdo and a political pervert as a leader. And this sordid stuff WILL hurt him.

Because it's one thing when his sheep caucus isn't afraid of him anymore... 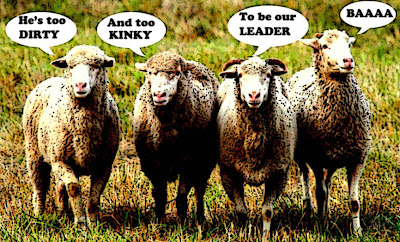 But when they start to screw up their noses, because even they find him DISGUSTING, it's the beginning of the end.

For when we can use THEIR quotes to attack HIM, you  know the attack ads have backfired. Big Time.

The dirty old man has been XXXposed.

And the show is almost over...

It's almost as if the PC's are finally starting to clue in that the reformers they got in bed with are actually kinda psycho after all.

Great comedy club material, which has many Conservatives cringing in embarrassment, from bullying attack ads which backfired to images of Harper dressed up like some pathetic dude wannabe at the Calgary stampede to a sorry admission by fearless leader that he feels unloved and unappreciated on his birthday, and orders his minions to scramble, get busy and whip up congratulatory sentiments and adulations from the cowered, the passive, the tuned-out or even from the ranks of his enemies...

You have additional sideshow material, like the rodeo clown performance of BC Conservatives in the BC election, extending from a scowling Conservative leader participating in the leader's debate with this constant angry sourpuss scowl on his face, indicating either he's constantly sucking on lemons or ceaselessly irritated at the world around him, including his own would-be followers and would-be Conservative candidates, whom he expels for various transgressions. One such fellow named Popoff, a "kook" excluded from a party of misfits and sourpusses, has released his own attack ad video directed against the BC Conservatives, in which a rambling political rant is being constantly interrupted by what one might describe as "bestiality porn" antics with a bull. Playing on Yahoo Canada newsites and apparently approvingly on the site of one earnest Harper minion named BC Blue.

For all the talk of attack mode, they would appear to be in retreat mode, licking their wounds and planning their revenge.

Such, in any event, are the themes being offered on a Harper loveboat Alaska cruise christened " Freedom Cruise" being promoted by Sun News entertainers, around themes such as:


•Sizing up the opposition: could Mulcair or Trudeau derail Harper in 2015?
•Oil under siege: will environmental extremists shut down Canada’s key industry?
•What happened to Alberta, and are conservative ideas safe anywhere in Canada?
•Is the U.S. now a liberal country?

It would appear the enemy camp is portraying itself as besieged from all sides, with liberals strutting around America, the oilfields under siege by "extremists" and conservatives beaten back to the borders of Alberta and no longer safe even within its borders.

And of course such pleasures offered on this Harper-friendly cruise as endless diatribes on the above themes by "personalities" such as Ezra Levant, described in cruise literature" as a "provocateur", oilfield lobbyists, the leader of Wildrose herself and sparkling Sun News wits such as that fellow with a history degree from a Texas university and a Moe Howard hairdo.

This should give you the opportunity for any number of ripping polemics.

hi Rev...well one can only hope eh? Because goodness knows it's about time. But there is something so absolutely disgusting about those attack ads I guess even some of those Con sheep must think enough is enough...

hi Rene...I think the problem we face is that the Cons have given us so many targets to shoot at, it's hard to know where to begin. But I wish you hadn't mentioned that Freedom Cruise. Because I sometimes have nightmares about being trapped in an elevator with Ezra Levant, but being trapped on a ship with him and all those other Con losers would be even worse... ;)

I did a follow-up to my "freedom cruise" comments detailing how some former Blogging Tories and far right Reformacons have become unhinged with fear-mongering paranoia over crime and muslim immigration, with screeching assertions such as ” York Region Police Services under the control of Muslims”.. are ….”blackmailing Canadian citizens using their own special brand of muslim tactics” and ” Province of Alberta has the hots for Islam and Jihadists” and similar lunatic Reformacon ravings seeking salvation from the rays of sunlight offered by Sun News network.

I won't repeat post here but you may find it entertaining at Sister Sage's Musings....