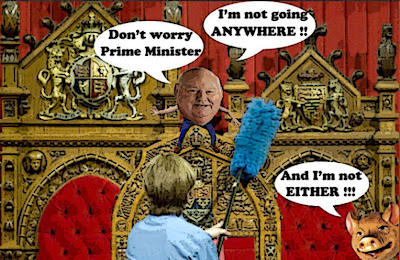 Because this is just too good to be true eh?

As if that Con scandal in the House of Pork wasn't already one of the most amazing shows I've seen recently. Right up there with The Bates Motel. Or Rob Ford and the Scary Crack Dealers.

Now if you can believe it, here comes Mike Duffy demanding a full public inquiry !!!!

Senator Mike Duffy said Thursday he wants a "full and open inquiry" to answer the many questions Canadians have about the spending scandal that prompted him to leave the Conservative caucus and now has the RCMP asking the Senate for more details about spending rules.

He wants everyone to know he didn't do anything wrong when he helped himself to $90,000 he didn't deserve, and then got Nigel Wright to pay it back for him. So he could tell the auditors to take a hike.

And not only that.... he wants EVERYONE to know what Stephen Harper knew about the deal !!!!!

And that he shouldn't worry about his old pal Mikey, because he's not going ANYWHERE !!!

Duffy declined to questions from reporters about the different versions of the Senate report, his relationship with Wright, and about his lawyer. He flatly rejected a question about whether he plans to resign or stay in the Senate "Pfffft. Of course, I'm a senator, why wouldn't I?"

OMG. I can only imagine how the leader of the Con mob must be reacting to that announcement eh?

Down in sunny Colombia... 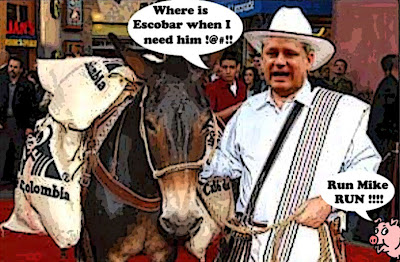 Because Duffy sticking around is bad enough, but SQUEALING is worse, and public anything could be FATAL.

Gawd. David Macfarlane is right. This is the stuff of fiction.

Imagine you are writing a political thriller that needs, as a plot device, a self-important mediocrity whose sense of entitlement is so overreaching he not only thinks he can get away with cheating, he believes he deserves to. Could you possibly do any better than what’s on the front pages these days?

Being totally delusional is clearly not what you want in a senator. Unless, of course, you’re Harper and you get to choose them. But it’s not a bad trait for a character to have in a work of fiction. If Mike Duffy were any more of a stereotype you’d have to give him a fez, a fly swatter and a café in Casablanca.

And since it's absolutely KILLING the Cons, I just want to say I think it's worth EVERY penny of that $90,000 Mikey borrowed first from us, and then from Nige.

I mean think about what we're getting eh?

A first class scandal. The fatal damaging of the Con brand. The abolition of the Turkey Senate or House of Pork. Maybe even the premature departure of Stephen Harper, and the total destruction of his foul and corrupt regime.

And all for the price of a Duffy Buck.

What a horrible scandal.

What a beautiful bargain....

Because I'm as greedy as a Bay Street broker eh?

Did someone say something about "Cracking Up"?

mike duffy has proven himself to be a thief, a cheat, and a liar, he is also the worst embarrasment Canada has ever had and a complete coward. This pig needs to be jailed for the rest of his miserable life and if his bum buddy stevie harper is unwilling to make that happen as it should by allowing a true and unbiased investigation by the "PROPER AUTHORITIES" then stevie should get to share fat mike's cell with him and not simply as a visitor. A group of my friends and I were recently given a list of names of persons invited to a hypothetical dinner party we would all attend. The names were Adolf Hitler, Carol Hulmolca, Luca Magnota,Osama Bin Laden and mike duffy. We were each instructed to strike off the name of the one person we could absloutely not imagine breaking bread with. The name everyone stuck from the list--- mike duffy, hardly a surprise, though it would have been a more difficult decision if harpers name had been included. Nice work mike and stevie you've just insured we'll all be playing hockey in hell before Canada is stupid enough to elect another conservative government!

Nigel Wright, was in close contact with the senator who has been accused of whitewashing an audit of Mike Duffy's expenses. And yet, Harper is sleeping at the wheel, completely oblivious to what is going on. Yeah, right.. after Harper, Wright is THE most powerful man in Canada. A man who is in constant touch with Harper 7 days a week. A man who is in charge of Harper's "brain center" aka the PMO. A man who has to approve all strategy, policy and and legislation. And this man/Nigel Wright, who paid-off one of the most visible and vocal Senators with a $90 000.00 cheque to obstruct and audit did not inform his boss/the PM of Canada of what has happened? Harper is lying. It is as simple as that. Harper insisted that Paul Martin had full knowledge of all the minutiae surrounding the sponsorship scandal. He said it was impossible Martin did not know of the activities of the miscreants in Quebec who abused the program and he said Martin was lying. He repeated day after day, after day, after day. Paul Martin took full responsibility like a man and he called an injury. He was punished for his honesty and Harper won office based largely on Paul Martin doing the honourable thing. Yet now Harper, like Sergeant Schultz, knows nothing. He told that to the nation. By his own admission Stephen Harper is an incompetent, clueless hypocritical fool and as dishonest as the day is long.

when i think about the many many people who go to work everyday to serve us and never get even a free bus pass and the dire need for affordable housing i get very angry with these greedy bastards who lived off the fat of the land and think nothing about taking more
Senators should behave as elders and volunteer their time without pay and perks
Just proves there are free lunches!