The Harper Cons and the War on Truth 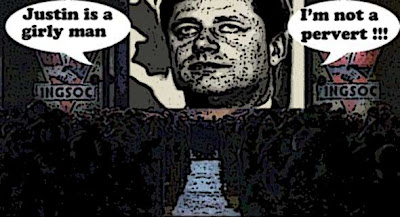 Trying to brainwash people into believing that Trudeau is not a real man.

The Harper government is looking for a creative contractor to continue those feel-good "economic action plan" ads that have blanketed the airwaves for the past four years. A new call for tenders says the winning advertising firm will spend up to the next three years handling ads on TV, radio, theatre screens and print and digital media.

And trying to buy the next election:

The initial contract runs until March 31, 2014, with two one-year options that would take the advertising to the end of March 2016. Under Canada's fixed election date law, voters must go to the polls in 2015.

Even though polls show that Canadians are sick to death of those Porky Action Plan ads.

Government polling on the ad campaign last April found that only six out of 1,000 respondents went to the actionplan.gc.ca website for more information. Other respondents called the ads "propaganda" and a "waste of money."

But Great Porker Leader doesn't care. Because like Orwell's Big Brother he believes that if you repeat a focus tested Big Lie enough times, enough people will believe it.

And two and two WILL make five... And as if that isn't totalitarian or insane enough, now him and his foul Con regime are trying to rewrite history.

Federal politicians have launched a “thorough and comprehensive review of significant aspects in Canadian history” in Parliament that will be led by Conservative MPs, investigating courses taught in schools, with a focus on several armed conflicts of the past century.

Trying to rewrite our history of peaceful compromise into a history of war to conform to their twisted right-wing values.

NDP deputy heritage critic Andrew Cash said Canadians should be concerned that Conservatives on the committee are trying to revise Canadian history. “They’re obsessed with reframing history and rebranding it in the image of the Conservative party,” said Cash.

And brainwash us further into accepting their tinny teabagger vision of Canada, as revealed to Great Ugly Leader when one of the many voices in his head started quoting Orwell instead of Stalin.

And I can do is shake my head and quote Orwell's book back at them. This one is for Stephen Harper:

“You must try harder. It is not easy to become sane.”

And this one for all the Canadians who love our bruised but still beautiful country and can't believe what those grubby alien ideologues are doing to it:

"Until they become conscious, they will never rebel”

Because until more Canadians wake up and realize that the Cons are no longer a government, just a sinister right-wing cult, with a depraved political pervert as a leader.

And until the MSM stop treating that insane regime like it had any credibility left. Or excusing Great Ugly Leader's weird behaviour, and his democratic atrocities, as mere eccentricities.

That evil cult will take us to a very dark place, where the truth doesn't stand a chance.

The madness of Stephen Harper will continue.

And who knows where his demons might take us? 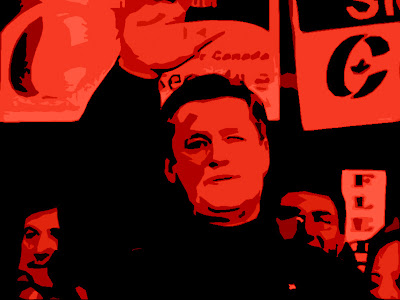 On the other hand, since it's the weekend, try to think of this way eh?

He's never looked so ugly or so perverted, or so dangerous.

And every time they see one of those Porky Action plan ads Canadians will groan, think of him, and then hate him even more.

Great Leader is hanging on the ropes, I mean the drapes.

Once the world was his oyster.

Now it's just his balloon...

Tom Flanagan is a prime example of the ideological and practical purpose to which historical revision and "reinterpretation" can be applied. Far from being simply some isolated academic exercise, Flanagan's academic career, such as it is as opposed to his political career as backroom Yoda on behalf of Reform, the Reformacons and Wildrose, has focused on challenging Native and Metis rights, unfortunately with no small measure of success.

Flanagan's historical reinterpretation of the North-West Rebellion and his writings on Louis Riel has served to defend the federal government's response to Métis land claims.

Hardly an example of some detached, unbiased and purely academically motivated enquiry into Canada's past. Far be it from all scholars to seek to redress past injustices, but it takes someone with a pretty vicious ideological agenda to derive satisfaction from further victimization of history's victims, to add further injury to past injustices ....

I'm with you there Rene.
Want to revisit history how bout Riel a hero.
And full study in elementary schools about who are Canada's Originals along with
Champlain La Salle

And get rid of the royals cause they ain't no hofenstafens.

Sentenced to hang by a scot who'd been in the country less than a year.

No offense, guys, but I think the more salient point here is the egregious actions being perpetrated on Canada right now by der fuhrer harper and his crime family cabal. History is important in as much as it reminds us of where we actually come from and not to repeat our same mistakes but right now we have a huge problem with queen harper and his taking total control of Canada to the point that he will probably elect himself emperor instead of holding elections in 2015. The present is where we have to concentrate and once we have secured our country out of the clutches of the anti-christ (harper) and his minions, we can worry about straightening out the history books then. "Divide and Conquer" isn't just a cutesie phrase: it is a proven strategy of war and we, as a collective, are falling for it AGAIN with all this other side-show stuff that we are focusing on instead of the elephant in the room. Wake up! You're getting sucked into the vortex again!

In Texas, a right wing editorial board goes through every social studies textbook submitted for use in the state's schools. The board makes sure that only "correct" versions of American history are taught to Texan students. Anything that might put the United States in a critical light, or suggest that it is not "the greatest country God ever placed on the face of the earth" is not allowed in the curriculum. That is the sort of fanatical control Harper would like over Canadian history books. And surely these idiots will be redefining Canadian history in much the same fashion they arrive at the conclusion the earth is 6000 years old.

hi Rene...yes I always thought it was outrageous that Tom Flanagan should ride in from the United States and start reinterpreting our history. And of course, he was one of the founding fathers of the so-called Calgary School, a collection of kooky right-wing Alberta separatists if ever there was one. But then where is Flanagan now? Back in Teabagger Land where he rightfully belongs...

hi anonymous...please don't remind me that the criminal who sentenced Riel to death was Scottish. My hairy people can't apologize enough, and we disowned him long ago. Now we tell people he was really English... ;)

hi anonymous...I agree that we must not be distracted by the sideshows the Cons are always staging to create wedge issues, and distract us from their sinister objectives. But it's always useful to remind people how alien and un-Canadian the Harper cult is, and why it's so important to make sure we defeat them in the next election. Failure is not an option...

hi wazz...what disturbs me the most about the Harperites trying to tamper with our history is that they are trying to distort it into some chronicle of wars. When our country was created by the genius of peaceful compromise, unlike the U.S., and that's what we should be celebrating. Not just to preserve the past, but ensure our future as a united country...