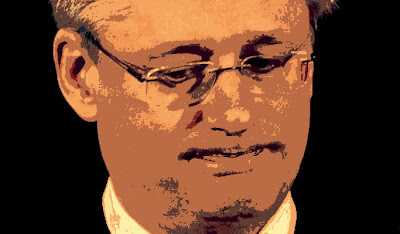 Well it took a long time, and he had to travel all the way to Peru, before he finally agreed to talk to the media about the sordid Senate scandal.

But today he did allow reporters to ask him TWO questions.

So he could tell people in Canada he's very, very, very sorry. But don't blame him, blame Nigel.

Prime Minister Stephen Harper says that not only did he not know about his chief of staff's "gift" to repay Senator Mike Duffy's expenses before the story broke in the media, he was not consulted and did not sign off on Nigel Wright's decision to write a personal cheque.

And now, before he has a total nervous breakdown, or bites someone, could we please forget this unfortunate "distraction" ?

Because for him and the Con regime....after accountability.... the economy is Job One !!!

And so the Great Travelling Roadshow continues.... 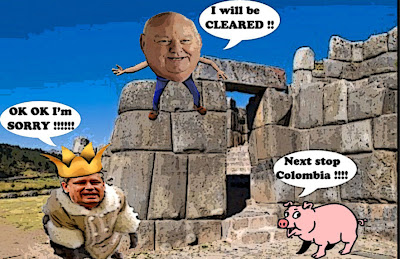 With Stephen Harper still claiming he didn't know what his right-hand man was doing to save his good buddy's ass. And his ass too, for appointing him.

Mike Duffy still claiming he's going to be cleared, even as his tab just keeps getting bigger and bigger.

Two Con senators being asked to explain who ordered them to sanitize Big Mike's audit.

Stewart Olsen is one of Prime Minister Stephen Harper’s most loyal advisers, dating back to his days in the Canadian Alliance Party.

John Baird reading his prepared script in the Commons to claim the Cons can't show us the documents, or even the cheque. 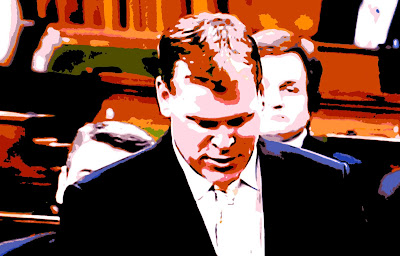 Nathan Cullen, the NDP House leader, now broadened the matter. “Can the Conservatives say definitively that there were no documents in the Prime Minister’s Office that related to the Mike Duffy and Nigel Wright scandal?” he wondered. “To be clear: no emails, no memos, no notes. Yes or no?”

In response to that simple query, Mr. Baird offered praise for the ethics commissioner. “This matter has been referred to her and the government is prepared to fully co-operate as she looks into this issue,” the Foreign Affairs Minister assured before repeating his understanding that a “legal agreement” does not exist.

“They rode into Ottawa on their high horse of accountability, and all we have to show for it is the mess that horse left,” he quipped. “They should take their Federal Accountability Act and run it through that horse and throw it on their roses for all the good it has ever done us.”

“My question for the minister is simple: When did it all go so terribly wrong?” he wondered. “When did they jettison integrity and honesty and accountability for the sake of political expediency?”

And millions of Canadians, along with some in the media, still demanding answers or ELSE.

If the Prime Minister can’t bring himself to address the issues in any meaningful way, that role must now devolve to Parliament, its ethics officers, Senate auditors and the Royal Canadian Mounted Police. Serious concerns have been raised; they must be answered.

Liberal MP Ralph Goodale says the Duffy deal “has the appearance of a payment that was designed to prevent further examination” of questionable expenses. Pressure is building for a public inquiry. The optics are that bad.

For it has come to that; if our elected representatives can't get the answers they are asking for, the police must DEMAND them.

And if Stephen Harper thinks he can bury this stinky "distraction" he's got another thought coming.

Because if he wants to play Clue I say we do... 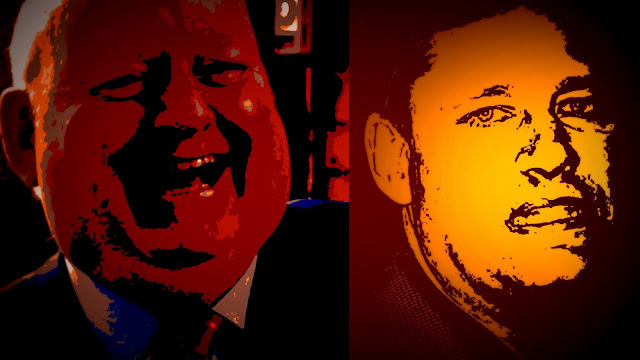 Stephen Harper and his Senate buddy.

Why is Duffy laughing? What is Harper HIDING?

Will Humpty Duffy fall off the wall and take the whole Con regime with him?

And another one...will Stevie Desperate crack up before the next election?

.. we should be asking what Stevie/Ray is doing in Peru ..

If their 'mission' (with gawd on their side) involves any mining 'interests' or extraction, defoliation, driving indigenous peoples from their lands and homes .. we should be recalling them, scalding them.. demanding from them, just who the F they think they are, pretending to reflect Canadian values, or any entitled mandate they are dazed, confused, conflicted or conflated and failing at.. on OUR BEHALF ..

Forget the whiny Duffy, the entitled Wallin .. the Prime Rib Rump Roast of Reformed Alliance Canada eh .. has ensured we won't hear from the 'ethics' department of decay and delay or our lawyers for a year or two.. long after we hear about how he's cleaned up via electoral fraud.. and windexed the windows of his armored vehicle so he can confirm what province or country he is polluting.

Note the silence of Mackay stage right.. nothing from Manning on the open pit ethical quagmire of parliament, Kenney muses with his mommy, stage left .. and the Stevie/Ray caucus looks to China for reassurance that all is well .. the boreal will be stripped, the pipelines will flow, the supertankers plague ships will sail .. the fracking will be successful ..
fer ever n ever AMEN ..

Harper is a follower of the Leo Strauss school of political philosophy. His followers were neo conservatives, Christian fundamentalists and militarists. Strauss taught at Chicago U like Flanagan. The belief is that '-perpetual deception of the citizen by those in power is critical because they need to be lead and they need strong rules to tell them what's good.' What a handy philosophy for an ego centric narcissist. Allows him to lie as much as he wants.

Harper is a control freak. No-one but no-one is permitted to say nor do anything, without Harper's approval. That is in Parliament and outside Parliament as well. Even Scientists were not permitted to publish their papers. Those papers too, had to go through Harper first.

I am grateful to Justin, for filing his request. Harper is so corrupt, controlling and vindictive to anyone opposing him, I doubt anything will come of Justin's request. He is dealing with Harper who has, no morals nor ethics, what-so-ever.

hi salamander...you're quite right, in the moral world we should be asking what Harper is doing in Peru, pandering to our appalling mining companies who are disgracing us all over the world. And I almost did include a good story by Tom Walkom that looked at that angle, and at the Harperite's vicious anti-union agenda. But as usual my post was too long, and I left it out. However, I could still use since he hasn't left South America yet !!! ;)
And as much as I would like to leave Duffy and his ilk behind, we will not get to that moral world until we defeat this ghastly regime, and Duffy is the best 500-lb bomb or deadly buffoon we have been able to drop on the Cons in quite a while. He absolutely destroys their claim to be accountable and transparent, in a way that even the dumbest Canadians can understand. And we must use what the Great Polar Bear God of the Great White North mercifully provides us with to fight our enemies. ;) However, I look forward to the day when we have finally defeated them, so I can raise my sights higher, focus on all the things we need to do if we are going to survive, and above all escape the moral squalor they are forcing us to live in. For it offends me more than just about anything else....

hi anonymous ... yes I am familiar with the Leo Strauss cult, and its belief that a small elite should control us all, for our own good. And of course for the benefit of them, and the small capitalist elite that actually does run the world for its narrow interests. Funnily enough Preston Manning was the first to recognize, or at least write, that Harper seemed to think he owned the truth. But he thought it was a minor character flaw, and others didn't connect it with Strauss, and the doctrine of perpetual deception. And now we're all paying for it in spades...

hi anonymous 12:54...yes, he is a control freak and I haven't the slightest doubt he was fully aware of what was done. And since he has proved himself to be a liar again and again, I'm sorry but I can't believe ANYTHING he says. As far as I'm concerned, quite apart from his hideous policies, Harper is morally unfit to be a Canadian Prime Minister. Period...

hi Way Way Up...Yup. I got to say this about the Canadian Forces, they do teach you that leadership, integrity, and honesty count for something. And although I have my flaws, like a bad temper, I have always tried to live up to those values. And the problem I see is that all this grubbiness isn't just the fault of the government, it's the fault of all those Canadians who let them get away with it, or shrug their shoulders and say they're all the same. We need Canadians of all political persuasions to at least agree on something: when it comes to grubby stuff enough is ENOUGH...