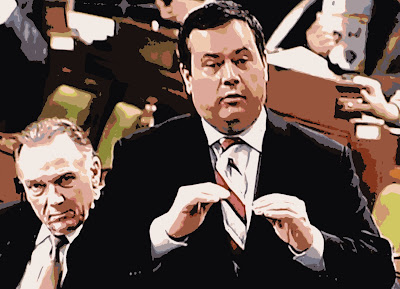 Well it was quite a spectacle. Jason Kenney in the House of Commons, trying to limit the damage of the foreign worker's scandal.

Desperately trying to make it go away.

But the look on Peter Kent's face told the story, showed how much that scandal has hurt the Cons.

And nothing Kenney said will make it better.

For anyone who witnessed that absurd spectacle wouldn't have known whether to cry or laugh.

“As always on this matter, Mr. Speaker, the NDP is wrong,” Mr. Kenney declared. “I do not know whether the Leader of the Opposition has been improperly briefed or whether he knows he is wrong when he says that the rules allow for foreign workers to be underpaid. That is not true.

That said, the answer to Mr. Mulcair’s actual question was apparently yes. Indeed, an hour and 45 minutes later, Mr. Kenney convened a news conference to declare that, a year after it was the introduced, the 15% rule was no more. Only, as Mr. Kenney explained, for entirely different reasons. The original problem was apparently that some temporary foreign workers were being paid too much.

And this won't help either.

Kenney said the rule never meant that foreign workers were paid less than Canadian workers when they were doing the same job at the same workplace. He said less than five per cent of employers used the flexibility that was given to them. "Given the confusion about this and given the fact that it has not been used we decided to end the pilot," he said.

Because that's bullshit. The facts speak for themselves in red, white, and Con blue... 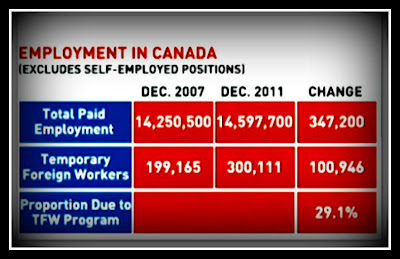 The Harperite cult has deliberately flooded the country with foreign workers. Kenney has been the head waiter or chief headhunter for our sellout business class.

This makes sense only as a policy to depress wages across the board, weaken worker rights and make it easy for businesses that barely look for Canadians to fill vacancies, let alone train new hires.

Those sellouts couldn't be happier. And we're being scammed.

The insiders claim there are bonus incentives for managers of Canadian companies that sign on, promises of big savings that can’t be delivered and violations of work visa rules in the process

And none of this is likely to change, because the Cons have no way of enforcing the new regulations, even if they really wanted to, which they don't. Because Big Business isn't happy.

And the Cons exist to please them... 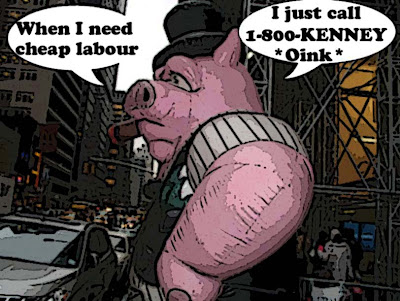 So you can be sure a way will be found to keep their supply of foreign slaves flowing.

You know, the other day I actually heard a really rich guy, from the Bay Street pig pen in whose ghastly shadow I am presently living, say this on TV:

"Why should I pay a Canadian $60 an hour to fix up my kitchen, when I can get a guy from Beijing for $10 an hour? That's what's globalization means."

And I thought... you cheap BASTARD.

And now I'm thinking this:

Those porkers better mind their manners, and become more Canadian in a hurry.

Or we will force them to put up signs like this one in their windows... 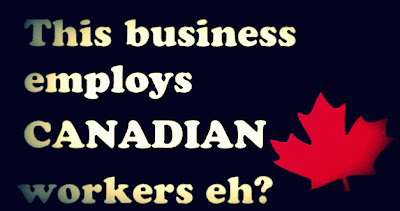 Or deprive them of customers, like they would deprive us of a future.

And for the Con hogs I have more or less the same message:

You betrayed our people. You pimped foreign workers to our greedy businesses, while so many Canadians were suffering. You persecuted the unemployed, cheated them out of E.I. benefits.

You made it sound like they were too useless or lazy to work, while making sure they didn't stand a chance of getting a decent job.

No matter how hard they tried.... 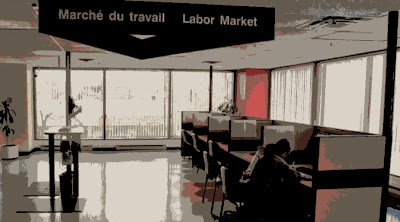 But trust me, we WILL use this against you until the very last hour of the next election campaign. For no weapon in our already very large arsenal could hurt you more.

We will club you like seals, we will mock you, we will shrink you down to size. Until you finally get the message:

And for the sake of our country. Before you turn us into another low wage paradise. 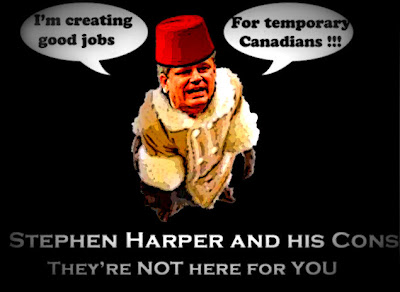 Who is the enabler, of bringing cheap foreign labor into Canada?Harper's Omnibus Bill permits Communist China to sue Canada, if China is blocked their way into Canada. China sued for the mining jobs in BC. Over 300 BC miners applied for the 200 mine jobs, Harper gave to China. Chinese miners earn, $800 per month. I believe this is still in the courts. There are nine mines and mine expansions, going into Northern BC. Who will Harper give those jobs to? BC nor Canadian miners will have those mine jobs? They must speak Chinese Mandarin, to obtain mine jobs, in our English speaking Province.

This is our country, not Harper's nor Communist China's. How dare Harper bring that country, right onto our Canadian soil? He does not have the right to do that, what-so-ever. Harper should be tried as a Traitor.

Great post! The fact that you means someone is reading and liking it! Congrats!foreign worker