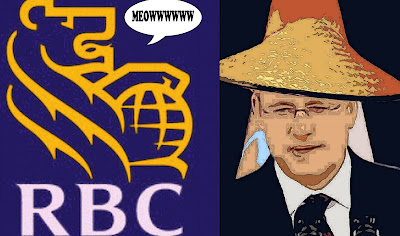 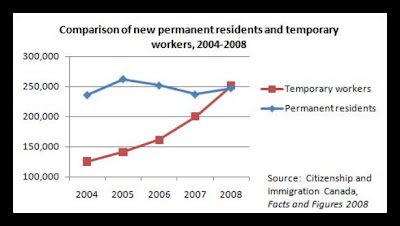 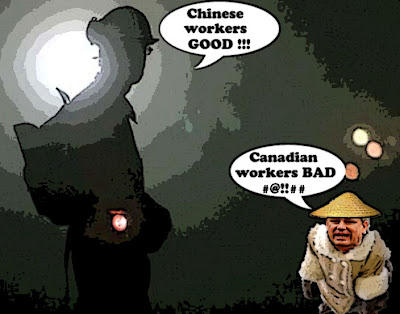 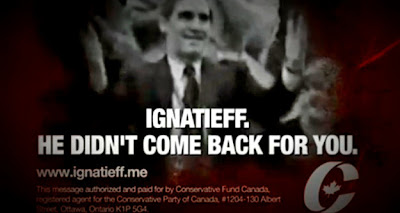 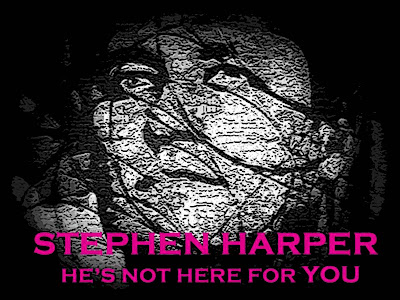 Will be starting to outsource my banking needs to a Credit Union starting tomorrow. The $12 billion/year CEO is the only one needing outsourcing at RBC. Shame, I actually didn't mind dealing with them, but cannot stay on after this utter disgrace.

I don't even know why I bother living anymore, except out of obligation to people. There really is no hope, is there...

hi bcwaterboy...good for you, Credit Unions are far more socially responsible than our big banks. It's just the limit that a bank with all its billions won't train Canadian workers to do the job. Our Canadian business leaders are really pathetic, and of course the Cons are only reinforcing this behaviour...

hi anonymous...please don't lose hope, or despair. The situation is pretty bleak right now. But bad things only motivate people to change them, and once we put a real Canadian government in place, things should rapidly improve. This country is still a young country, it has huge potential, and a bright future. And so do YOU... :)

BCWaterBoy - Just avoid Envision Financial or Valley First (subsidiaries of First West Credit Union). I work there, and our execs are almost as clueless as those of RBC.
I'd recommend going with one of the smaller credit unions, if you can. The big credit unions are beginning to act just like the big banks.

hi bcwaterboy...thankfully Seb handles all my puny financial affairs, because numbers drive me wild with boredom. Although I tell people have a learning disability eh? ;)
But seriously, I still can't get over that a Canadian bank could be so cheap. They should be leading the way helping to fund training centres that could train young people for the challenges of tomorrow. But no. Now they are claiming they are just moving the whole department overseas.
As if that makes it better. Gawd. We're such a huge country, so why is everything in Harperland so very very SMALL ?

I am sure everyone remembers? Ex BC Liberal Premier Gordon Campbell works for Harper. He too twice lied and cheated to win his elections too, just as Harper did. CSIS did warn of, China's huge inroads into Canada. BC was specifically mentioned, Campbell gave BC to Communist China a long time ago. He shipped BC mills to Red China, along with their raw logs. Red China had our mines. Campbell had China send their people to school, to learn 100 English words, so they could take our BC mining jobs. As hard as we tried to warn, Harper and Campbell are snakes in the grass, no-one would listen to us. That dirty duo, belong in prison. Campbell's two election lies. The BCR wasn't for sale. Second election lie, the HST wasn't on his radar either. Caught in a lie. Campbell had to admit, the HST was plotted with Harper, long before the BC election. Harper and Campbell will make, excellent cell mates. One is just as evil as the other. Neither one of them have any, decency, ethics nor morals, what-so-ever. Harper rewarded Campbell the post of, High Commissioner to England, for doing his dirty work for him.

Harper giving Canada to Communist China, began way back in Campbell's reign of terror. May the both of them have to watch their backs, every living day of their lives. They are both evil, disgusting, revolting and, the scum of the earth.

Harper's list of degenerates, is as long as your arm. Gordon Campbell, Bruce Carson, Del Mastro, Wenzel, Parker, Front Porch Strategies, the robo-call crew, Boessenkool, Duncan, Brazeau, Porter, as well as warrants out for him and four of his henchmen, Penashue and, some of his very dicey Ministers. If I missed any? Please add to the list of Harper's degenerates.

Harper was Policy Chief for his, Northern Foundation Party of 1989. Once you read that? His character is pathetically easy to see through. Harper has carried his old Fascist policies, right along with him. Harper doesn't govern, he dictates.

Quite frankly? We don't give a damn, if Communist China sues the @$$ off Harper's evil Canada. This country isn't Canada anymore anyhow. We should be leaving, Harper, Ottawa and Alberta as their own country? Who in the hell needs that kind of crap. Was it four houses, the tax payers bought for Harper's minions?

Welcome to HarperLand - where Steve stands for corporate profit, not Canadians! He'll even rejig the system to allow the banks to cut wages costs so they can ADD more to the billions they already make in profit, every quarter. While firing CANADIANS. Who have to sit at home and watch 'Action Plan' commercials about how great the job market and economy is! Well, all the 'action' is for low wage foreign workers, apparently, and the only 'action' CANADIANS are getting is from opening an EI cheque. Unless HarperLand has cut them off from that too. HarperLand - 'Elected by the corporations - FOR the corporations.' This RBC case is just the tip of a very large iceberg. Temp foreign workers are being used everywhere in our economy (e.g., pilots, skilled trades etc.and the original reason for low-skilled positions such as seasonal farm labour.) The HarperLand traitors in Ottawa also recently made it even more lucrative by allowing firms to pay these foreign people 15% less than Canadian workers. And then they have the gall to run Action Plan ads touting ‘jobs and prosperity.’ Remember this story next time you hear business and government leaders bemoaning the skills gap, and the need for foreign workers for Canadian business to remain competitive. iGate is one of the biggest users of the American HB1 visas: not Microsoft, Apple or Google. They don't bring in talent we don't have, they bring in talent for less. It is all about wage reduction.

No time to cry -Hold RBC responsible - Not IGATE, nor the Government, nor the foreign worker. - Take action NOW - Let RBC know that without customers, there is no Bank, let the Government know that without taxpayers, there is no Government ! Force RBC to immediately re-instate those 45 employees and to severe all ties with IGATE. We do not need a government law that is faulty anyway, to protect our interests. Outsourced foreign workers do not pay taxes, nor are they customers of RBC. -Only WE the customers are and so we can and are free to decide what happens. Yes, we have the power. SIMPLY start a run on RBC, opening & closing accounts, with just a dollar and jam their call centre with simple nuisance calls, until RBC behaves like a true national canadian, sustaining canadian jobs who are their customers and taxpayers, without which there is no government.

Don't forget about the Insurance branch of RBC. iGate is used throughout the organization, and Canadian workers are being told to train the iGate people (so that they can be replaced!)

Employer can't find people to work for them says I guess I'll offer to pay them more . Supply and demand.
Conservative says no don't do that . I'll find you someone for even less and your competetors too. He gets a warm fuzzy feeling all over and thinks my boss Harper is gonna love this.

hi anonymous...I won't forget about them or any of the other banks, because from what I hear they are all outsourcing jobs to India or wherever. And they are all going to pay for it...

hi anonymous... exactly, you hit the nail on the head. If employers want Canadian workers they should either train them, like they do in places like Germany, or pay them more. For far too many big companies, particularly in the service sector, don't pay their employees enough to live on...

"CANADA" is a corporation http://www.sec.gov/cgi-bin/browse-edgar?company=canada&owner=exclude&action=getcompany

why would these jackasses "work" for you?

get your heads out of your asses all of you

this is not a request

stop paying pirates to not rob you