The Ghastly Legacy of Margaret Thatcher 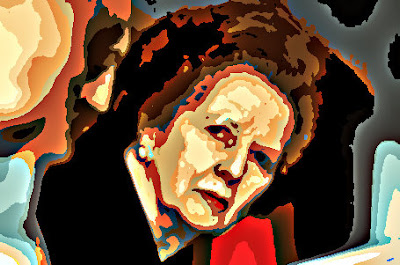 This time I waited until I was sure she was dead before I started celebrating eh?

And I was halfway through a bottle of cheap wine, until I realized it was only John Baird's pussy who had passed.

But now ding dong she's really gone, and I'm making up for that bitter disappointment.

For she was truly a monstrous Con, and her hideous legacy still haunts us all, and lives on in a broken Britain.

When she arrived in Downing Street in 1979 she talked about replacing discord with harmony. She may briefly have meant it, but the harmony she sought in the long term was one whose terms were set overwhelmingly in the interests of the British business class as she perceived them

There should be no dancing on her grave but it is right there is no state funeral either. Her legacy is of public division, private selfishness and a cult of greed, which together shackle far more of the human spirit than they ever set free. 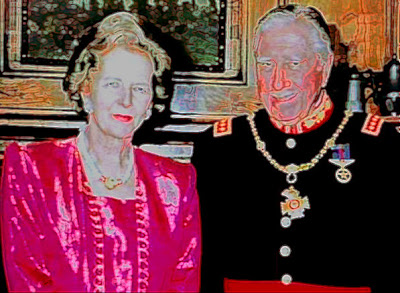 She was a friend of fascist dictators, a warmonger, a brutish ideologue, a ruthless enemy of working people and their unions. She helped spawn the greedy capitalist parasites who triggered the recession, and condemned billions to poverty.

And as if all that wasn't enough she was also a sworn enemy of gay people.

“In 1988, the Thatcher government legislated Britain’s first new anti-gay law in 100 years: Section 28. At the 1987 Conservative party conference she mocked people who defended the right to be gay, insinuating that there was no such right."

“During her rule, arrests and convictions for consenting same-sex behaviour rocketed, as did queer bashing violence and murder.

So Cons all over the world, and their stooge media, can mourn her passing. Boo hoo. Drip drip.

And Stephen Harper, who would be our Margaret,  can genuflect and blubber before her ghastly legacy.

"She was not just a great leader for Britain but she was really one of those people who will be a truly historic figure, remembered for centuries to come," Prime Minister Stephen Harper said during an event for the Order of Hockey in Canada on Parliament Hill. 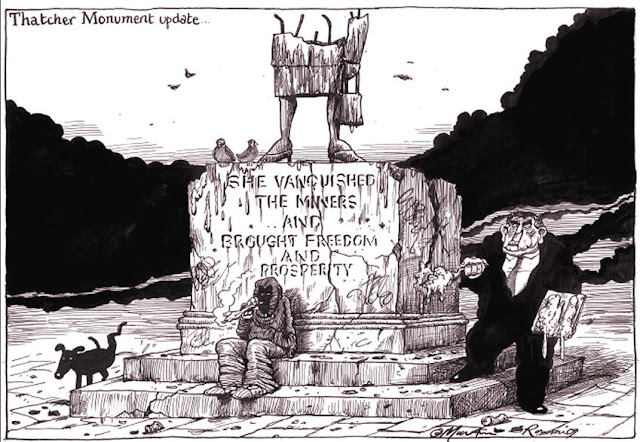 But I see no reason to mourn her. Not when I look at my diminished country and see what Thatcher's legacy is doing to it. Not when the Con regime is preparing to condemn millions to misery just like she did. With their insane Porky Action Plan to strangle government, and kill jobs.

Nearly 29,000 jobs will be wiped off the federal payroll by 2016 and the impact on services for Canadians will be much more dramatic than originally estimated, according to a report from the Canadian Centre for Policy Alternatives.

There's nothing great about that. And she wasn't great either, just a reactionary, heartless, right-wing Con.

But since you have to try to find SOMETHING good to say about any dead person eh?

I will say this: nobody can deny that she WILL be remembered for a long time.

For her crimes, her cruelty, and everything she did wrong.

And for precipitating the final crisis of capitalism... 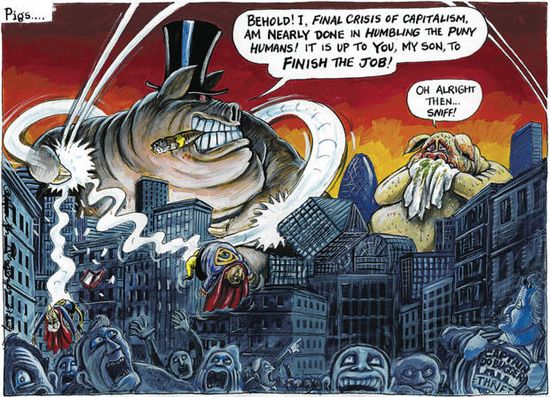 Due to the final crisis of capitalism, I'm saving the champagne for the day we defeat the Harper regime eh?

You beat me to it .ding dong the witch is dead and Reagan poo

Thatcher's legacy lives on in the millions of unemployed people who can thank her for laying the groundwork for the global economic disaster that will linger for years to come. Like tyrants before her, she is not to be mourned, she is to be scorned. Good riddance to a truly awful and wretched human being.

Thatcher called Nelson Mandela's liberation movement a terrorist organization; and she opposed sanctions on racist South Africa..what else needs to be said about that right wing moron, hey? So naturally our own Crime Minister is singing her praises.. and said she and Reagan and the Pope ended the Cold War..as if a guy named Gorbechev had fuck all to do with it.. glasnost and perestroika and all that.. Gorbachev of course is the one individual who deserves the most credit for ending the Cold War. And the labor unions sure played a part, but no right wing Con would ever admit to knowing it. The Rooshkeys did themselves in by going broke on the arms race, and on their Afghanistan debacle - not by anything Cons Ronny Raygun or Thatcher did. They just gleefully took credit for it. Kinda like how Harper takes credit for the Canadian economy (his economic ‘policy’ being basically – be happy you aren’t a Europeans!) when he hasn’t done anything but destroy our economy - and thank your lucky stars for Martin and Chretien’s sane fiscal approach, previous, or Harper would have done us in entirely, already. In fact Reagan and Thatcher’s deregulation/privatization policies have caused the decline of public infrastructure, the middle class and established the corporate robber baron idiom etc to the point we’ re still paying massively for it, and Harper is only perpetuating that stupidity here in Canada. Harper also said he met Thatcher in 2006, saying she offered wise and gracious advice, but she had dementia ever since 2000, so I question Dear Stupid Leader's ability to discern "wise advice" when it's given. Like Thatcher, as a douche right wing Con, Harper emulates Reagan in promoting lower taxes, pushing deficits and debts into the stratosphere, and flag waving phony patriotism tied to jingoistic warfare, to beat his bravado chest. Harper used the Afghanistan War and the Iraq War in exactly the same way that Thatcher used the Falklands War - to promote himself as a military tough guy who ‘stands behind the troops.’ But then cuts their benefits after they come back.. which is your typical Con double standard load of crap and all these quasi-fascist reprobates do it. Personally, I find the media fawning of the right wing in response to Thatcher's death irritating. She’s croaked. Who gives a shit. Bad riddance. May the 'iron lady' rust in peace.

Shit, Wazz! You should stop being so timid and tell us how you really feel! ;-)
I couldn't figure out why I kept getting this nauseous feeling every time I heard another lament for the fascist dictator thatcher on the radio yesterday. Now I know why. Because I'm not a moronic, sociopathic fucking idiot who believes all that right-wing, wingnut bullshit. And to you on the so-called "progressive-conservative" right who read this blog that have something "clever" to rebut this, I simply say: "FUCK YOU, YOU FUCKING FUCKS!"
Oh, yeah. One last humble observation. Ever notice how, when the con(men) are in control (as in control freaks), the police forces get insanely much more aggressive and are almost overjoyed at the prospect of attacking and maiming the people that actually pay their goddamned salaries? See britain and Canada's G20 for references. "Who's their enablers?" me wonders. Wassup with that?
Gonna go watch the "Wizard of Oz" one more time just to keep the warm fuzzy feeling lasting a bit longer. Cheers!

For all her horrors, the vehemence of her homophobia-fueled anti-gay crusade was one I was heretofore ignorant of. Thank you Simon, as always, for pointing it out. For more reminders of her impact, a friend sent me this link: "21 Incredibly Angry Songs About Margaret Thatcher" http://www.buzzfeed.com/angelameiquan/21-incredibly-angry-songs-about-margaret-thatcher

hi anonymous...I might have beaten you to it, but about a million people beat me to it. There's even a campaign in Britain to make the Wizard of Oz song number one, by downloading it from I-tunes. No Con more richly deserved it...

hi bcwaterboy...It's entirely fitting that she should die just a few days after her spawn in the Cameron Con-Lib coalition launched the most brutal assault on the poor, the elderly, and the disabled, that country has seen since her brutish regime. I urge Canadians to inform themselves about what is happening in Britain, because I've never seen such cruelty, and it's what the Harper Cons are planning for Canadians...

hi wazz...great comment. And so true. I'm absolutely appalled to see how even semi progressive newspapers like the Toronto Star are falling over themselves praising her. When she caused immense suffering, was a ghastly bully and bigot, and as I pointed out in the post, her policies led to the greed that almost brought down the capitalist system. It boggles the mind. And I wish I had used this one:

May the 'iron lady' rust in peace.

hi Scott...thanks for the link. I'll use them at the party on the day they bury her. And yes, I thought it was horrible to see how none of the bubbly obits in the MSM mentioned section 28, that was aimed at gay children and caused immense misery for thirteen years. When I was younger I used to wonder why if you said the word Thatcher in the Scottish highlands, the sheep would scatter, and the people would come after you. But now I know better... ;)