The Harperland Spring and the Partisan Nightmare 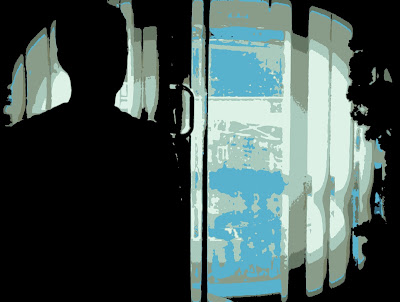 When I woke up today, the sky was blue, the sun was shining, and for a moment  I thought that Spring had arrived in Harperland. Finally !!!!!

But then I stepped outside, realized that it was still horribly cold eh? And my day went rapidly down hill.

Before I could even finish my first coffee, it was Sean, my very good and very NDP friend, on the phone and very angry: "Since when did YOU become a LIBERAL?"  #@!!!

Just because I wrote a post last night about how I didn't think the Con Attack Machine would damage Justin Trudeau. And even though I also defended Tom Mulcair when the Cons attacked him.

So that ended badly eh? But he wasn't the only one, and when I read the comments there was also stuff like this:

I like your blog Simon, but if you insist on defending Justin I must remind you of the old adage, if you lie down with dogs, you wake up with fleas.

And I have to admit it saddened me, because I thought people knew that although I'm closer to the NDP than to the other progressive parties, I have always tried to be as non-partisan as possible. And encourage them all.

So that the day the NDP and the Liberals merge, which they almost certainly will, I can help bring the warring parties together, in the best peacemaking tradition, and they would all know that my motives were noble.

And that all I was ever interested in was defeating this ghastly tyrant... 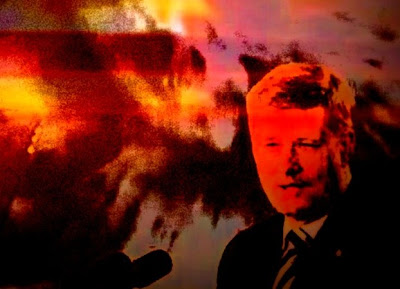 Who is KILLING my beautiful country.

The one who even now is planning to risk its very future, by tarring the NDP and the Liberals with the SAME brush.

First fanning the embers of sovereignty in Quebec.

The Harper government just doesn’t get Quebec — never has and never will. The Conservatives are tone deaf in this province. Either they have no idea what resonates with Quebecers or they just don’t care if their policies wind up offending people here.

The storm is gathering in Quebec and there will be no shelter for the Conservatives.

And stirring up the separatists.

Then pitting English Canada against Quebec, like he did during the prorogation crisis. While claiming that the NDP is riddled with separatists, and that Justin Trudeau can't be trusted because he once said he might join them.

So in that sense both parties will end up in the same boat, whether they like it or not. Or splitting the vote and going down together. Along with the country.

But don't mention that, or the words "coalition" or "merger" or they'll BOTH come after you. Welcome to my partisan nightmare.

Oh well. That'll teach me to write about party politics. I won't be doing that again for a while. Life's too short, and there are too many partisans.

Maybe I'll write about other things. Or maybe I'll reinvent myself.

Like this mural I came upon seems to be suggesting... 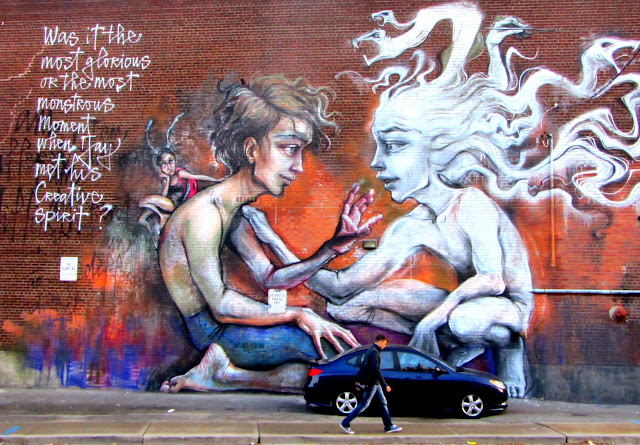 Head off in a different direction. Or take a creative risk like the one progressives will one day have to take, if this country is going to survive.

Because I'll never stop dreaming about that eh?

And in that regard I'm happy to report that this horrible day ended well. When Seb in an attempt to cheer me up read me something from of all things his horoscope.

What Tinkerbell, of all people, told Peter Pan:

And it worked. It seemed strangely fitting.

We will all meet one day in that dream place. And I will be waiting. Impatiently.

We will be united.

We will crush the Cons and drive them from power for a generation.

And in the meantime, if we're very, very lucky eh?

Spring WILL arrive in Canada... 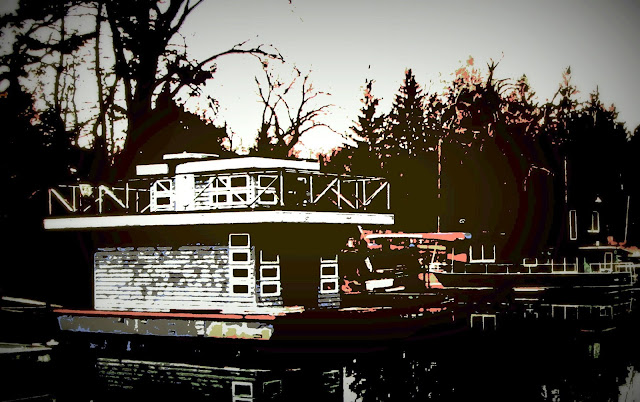 Hi Simon.
I believe I stand to the left of all the parties up here, like you. I see virtually no difference in the "progressive conservatives" (an oxymoron if there ever was one) and the so-called liberals. They both are sycophants to their corporate masters from everything I've ever seen. The NDP just seems to be the party of liberal-lite. Not quite as noxious as the other two but still willing to drop to their knees and open their mouths when somebody whips out a nice fat wad, just not quite as quickly for appearance sakes. Canada has no real progressives party, Simon. We are bouncing from one kabuki show to the other just because they put a new coat of lipstick on the same old pig. Don't let your NDP "friends" (with friends like that guy, who needs enemies?) get you down. At the end of the day, it's all the same tired old meaningless political rhetoric, just like in the united states. None of it means a fucking thing once they are re-elected and then we find out we're back in the same tub of shit we thought we just got out of, or worse.
Politics has nothing to do with the welfare of real people. (Thwap is starting to sound more and more logical . . . kind of scarey :-) )It hasn't for a long time. It's not profitable enough if you actually work for your constituents, you see. Think about it.
"Illegitimi non Carborundum" as my old professor used to say. Cheers

There were a lot of trollish comments yesterday.

By the way, nobody commented on your Justin Voodoo doll. Maybe Poutine and company were here claiming to be dippers.

Trudeau is far from perfect, but he's the one who has a chance to win based upon his own personal brand, which I said yesterday, is in large part due to his boxing prowess. Don't underestimate the importance of the image of him taking on Brazeau and how some, maybe many will see that as an indicator of future behavior.

Keep up the great work.

I wasn't trying to censor you. I'm trying to help you. The Liberal Party can't be trusted, they'll stab you in the back like they have in the past. Do you remember the Chrien years where they brutalized Healthcare, Education, the Gods knows what else?

Do you remember when the NDP reached out a hand across the ailse and got handed back a bloody stump from Iggy after the Coalition attempt?

Thier is only one way to beat Harper, for either the NDP or Liberals to crush the other. Trudeau has made it clear merger doesn't interest him.

When one comes out on top they'll have the strength to be Harper. His popularity is already fading.

If its Trudeau who comes out on top can't you see what a disaster that will be for Canada? If its a minority he'll make an alliance with the Tories and put a kinder face on the monster that has been ruling this country.

2015 will be the battle of battles and you have to pick a side if you want Harper defeated. You can't afford to be everyones friend. The choice is yours.

Ryan, you are so wrong that even a child would understand that. NDP goverments are know to not do well provincially and because they are from the same cloth, probably not federally as well. Mulclair gas not made many strides with non NDP people and there is a very good reason for that, by the remarks that i am seeing and hearing,

In other words, it is like listening to Harper all over again. In complete honesty one Harper like leader is more then enough. BTW your party can take the blame for Harper s success so cut the crap already.

hi anonymous...yes, like you I am to the left of the progressive parties. I know there are good people in all of them, but they don't speak strongly enough about the big issues I'm interested in. Like the collapse of the capitalist system, or climate change. They seem to me too small and timid, like the characters in a puppet show, going through the motions, as the rich bring down the hammer on the poor, and the planet burns. However, I realize we have to use the system and the people we have in place if we are to evict the Harper Cons. For nobody is as dangerous as they are. So I do want to see some kind of broadly based coalition take them on. First we must stop the bleeding, and then we can try something different. As for my NDP (and Liberal and Green) friends who give me a hard time I still love them all. I don't mind getting mugged by them. But only when I deserve it eh? ;)

hi anonymous...yes you're right somebody should have commented on my Justin Trudeau doll. Lord knows I produce some really awful photo shops, but I'm rather proud of that one. ;)
As for Justin Trudeau, I don't agree with quite a few of his policies, but I think it's only fair to see what he does as Liberal leader before I judge him. And the point of that last post was to defend him from the filthy Con Attack Machine, which symbolizes bullying to me, and I would do that for anyone...

hi Ryan...the only thing I objected to was being accused of lying down with fleas, which I haven't done since my poor old dog died a few months ago. And especially not when all I was doing was pointing out that the Con Attack Machine would probably bounce off him at this point. I was NOT endorsing his campaign or his policies.
I am considerably to the left of the NDP, so I am more likely to vote for them than the Liberals. I'm happy that I live in a strong NDP riding and can vote for people like Olivia Chow. And if I'm still here in two years, I'll vote NDP again. But I also believe, for the reasons you mention i.e. one has to crush the other to win, that inevitably the two parties will be forced to merge. Because if one doesn't crush the other they will keep splitting the vote. So SOMEBODY has to be friends with both sides, even if I can only vote for one...

Iggy was the worst thing that happened to Canada. In such a crucial time, the LPC stabbed Dion in the back and put forward the worst possible Opposition Leader ever.

That said Ryan, I would not ever say that the Chretien government was anywhere near as toxic as the Harper government. Even the brief tenure by Paul Martin was nowhere near as toxic as Harper. I want a progressive society that takes care of the disadvantaged and creates opportunities for the poor, that respects and protects the environment, the decries imperialist wars, that advances human rights over religious edicts, etc. Do I think that the LPC or NDP are up for the job for creating such a just society? Not in a minute but they have a more likely expectation to maybe move towards such goals.

Sorry to be off-topic, but where is that mural? Pretty please?

hi J...It's on Dundas near Broadview I believe. There is also an interesting story associated with it. It was drawn by two German artists and it's part of a story drawn on different walls around the world. Somewhere there is also a Vimeo video of the mural being drawn. Hope you enjoy it as much as I did...

Thanks a lot, will go check to it out.