The Disastrous Decline of the Con Regime 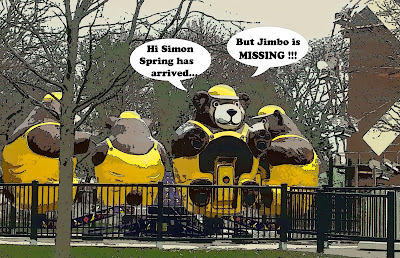 It was such a beautiful day, the first real day of Spring, that I spent hours pedalling around my magic island, out of touch with the rest of the world.

So it wasn't until I met the three four bears at the little vintage amusement park, that I heard the stunning news. Little Jimbo Flaherty was missing in action !!!!

Is it time to put Jim Flaherty’s picture on a milk carton? The federal finance minister has not graced the House of Commons with his presence since he presented his 2013 budget a month ago.

For a federal finance minister to drop off the parliamentary radar for a full month is rare. When that month happens to immediately follow the presentation of the budget, it is unheard of.

So I did the only thing I could think of eh?

And put out an Amber Jimbo Alert... 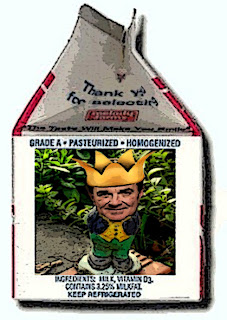 Only to realize when I got home, that Jimbo isn't missing, he's HIDING !!!!

Canadian policymakers should consider easing up on austerity measures while the economy is weak and vulnerable to shock, says the International Monetary Fund (IMF).

The report suggested that Ottawa loosen austerity measures around mechanisms to stimulate growth, such as unemployment insurance, if the economy continues to weaken.

And who can blame him eh? Real economists are telling him to ease up, but he's doing exactly the opposite. Killing jobs, slashing services, and squeezing the unemployed. So no wonder he doesn't dare show his face. If I was him I'd wear a burka. Or resign before he's arrested for gross incompetence.

But here's the bizarre part. Jimbo wasn't the only Con missing in action today. Stephen Harper was also nowhere to be seen.

But of course, I knew how to find HIM. I just followed our new ambassador to Jordan.

The RCMP officer in charge of Prime Minister Stephen Harper’s security is to be appointed as Canada’s ambassador to Jordan. Supt. Bruno Saccomani, who has been in charge of the prime minister's security team since 2009, will also be overlooking affairs in Iraq.

Last year, leaked documents revealed many working under Saccomani saw him as bully; the prime minister defended him then, as the government did Thursday.

And sure enough, it wasn't long before I found Great Ugly Pretty Leader.

Sulking in his War Room.

Screaming at his voodoo dolly... 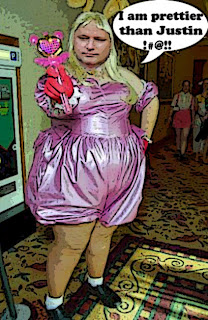 Still claiming his attack ads had made Justin Trudeau look like a girly man. Even though the reviews have been positively devastating.

Not everyone wants to spend their youthful years following the career of Margaret Thatcher, bosom buddy of Chilean dictator Augusto Pinochet — as Harper did, according to the Encyclopedia of World Biography.

Attack ads are stupid and childish. They don’t reflect poorly on the person attacked — they only reflect on the attacker...The ads also suggest that the attacker is running scared, feeling threatened and maybe even a little desperate.

So no wonder he doesn't dare show his face either eh? If he did, people would probably boo him, or tell him to keep his pants dress raincoat on.

And that made me think that Lawrence Martin must be right. When old, burned out, scandal ridden governments start to collapse, they don't just fade away. They crash and burn.

It’s a strange and scary trend, especially if you’re in government. Over the last half century, Canadian governments that have been in power for long periods have met with dismal reckonings. They don’t just lose, they collapse. They crash, they burn, they go down like the Hindenburg.

Because when I look at the state of the Con regime, the corruption, the scandals, the patronage appointments, the mishandling of the economy, the desperate leader obsessed with trying to screw Justin Trudeau.

It's pretty obvious it's going down too... 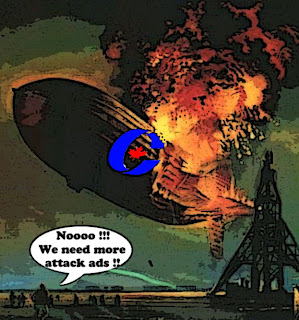 And even sooner, and more spectacularly than even I had hoped.

Which of course just about made my day.

Because it turns out the bee was right after all eh? 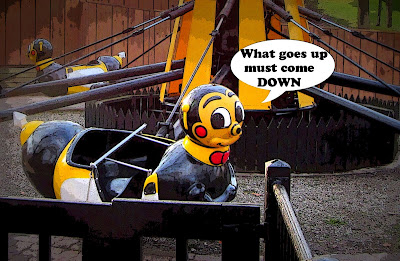 And so was the bear.

Our long winter of the soul is nearly over.

And spring is finally here... 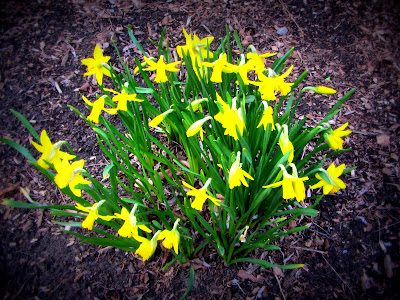 The most dangerous animal in the world is the wounded, cornered one especially if it has a mind to take as many enemies down with it as it can (see "kamikaze" for a loose parallel). Anthropomorphization (new word for libs and NDP's only -- cons too fucking stupid to figure it out because it applies to them, you see) of cons is permitted.
There you have it. Terse, concise, succinct and to the point.
Happy Friday!

The U.N Security Council asked Harper to join 60 other countries, to refer Syria to the ICC to be prosecuted for, war crimes and crimes against humanity. Harper refused. Seems, ICC found Harper guilty of, stonewalling and blocking their investigation on, torture of the detainee's. Harper prorogued Parliament, to get away with his crimes. ICC was to also try Harper, for war crimes and crimes against humanity. Harper jumped right in, to bomb Libya. Harper did not declare war on Libya. Libya did not declare war on Canada. Many innocent people of Libya were killed by Harper. Little children with, their arms and legs blown off. No wonder the U.N. Security Council, banned Harper a seat. Harper pitched one of his hissy fits over that. World Organizations, don't seem to trust Harper.

There was a formal letter sent to the RCMP, gory details included. You can find the letter on the web site of, nightlanterns.ca

I have no idea why, Harper is not in prison. He is one evil s.o.b.

Till they actually don't. You said the same shit before the last election and no doubt the one before it. So often wrong Simon, so often wrong.

Do tell us all when you plan on getting it right?

hi anonymous...yes, Harper is starting to remind me of a wounded hippo, and I agree he is dangerous. But it also means that him and his gang are more likely to make mistakes, and we must make sure that we take full advantage of them. And yes the anthropomorphization of the Cons will continue, after I visit the tarantula exhibit at the Science Centre. Have a great weekend !! :)

hi anonymous....I have no idea why Harper and his gang are not in prison yet. But I'm working hard to make sure that happens after the next election. I also insist that him and his gang be paraded through the streets of Ottawa in cages, for the entertainment of Canadians, before they are condemned to life behind bars, or even better forced labour in the Tar Sands...

hi anonycon...you know I'm surprised that Cons like you can't see that the Harper government is slowly imploding. Where's your fear gland when you need it? Can't you see that Canadians are just so tired of those same old faces, and want ANYBODY but them? The bar is now so low you should of running yourself. Or ask your corrupt leader to appoint you to the Senate. If Duffy and Brazeau can make it so can YOU !!!! :)