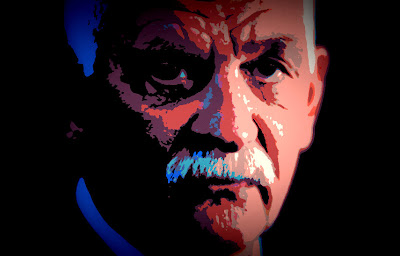 He is, after his depraved leader, the most brutish Con of them all.

A religious bigot, a ghastly hypocrite, a political thug who has spent a lifetime attacking judges, and jailing Canadians.

For he cannot jail enough of them. Or violate our liberties enough.

And now he's out of control.

A federal cabinet minister rejected a request for a prison interview with former Guantanamo Bay detainee Omar Khadr even though the warden gave it a green light — a move some are denouncing as extraordinary political interference.

Because let's be clear eh? It's bad enough that the Con regime is still punishing a Canadian child soldier who spent ten years in Guantanamo. It's beyond the bounds of human decency, a foul and dirty thing.

But when Toews and the Harper PMO start deciding how prisoners are treated in this country, or running our prisons like their own private gulags, we are not living in Canada anymore. We're living in a Con police state.

And this only makes things worse.

After it was revealed this week the RCMP doesn’t want its top brass meeting with parliamentarians without clearance, Public Safety Minister Vic Toews says there is a “communications protocol” between his office and the RCMP for a very simple reason: so he can keep tabs on his file.

For surely a man who demands such total control over the RCMP, cannot claim that he was in the dark about this:

Toews also spoke at length about the Via terror plot. He said he’d been briefed on the investigation on an ongoing basis since at least last fall, but only found out about the arrests of the two suspects minutes before the RCMP made their move last Monday.

And it begs the obvious question: did the Cons orchestrate the timing of the RCMP announcement, to stampede approval of their totalitarian anti-terrorist bill, and try to follow up Harper's disgusting attack on Justin Trudeau ?

Because this doesn't cut it in my book:

When asked why the RCMP moved in on the two suspects when it did – in spite of requests from U.S. authorities to hold off — Toews said the RCMP was “working towards a schedule” and one of the individuals began to act “in a strange manner” after the Boston bombings.

And we all know how Vicky is obsessed with Justin...

And how he drives him KRAAAAAZY... 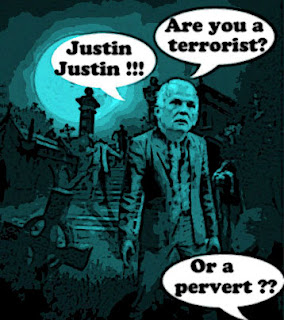 But of course, it's not just about Justin, and it's no longer funny. It's deeply disturbing.

Because if the Con regime is turning the RCMP into a political police force. If they are now running our prisons, and abusing their power for political purposes, this country is in real trouble.

I realize that far too many Canadians are complacent about the state of our civil liberties. Too young, too ignorant, too old, too tired. It's the Canadian way eh?

But to allow a regime as morally corrupt as the Harper cult to erode our liberties, at such a dangerous time in human history, isn't just extremely dangerous, it's absolute MADNESS.

For remember, Vicky and his Orwellian gang from the so-called Ministry of Public Safety still want to read our e-mails.

Still want to know us better... 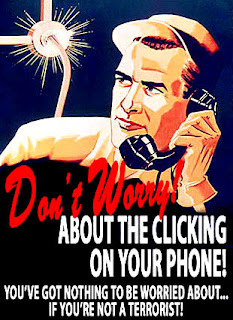 Still want to know whether we're with them, or pedophiles and/or terrorists.

And if we are hit by a sudden shock, like an economic collapse, or a pandemic, or a terrorist attack, that complacency about civil liberties will come back to haunt Canadians.

And they will wake up in a very dark and scary place.

And the good news? Those who would destroy our liberties, also risk destroying themselves.

Because if the RCMP is ever determined to have allowed itself to be turned into a tool of the Con regime it will have to be disbanded. Because nobody could ever trust it again.

And if Vic Toews and the other members of the Harper gang are ever found to have conspired to turn the RCMP into their political police force, they will be forced to resign. And could even be arrested.

Golly. Wouldn't that be ironic eh?

And a fitting end to this foul regime.

The gang who would steal our liberties, and be our jailers.

Having their own liberties confiscated.

And ending up where they belong... 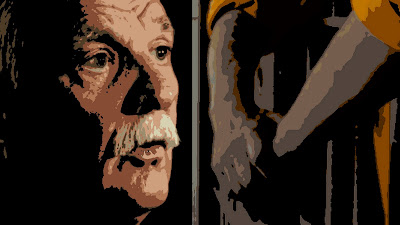 As it is, I'm already not so sure that I could ever trust the RCMP again. I write this with a great deal of sadness.

A powerful indictment, Simon, of this foul and corrupt regime. I am doing my best to spread the word about your post on Twitter and Facebook.

I read quite sometime back. Harper was Policy Chief for his, Northern Foundation Party of 1989. When Harper's caucus accused Harper of being a control freak? I remembered what I had read of. It was claimed, Harper is a Neo-Nazi. What ever that means? Six members of my family, fought in WW11. Our young Canadian boys, died for nothing. Harper is most certainly not worth their dying for.

No-one will ever convince me, Canada isn't a Fascist Dictatorship regime. The Police state, control, lies, deceit, corruption, thefts, dirty politics, dirty tactics and cheating to win, is totally Fascist. Our old WW11 Veterans say? That Harper is exactly the reason Canada went to war. We went to war, to fight a Fascist tyrant. Canada did not want such as Harper governing this country. The Vets say, we are in a Dictatorsip, no different than Germany's. All Dictators have the same typo personalities. Stalin, Hitler and Mussolini were very similar in personality. So is Harper's personality similar. Harper is very low of character. His intent is evil.

Harper's dirty attack ads of Justin, are for what? Is Harper calling an election or something? Harper is every bit as wacko as Hitler, Stalin and Mussolini were.

I'm sure everyone kmows? The Campbell/Clark BC Liberals, all work for Harper. You remember Harper's favorite henchman, ex BC Liberal Gordon Campbell? Harper rewarded him the post of, High Commissioner to England, for doing his dirty work for him. Gordon Campbell twice cheated to win his elections, as Harper did. You know of the election coming up in BC? We detest Christy Clark, she works for Harper as, Campbell did before her. Rumor has it?? Harper's trolls are visiting BC web sites, supporting Christy. I won't be surprised if that election isn't cheated, just as Harper and Gordon Campbell's were.

We all know what Toews is. Of course he knows all about Police states. I'm sure he remembers all of Hitler's dirty tactics, with his Brown Shirts. Police are not permitted to speak with any of Harper's henchmen, without the head of the Police state, giving his approval.

The list of Harper's degenerates, is as long as your arm. Gordon Campbell, Bruce Carson, Wenzel, Parker, Front Porch Strategies, the robo-call crew, Del Mastro, Boessenkool, Brazeau, Duffy, Penashue, Toews, Porter and four others with warrants out for their arrests. You can add the ones you know of.

However. Decent Canadian citizens are, surrounded by criminals and monsters, of the very worst kind. We are living in, very evil times.

If anyone thinks I am wrong? Convince me?

hi Brian...I wouldn't blame you if you didn't because the force really has taken its knocks recently. But the way I see it there are decent men and women who work for it, and only they can save it. If they see the Cons trying to turn it into their own private police force, they should leak that information to the opposition or the MSM. Only honesty will save them, and only the truth will set us free...

hi Lorne...thanks a lot. Like you and others I just can't stay silent while the Cons corrupt our country in such an appalling fashion. As I've said before, I could never have imagined such a nightmare, that something like that could happen here. But I do know this; the Cons are desperate and totally devoid of Canadian values, and if we don't stand up to them this nightmare will only get worse...

Abuses noted, but we are still living in a functioning parliamentary democracy with its institutions intact, have the means to resolve issues peacefully, including a change of government, and are not on the verge of civil war. Verbal abuse and a bloodthirsty vocabulary notwithstanding, Harper supporters have not - yet- taken it upon themselves to physically attack and disperse, ie terrorize, their opponents.

There are multiple nuances between forms of military dictatorship, Napoleon II shutting down the French legislature, abolishing the Republic and declaring himself emperor, or Pinochet's military coup, and out and out fascism - that is a mass reactionary movement violently targeting and seeking to crush trade unions, minorities, the left and liberals and beyond that all strains of independent and critical thought. A little perspective, people, Harper's minions have not been transformed into the Black Hundreds and we are not on the verge of reliving the events of the Spanish civil war - now that was a genuine battle against fascists.

As for an historical appreciation of the second world war, Canada is still divided on that score as there was mass anti-war sentiment and mass arrests in Quebec, not borne out of fascist sympathies, but out of a reluctance to fight for the colonial possessions of England, France, or Belgium or to engage Japan over control of the Pacific..

If I recall Pierre Trudeau was kicked out of the Officer's Training Corp for the support he gave to the anti-conscription campaign of Jean Drapeau in 1942, at a time when President Roosevelt was engaging in correspondence with the Prime Minister of Canada proposing the anglicization of Quebec. Hardly respect for democracy and minority rights, or grounds for those targeted to enthusiastically enlist....

Agreed, Simon, there are indeed some very fine men and women working in the force. And they're so fine that they may, if given a chance, pull the force into the light.

hi anonymous...as I've said before I don't consider Harper a neo-Nazi, just a ghastly right-wing ideologue and religious weirdo with delusions of grandeur. But yes, him and his Cons are a danger to everything decent in this country, and we must channel our anger into defeating them in the next election. We know the problem, we need a solution...

hi Rene...I agree with you. The situation is dire and depressing, and the damage that is being done to this country is almost unbearable. But we still have the democratic instruments to end this nightmare. And the challenge is to make use of the ones we have, and come up with new ways to mobilize the population to vote in the next election.
I understand the anger out there, I contribute to it by relentlessly documenting the excesses of this foul regime. But anger is only useful if it is channeled into constructive organized ways to defeat the Cons by casting more votes than they do...