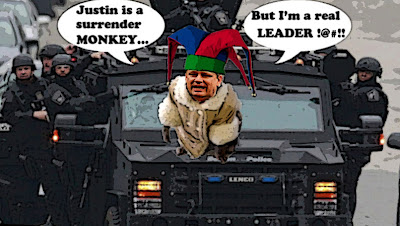 Oh no. I see Stephen Harper is still trying to politicize a tragedy.

Still trying to portray himself as a strong leader.

Still trying to portray Justin Trudeau as a girly man too weak to govern.

In a surprise move Friday, the Harper government said it will launch a two-day debate on its proposed anti-terrorism legislation starting Monday, hoping to capitalize on the controversy surrounding Mr. Trudeau’s call after the Boston Marathon bombing to fight the “root causes” of terrorism.

When in fact he's the one unfit to govern, a dangerous maniac, and a hypocrite.

For Obama himself has said we need to understand what motivates terrorists to better fight them, and avoid similar tragedies. What sane person wouldn't?

And even as Harper's pathetic flunkey Peter Van Loan diddles with the Order Paper, and proclaims that we need action, not more studies.

In order to give members of this House an opportunity to express their views on the appropriate way to respond to terrorist violence, on Monday and Tuesday the House will debate Bill S-7, the Combating Terrorism Act. This bill is at its final stage in Parliament and I call upon all members of this place to pass this bill, we don't need further study - we need action.

The Con regime is spending gazillions of our tax payer dollars on... you guessed it...all kinds of studies.

Despite his insistence that Real Leaders shouldn’t “sit around trying to rationalize” terrorist violence “or figure out its root causes,” Stephen Harper has announced a multi-year program worth millions of taxpayer dollars designed to do just that.

And Stephen Harper is starting to look like a leader too weak to control his own party.

Gawd. I don't know who came up with the idea that Stephanie Stephen Harper is a manly man. 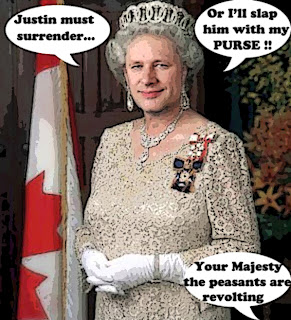 But they should be arrested for FRAUD.

And one thing is for sure eh?

In this complex and dangerous world Canada simply can't afford a leader who doesn't understand The Enemy.

Yup. Stephen Harper: NOT a leader, just a maniac.

Too dangerous to govern.

Sailing through his own stinky parallel universe.

On his way to oblivion... 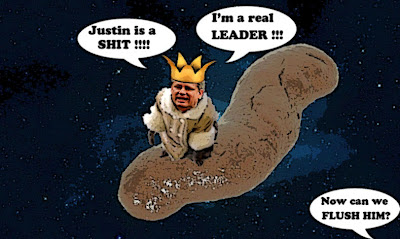 Justin spoke with common sense. Do you think the U.S. wasn't studying motive and root causes? That's the first thing they have to do, identify the enemy. They have to know, which terrorist group and the root of their cause. They do this, to figure out, if they may strike again and where their next target could be. Why do they have Profilers then? Even Police solve many of their crimes with, motive and root causes of their suspects. They too need to understand, where their suspects may strike again.

Anyway. If Harper's mouth was any bigger? He could get both of his feet in it. Seems, Harper knows just how many foreign workers, he has permitted into Canada. Not a day goes by that, Harper isn't caught in, lies, deceit, corruption and dirty tactics. How many more cheap Chinese workers, is he bringing over?

You know... I agree with you. Harper is awful, a bully, etc etc. Totally on board with this.

That just smacks of the same sort of bullying Harper's been up to.

hi anonymous...I was watching CNN and all I heard was people asking WHY? WHY? WHY? So of course Justin, and Obama were right to ask the same question. It's a matter of public safety. And yes, we must not let this incident obscure the fact that what the Cons are REALLY worried about these days is their disastrous handling of the foreign workers dossier. For that's an issue that can really hurt them...

hi anonymous...I really don't know what you are talking about. I am not making misogynistic comments. My record speaks for itself. I am merely caricaturing Harper's attempts to portray Justin Trudeau as less manly than himself. That's what that attack ad was really about, trust me I know advertising. And some people are so thick you have to explain it to them that way. My support for the cause of women is well known, if you're not aware of it then educate yourself. I have always made it clear that I would much prefer if women were running the world, and that so-called feminine values are much preferable to so-called male ones. But if you're expecting me to stop bullying Harper, then you will be disappointed, for I believe in giving bullies a taste of their own medicine. Do you wish me to apologize to the Ikea monkey next? C'mon get serious, and do something to attack Harper, instead of attacking his enemies...

The latest "spin" is not that he said "Why" it's HOW he said it. Didn't sound decisive or manly or some other lame excuse like that.

Gosh I hate these guys

In 2008 when Harper was hours away from getting his sorrow butt kicked out of the PMO by non-confidence he decided to lie through his teeth to the Canadian people about the ‘coalition with separatists.’ And with the right wing corporate owned media’s gleeful assistance, Canadians bought into that lie. And from then on Harper realized he can say the most outrageous, false, illogical, bogus, politically desperate and motivated garbage figuring Canadians are so dumb that nobody will hold him to it, like running out of a funeral on foreign soil to instead of comforting our American brothers and sisters in a time of need and offer any assistance and help we can – to instead attack another Canadian politician through the media from thousands of miles away. Harper is going to further try to make political hay off the deaths of innocents by 'debating,' suddenly, anti-terror legislation that has been on the books since 2002. How repulsive and pathetic. If the Canadian public can't see through this, they're a bigger fool than Harper.

Anyhow JT never said to 'rationalize' with terrorists, he said it's important to ask why and look for the causes, just like how Obama said that and the FBI said that, because motive is important in ANY investigation. But Cons, being the simpletons that you are, are only interested in chest beating ‘tough on crime’ rhetoric - without actually doing anything in the prevention department or having the brain matter to even know how. What Trudeau said was rather intellectual; which was to say that beyond condemning the act, which is a no-brainer, there is the ‘WHY,’ because answering that question is the best way to prevent this crap from occurring. But because this was an intellectual response by JT it was not going to resonate in any Connie boob's ball parks. Harper's Reform o' cons would eat their own young if it meant getting a vote or making somebody else look bad. What else is new with these political neanderthals? Sooner or later Canadians are going to grab HarperLand by its nuts, squeeze and ask, "Don't tell us who NOT TO VOTE FOR. Tell us why we should vote for you." And of course at that point HarperLand Reform o' cons will cut and run, like most cowardly bullies do when faced with the truth.