Joe Oliver and the Pipeline Parable 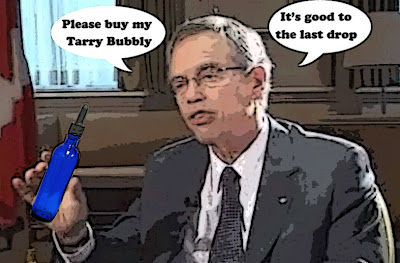 The last time I saw Joe Oliver he was still trying to sell his dirty oil pipeline.

Still trying to convince us that the water from the tailing ponds was safe enough to drink.

But since then there have been some unfortunate developments eh?

It turns out it's NOT good to the last drop.

The test results show the undiluted waste water contained arsenic, ammonia, chloride and a host of other chemicals at levels above those deemed acceptable in Alberta’s Surface Water Guidelines.

And Ollie's high octane campaign to sell his Tarry Bubbly to the Americans isn't going well either.

Not after our poor neighbours had to rename the beautiful little town of Mayflower, Bitumenville...

So now Joe is trying something new old and different. He's telling people that climate change isn't such a big problem.

“I think that people aren’t as worried as they were before about global warming of two degrees,” Oliver said in an editorial board interview with Montreal daily newspaper, La Presse. “Scientists have recently told us that our fears (on climate change) are exaggerated.”

And although he got that one from his boss at  ExxonMobil.

Tillerson blamed a public that is "illiterate" in science and maths, a "lazy" press, and advocacy groups that "manufacture fear" for energy misconceptions, in a speech at the Council on Foreign Relations.

I'm sure this new ad campaign must be all HIS idea... 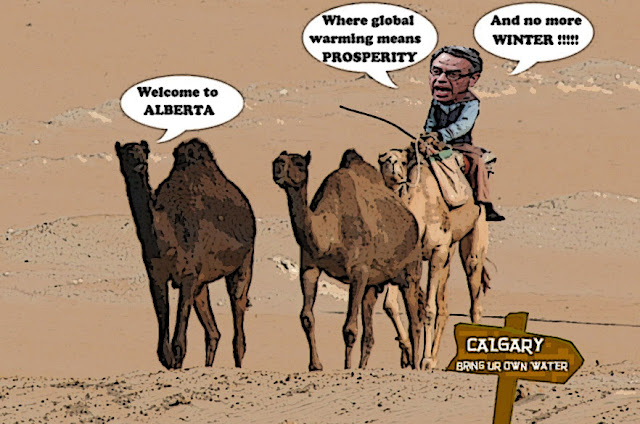 But somehow I don't think that's going to work either eh?

The oil cowboys of Alberta love their horses too much. And how much of that Tarry Bubbly can they drink, before they start growing humps themselves?

I mean seriously, Harper's oil pimps must be delusional if they think that concerns about climate change are going to stabilize, or fade away, as the planet gets hotter and hotter.

Instead of growing louder and angrier. As nations get swallowed up by the sea, farmland turns to dust, and millions starve.

Are those climate change deniers actually trying to make a comeback after being so thoroughly discredited? After fighting the very idea for years, are they now saying they do accept it, but it won't be too bad?

And is that why the Cons and their pipeline follies remind me of these three stooges?

Trying to drill a water well...

I mean it's almost a pipeline parable eh?

Thou shalt not elect Con Stooges, lest ye be condemned to suffer their FOLLY.

Or DROWN in it.

And the good news? From the Book of Simon:

When stooges and Cons go so well together. And you can laugh at both of them.

"Tillerson blamed a public that is "illiterate" in science and maths"

Wow. I wonder what kind of degree Tillerson has? I spoke to the JRP in my little hamlet last year. I am only 1 year into my science degree, and I spoke from my carpenter's heart instead, but I was preceded and followed by speakers with PhDs in biology, chemistry, forestry, medicine and engineering as well as with bachelor and masters degrees in same, some of them pursuing doctorates in their fields. These people are illiterate in science and math? The JRP in my town took 2 days. We had about 50 speakers. I know there were scientists at other venues.

Its not that we are scientifically or mathematically illiterate. It is that a "killing for some versus a living for all " computes differently depending on which side of that arrangement you happen to be on.

Oh no not this guy again. It's just an oil company scam. Make him drink it like his ilk did in the 70's and for prolonged period of time not some unsuspecting little people . The latest test shows contaminants way higher and if the. Athabaskan drainage system flows backwards which it does they all be through the roof

There were Alberta families who, had to leave their homes. The stench of the tar sands was making them sick. Alberta has also had pipe bursts. Farmers land and water poisoned. Some farmers had to move their livestock. A small cities water supply was poisoned by a pipe burst. There is tar sands pollution found, in other Alberta lakes and waterways.

In Athabasca Lake their are poisoned fish with tumors. The mighty Athabasca River has Mercury, heavy metals and cancer causing agents in it. The huge Athabasca watershed is contaminated. The Caribou and Buffalo are dying, they also are full of tumors. A F.N. peoples village, is dying of cancer. A flock of 500 birds died from landing in the dirty sludge. Cutting down the last Boreal Forests in North America, an absolute crime.

Harper is also planning China, in the rich resources of the High Arctic.

If the Keystone is approved? Premier Redford made a deal long ago......She would bring over American War Vets, to build the Keystone, on both sides of the border.

If Enbridge goes through? Petro-China will build the Enbridge, very cheaply and very quickly.

Seems to me? Harper is outsourcing the resource jobs too. Chinese resource workers earn, $800 per month.