Michael Sona and the RoboCon Scandal 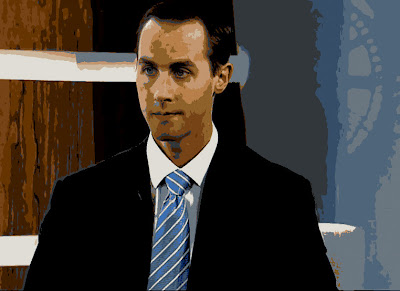 Well, it's been a long time coming.

And I have to admit I had almost given up hope that anybody would ever be charged in connection with the RoboCon Scandal.

But finally somebody has picked up the ringing phone and answered my prayers.

After 21 months of investigation, Elections Canada has charged a former Conservative campaign staffer over misleading robocalls in Guelph, Ont. in the 2011 election.

And now I can't help but think that this is just The Beginning....of the end of Stephen Harper.

Because I can't help but agree with Michael Sona's lawyer:

“I cannot help but comment, that if the government was interested in the public being fully informed and the issue of robocalls being properly addressed, a Full Public Inquiry would be called, rather than a charge laid against a single individual who held a junior position on a single campaign and who clearly lacked the resources and access to the data required to make the robocalls.

Sona has always claimed he was the fall guy.

"You've got to take a look at the options and just say, you know what, what is the more realistic option here? That some then-22-year-old guy managed to co-ordinate this entire massive scheme when he didn't even have access to the data to be able to do this, or the alternative — that this was much more co-ordinated or possibly that there were people that knew how to do this, that it was being done?"

Nobody has ever accused him of being a genius. 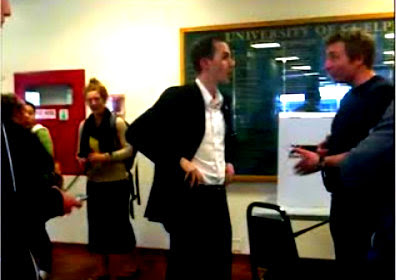 And if this is true:

While Sona didn't have access to the party's voter contact database, five other campaign workers did, according to court documents.

This sordid scandal, this outrageous assault on our democracy, has got to be bigger than just one person. And the mob at the PMO are also going to have to do some explaining eh?

Sona said the Conservative Party headquarters was closely involved in the local Guelph campaign. "We were a target seat for a while and there was a lot of direction from headquarters," he said, with people often dropping into the campaign office or offering advice.

And the BEST news of all?

This latest scandal is the LAST thing Stephen Harper needs. Not at a time when he's drowning in so many others.

Not after this chummy photo... 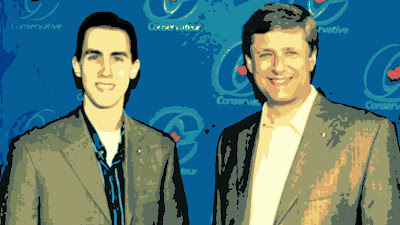 Because this court case will rekindle public interest in the RoboCon scandal, at a time when Stephen Harper's popularity is tanking. At a time when more Canadians are inclined to judge him more harshly.

And will inevitably lead more of them to ask the essential question that must be answered if our democracy is to survive:

And that could be very embarrassing eh? For as I explained last night, Great Mentor Leader did create a small army of young fanatics.

He taught them by example that winning was EVERYTHING... 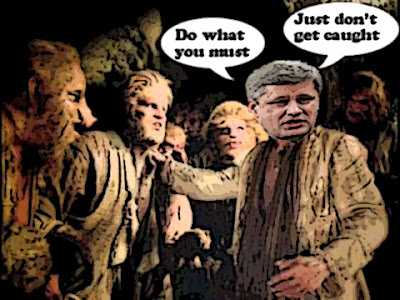 He commanded them to treat his opponents as The Enemy. As he did. He turned those young fanatics into his own little monsters.

Now one, or more of them, may be coming back to bite him. Ouch.

And he could be left, in the run-up to the next election, watching everything he built up over the years slowly unravel. Or implode.

Be forced to make some campaign calls himself... 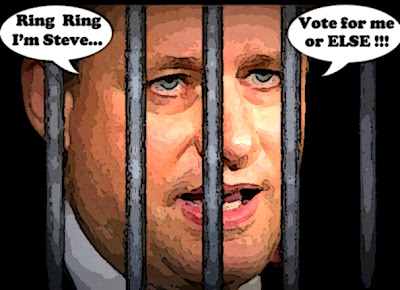 From a most uncomfortable political position.

And how do I feel about all of that?

Gawd. I don't know if I can put my feelings into words right now.

Not after reading what  Stephen Harper had to say the other day in Question Period.

Not when I'm laughing my ass off.

But I suppose I could say this, after waiting so long for this happy day to arrive.

It suddenly feels like Spring, even if it's still friggin cold eh? 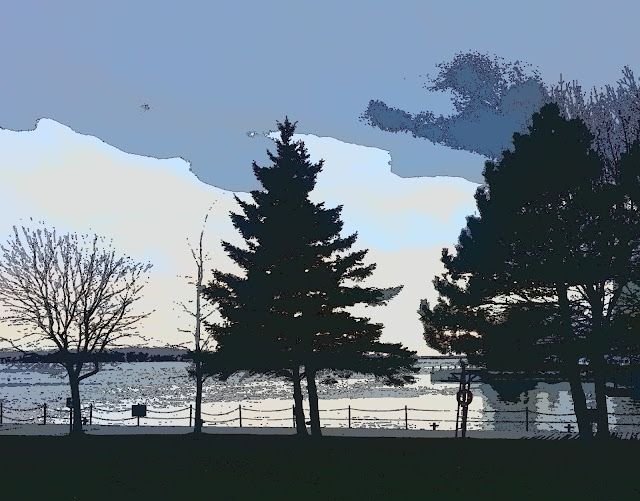 And I do have a couple of final questions.

Will the Cons start SINGING?

And do you think the Harper gang will look good in pin pen stripes?

Golly I hope so eh?

Because it should be quite a SHOW...

Most Canadians knew Harper cheated to win the election, with his robo-call fraud, right from day one. The election was, fouled, dirtied and, not even valid. Harper has no right to be the P.M. of this country, what-so-ever.

Harper has failed miserably, at absolutely everything. He should do the decent thing and resign. However? Harper is not decent. He is an old Reformer Dictator of 1989. Harper's asinine Omnibull-S-Bill should tell everyone that much. Nor do we want Harper's Communist China, setting up shop on our Canadian soil.

1. The incredible amount of corporate money backing this dictator and his whole crime-ridden cabal.
2. The absolutely unforgivable apathy of the Canadian voting public.

With those two weapons alone, adolph harper and his jackbooted lockstep "government" will probably crush the normal people in this country again. Power is the most addictive substance known to our species. Just look at what we have done and continue to do to gain and retain it. No crime too big; no atrocity beyond the imagination. The devil has caught us "asleep at the wheel" and now we are going to pay for it. It IS our own fault this happened! Sure as hell hope I'm wrong but ask me again in 2014 or, if adolph prorogues parliament again, 2015 or 2016, etc, etc etc.

You're too naive. That's it, they've found "the culprit." The investigation is now complete, and we all have to move on to bigger and better things.

This country is fucked.

hi anonymous...I also believe that the RoboCon scandal is a conspiracy carried out by more than one person. I just hope that the resources Elections Canada has at its disposal are enough to crack this case...

hi anonymous...I don't think I'm kidding myself. This time ;)
It's tyrue that they have the money and we must contend with apathy. But we are more them them, and people are tired of this government, and that always makes it easier to defeat them. Easier at least than it was before. We face a brutal struggle, and we will have to be very smart, and make some brutal choices. But in the end I am still confident we will prevail...

hi sinned34... I admit I am a guy who sometimes looks in vain for the pony in the manure. And you may be right, it could be just a token prosecution to try to satisfy the public or show us they are on the job. But the investigators have to show that they have reasonable chance of conviction for them to be allowed to proceed. And it will allow them to question others so who knows what might happen. And as I said in the post whatever happens in court will reflect badly on Harper and his gang. So cheer up the situation is still horrible, but better than it was...

The "party of accountability" has been doing everything it can to ensure that there are no voices critical of it in any of the supposed "watchdog" entities that are supposed to police and report on any wrongdoings by the government.
They wisely cut the funds to Elections Canada and chased Kevin Page from the PBO position so they could hire somebody willing to give them a free pass.
This will continue for the next two years, and Canadians won't really give a shit, just like they didn't care about the unprecedented proroguing of parliament, or any of the many indicators that the CPC would say and do anything to win a majority government.
Combine voter apathy with a conservative-compliant media, and add in the fact that the center-left to extreme-left vote is divided up between no less than three fucking political parties, and I'm certain that the CPC will win the next election as well. The only thing that might save us is a major scandal that the populace can really get pissed off about.

Why is this not in the Star or Globe?