Margaret Thatcher Even Worse Than I Remembered 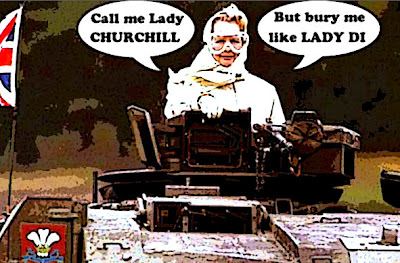 I wasn't planning to write another post about the late Margaret Thatcher.

But now that I see that the Cons in Britain are planning to give her a lavish funeral. Even though most Britons are outraged.

Crippled by savage Tory cuts, ordinary Brits are furious at forking out £10million for the funeral of a woman who shattered many of their communities all those years ago and left them a legacy of despair.

And that if you plan to protest the police want your name.

I'm starting to get the horrible feeling that my heartfelt obit didn't do her justice eh?

I really should have mentioned her appalling record in Northern Ireland.

At her worst, Margaret Thatcher was bloody-minded, incompetent, sadistic and vindictive. And nowhere was her brutishness more a menace to decency and peace than in Ireland.

Or reminded people that her decision to torpedo the aging Argentine cruiser General Belgrano for no good reason... 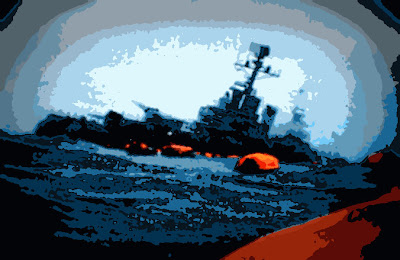 Caused the death of hundreds of young conscripts in the icy waters of the South Atlantic. And ended any chance of a peaceful resolution.

Also, although I did mention that she was a foul homophobe, I feel I fell short in my description of her ferocious bigotry.

The 1987 election saw Tory ad campaigns trying to portray Labour as actively trying to pervert children. One billboard showed a line of young men wearing badges such as "Gay pride" and "Gay sports day" with a slogan, "This is Labour's camp. Do you want to live in it?".

Or what she did to gay kids.

She denounced local education authorities for teaching children that "they have an inalienable right to be gay" and brought in the hated clause, then section, 28, which outlawed the promotion of homosexuality as "a pretend family relationship". Despite the fact that no one was ever prosecuted under it, the law made teachers feel they could not tell kids that if they were gay, it was OK. It effectively scared them from talking about being gay even when children were being physically attacked.

So now that I've hopefully improved my obit eh?

And I'll just say this:

Is that true? Harper and Mulrooney and Cambell is already there. What a disgrace !

hi anonymous... sadly it is all true. And yes,she is to the Cons from Mulroney to Harper,their precious Mummy Theresa. And so strong is this Thatcher cult, that even the gay buffoon John Baird would name his cat after her. Even though, she was a horrible anti-gay bigot. It boggles the mind. I don't know whether to laugh or barf...

hi sassy...well that just about sums up the situation in Britain these days eh? She had been dead for a long time, but her Con spawn are mutilating and privatising the NHS in such an abominable manner that even the remaining medical staff couldn't tell the difference. Under the new plan, public hospitals must reserve 49% of their beds for private patients, so you can see where this is going. You know, when I was younger, I used to be shocked by how just mentioning her name in the north of England and in Scotland, would make people's faces turn red (or redder in the case of Scotland) as they let you know how they REALLY felt about her and her legacy. In the misty highlands, where as you know passions run deep, especially after a few whiskies, it could be almost frightening. Especially since she looked like one of my grannies ;) However, when I properly understood what she had done to them, and now that the members of her cult have seized power in Canada, and I'm living in the toilet of Harperland, reeking with the stench of her legacy, I'm inclined to agree with them. Don't forget, and never forgive...

Glenda Jackson certainly isn't at a loss for words. She reminds all of us just how "wonderful" those Thatcher years were. Too bad we don't have politicians like her here in Canada.

I heard on the radio today That Cher voted to decriminalize homosexual activity in 1979 but then became an enemy to them once PM . It was on CBC . A gay guy from Brighton who grew up in the 70's thinking Magee was his mothers evil twin. That reminds me I once worked at a Botanical garden where I convinced my gay co worker that the queen mother was visiting and we had to hurry and get things done. We worked like crap until break and then started asking questions of others real enthusiastic like. Well the joke was up. I felt a little guilty he thought it was hilarious

hi e.a.f...I thought Glenda Jackson's little speech was awesome, especially since unlike the pols in our Parliament she didn't read it or use notes. And what made it even better was hearing the Cons getting more and more restless as she went along, and making loud hog sounds. What more could I ask for? More, more... ;)

hi anonymous...Yes, I hate to admit it, but Baird is gay. I tell people there's one black sheep in every family. But it's small consolation... ;)

hi anonymous 1:35....yes that's true, she did support the decriminalization of homosexuality, only to wield bigotry as a weapon when she needed it later on. Which in my book makes it even more disgusting. Also when Section 28 was finally struck down, she made a point of sitting next to some bigot in the House of Lord and Imbeciles, who was leading the charge to keep it. So yes, did I mention I was glad she's gone? ;)

I liked Glenda Jackson as Queen Elizabeth the first but I LOVE HER as a humanist basher of right wing HYPOCRITS. Just to let everyone know...much like the current bunch of living jokes that are running the oldest daughter of the empire (Canada), who are claiming to be morally superior and thus having the authority to dictate how everyone should live(or die), the NAZI party's ranks were rank with closeted homosexuals!