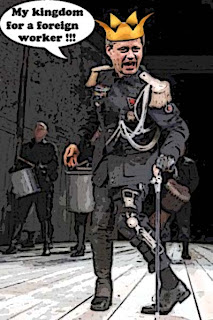 It's like a nightmare version of Richard III. Or the last act of the Con regime.

Stephen Harper limping across the stage of his corrupt and decaying government screaming like a madman:

Because if you thought the Royal Bank was the only bank to replace Canadians with foreign workers you would be wrong.


Current and former Canadian bank employees have inundated CBC News with emails, saying outsourcing practices are common among the big banks after a CBC exclusive revealed RBC is using foreign workers to replace dozens of Canadians.

And if you thought the greedy billionaire bankers, or that Chinese mine in B.C.,  were the only ones to take advantage of this disgraceful Con program you'd be even more wrong.

A list of fast-tracked temporary foreign worker applications shows that scandals at Royal Bank and HD Mining are just the tip of the iceberg.

Between April 25 and December 18, 2012, more than 2,400 ALMO guest-worker permits – which are supposed to be reserved for highly-skilled employment – have been granted to fast-food restaurants, convenience stores and gas stations. 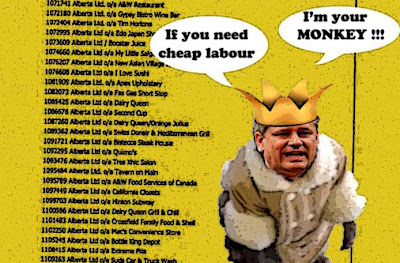 Read that list and weep. And then ask yourself why would all those Canadian companies hire so many foreign temporary workers? And the answer is, as I pointed out the other day, the sellout Cons allow them to pay those wage slaves even LESS than they pay Canadians.

Business insists that such workers are needed because skilled Canadians are unavailable. But far too often the real reason is that foreign workers are willing to work for less. The Conservative government has codified this practice by permitting Canadian employers to pay their foreign workers up to 15 per cent less than the going wage.

And this in a country where the unemployment rate is going up.

And so many unemployed Canadians are slowly dying from despair. Even as the Harper regime tries to paint them as too lazy or stupid too work. 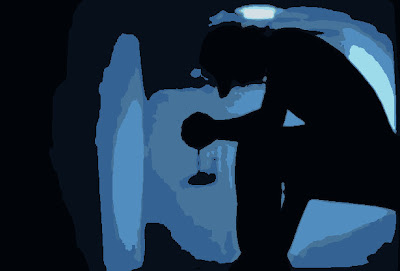 Oh those cruel bastard Cons. Those scummy traitors who would betray their own people.

This is the issue we can use to define them and finish them off.

For this is an issue EVERYONE can understand. You couldn't buy a better anvil to hang around the neck of this drowning government.

And the next time Stephen Harper and his gang of sellouts pose as nationalists, or tell us to get excited about the War of 1812, we can now laugh in their faces... 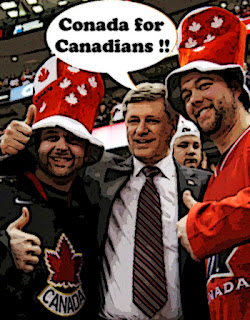 Just like I laugh when I think of all the devastating attack ads we are going to be able to make from now until the next election.

It is the winter of our discontent. 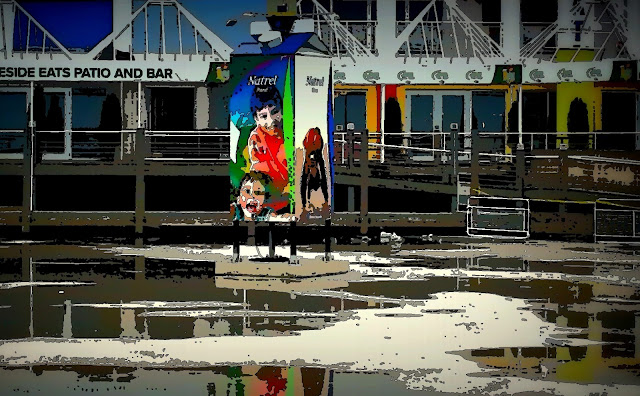 It's been so horribly long.

But now it's almost over.

King Harper has lost his crown.

His sellout Cons can't lie their way out of this one.

And we are going to destroy them... 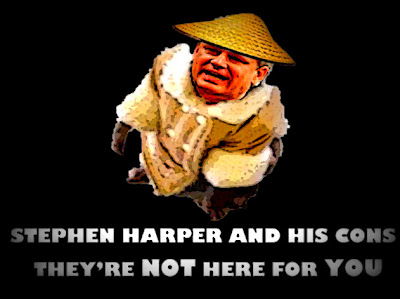 I sure hope this is hits the average member of the public like a bucket of ice cold water and wakes them up once and for all. Steve "the economist" Harper has basically screwed Canada's workers, skilled and non-skilled. One outsourcing expert said that even diagnostic lab testing is being conducted overseas thanks to the magic of our digital society.

What's the point of educating our youth in IT or lab technologies or any other skilled profession if all the jobs are being outsourced? I guess the only job sector that offers any opportunity is short term construction jobs where it might actually be more cost effective to hire locally.

Profit that's the only point. We should boycott Tim Hortons while we're at it. The capitalist ideals these money mongers pretend to espouse while our government undercuts the Canadian labour market. Labor shortage = wage increases = problem solved. Meanwhile lives destroyed ,worth ethic ruined, booze, drugs ,depression especially for the young the future looks grim. No wonder there building jails. Oh ya using outside companies using imported labor.

We're near the bottom in every category, including health and safety, bullying, etc. The growing gap between rich and poor and lack of political will to address these issues are at the root of it all.

I don't know Simon. Harper has no decency, ethics nor morals. Those are very, very dangerous traits of character.

Is there one country in this world that doesn't see? Canada has become rotten to the core with corruption? Especially since Harper's so called election win. Harper said. I am the law. I make the rules. Harper doesn't govern, he dictates.

The only Economic Plan I see is, China in the tar sands. Harper planning China, in the rich resources of the High Arctic. China in our mines too.

Harper's Job Action Plan is for cheap foreign labor. China sued in BC, to take the BC mining jobs. 300 BC miners applied for, the 200 mine jobs, Harper gave to China.

Canada's name is mud, to most decent countries in the world. Harper is banned from most World Organizations. At meetings of the Nations, Harper is the trouble maker every time. He always manages to, insult and anger every country present. Those countries detest Harper's bullying and his hissy fits, when he doesn't get his own way. What other country doesn't know? It was another P.M. who, saved our Canadian bacon?

And then there is this, if you weren't already convinced how repulsive this Con weasel is - from the TorStar on April 27: "(Jason) Kenney has warned that unemployed workers who refuse to take low-wage jobs will have their EI benefits cut off. If Canadians agree to work for less, he explains, Ottawa won’t have to bring in as many low-wage outsiders." So it is obvious what is happening here. Harper hates unionized labour, number one, but this 15% less pay he allows for foreign workers coupled with the new E.I. conditions is not only a disgrace and disgusting and yes TRAITOROUS, but it is a massive blow to a healthy, vibrant middle class and as such also to the overall Canadian economy. Both Harper and that ridiculous greasy fuck-weasel Kenney are enemies of Canada.

hi Beijing...I also hopes it wakes Canadians up, because we're being treated like second-class citizens in our own country. And we need a real CANADIAN government to stand up for us. All that is being left for young people are service jobs where the pay is lousy, the hours are minimal, and you have no benefits at all. Roughly one-third of my friends are unemployed, another third are underemployed, and although I'm lucky to have a decent job, who knows when some foreign worker might be brought in to work for even less than I make?
The answer is simple: train younger and older workers for the jobs of tomorrow, like many other countries do. But our business class is too lazy and cheap to do that, and the Cons couldn't care less about workers, unless they work for Big Oil and in Alberta. If our opposition parties can't run with this one, they should disband because they are totally useless...

hi anonymous...Yup. It's only about profit, and the Cons are encouraging those money mongers because they want to bust unions and turn Canada into a low wage economy. In any other country people would be storming Parliament and demanding that those traitors be put on trial. And yes we should boycott every company that brings in foreign workers, until they can put a certificate in their windows THIS BUSINESS HIRES CANADIAN WORKERS. Because enough is enough...

hi REV...yes I saw that story and intend to include it in my next post. I've fought for the rights of children and against the bullies for YEARS, and I too am disgusted. Those ghastly Cons really are the bottom of the barrel...

hi anonymous...yes the Cons have no decency, and why should we be surprised when a fish rots from the head down? Beyond the all the individual atrocities, the one thing I can NEVER forgive them for is making me ashamed to be a Canadian. I won't stand for it. And it only makes me MORE determined to defeat those scummy bastards in the next election...

hi Wazz...you're absolutely right, the Con plan couldn't be more obvious. How dare that hog Kenney treat Canadians like slaves? Who do they think they are? Gawd. But as you know I'm always looking for the pony in the mountain of manure, and the good news is that we now have a really visceral issue to hammer the Cons on the head. And la Kenney is going down too...