Benjamin Netanyahu and the Stooge Harper 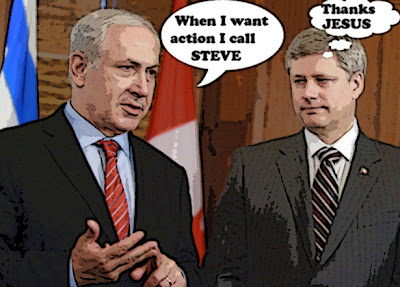 Well at least now we know who is the architect of Canada's Middle East policy, the Israeli right-wing blowhard Benjamin "Bibi" Netanyahu.

At the request of Prime Minister Benjamin Netanyahu, Canadian Prime Minister Stephen Harper thwarted an announcement Friday by the G-8 countries that would have supported U.S. President Barack Obama's statement that talks between the Palestinians and Israel should be based on the 1967 borders with exchanges of territory.

Great eh? Obama launches a new initiative to try to get the peace talks going again. Then Netanyahu comes to the U.S., publicly humiliates Obama, gets 39 standing ovations from the tea bagger Congress, and then calls his little stooge Harper to put the final spoke in the wheel.

The senior government official said Netanyahu told Harper that mentioning the issue of the 1967 borders in the statement, without mentioning the other issues, such as Israel as a Jewish state or opposition to the return of Palestinian refugees to Israel, will be detrimental to Israeli interests and a reward to the Palestinians.

And why is Harper doing this? Not because he gives a damn about the Israeli people. But because his rabid Christianist base believes you can't touch the borders of the Jewish state before the Battle of Gog and Magog... 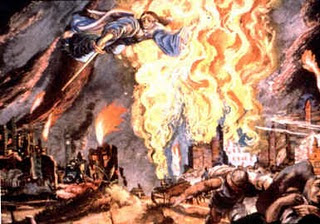 Or their Messiah won't return to scoop them up.

Even though the hairy desert dweller who wrote that deranged gibberish would be confined to a mental hospital today. And restricted to posting comments to Free Dominion.

Even though as Jeffrey Goldberg points out, the more time passes without an agreement, the more the Jewish state is truly endangered, and could one day be forced to make a truly existential choice.

Either the Jews of Israel would grant the Palestinians the vote, at which point their country would lose its Jewish majority and its identity as a refuge for the Jewish people, or it would deny them the vote, and become an apartheid state. The latter option is untenable, of course: Many Jewish Israelis would be repulsed by this thought; other nations that already consider Israel a pariah would now have just cause; and Israel would lose its last remaining friend, the U.S., because no American -- including and especially young American Jews -- would identify with a country reminiscent of pre-Mandela South Africa.

Oh boy. To think we were once considered an honest broker in the Middle East. Now we're the pariah nation of the developed world.

If you thought the Cons could only destroy Canada you were wrong. Now they're after the planet. Because now they can do anything they want.

And it's all our fault. We released those monsters on an unsuspecting world.

Yup. Ladies and gentlemen, my fellow hosers, and other idiots.

And dance to the beat of our new Israeli overlord....

Once we were a proud people who marched to the sound of their own drum.

Now we dance to the crazed drum beat of warmongers and religious fanatics.

I don't know how those ghastly Cons could embarrass us any further in the eyes of the world.

But knowing them as I do. 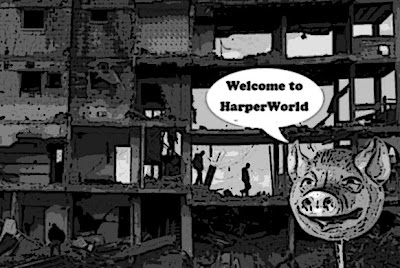 Oh boy. To think we were once considered an honest broker in the Middle East. Now we're the pariah nation of the developed world.

You said it plainly in two sentences, MS. Just two weeks into his majority government and harper reveals his minority standing in a rational world . . . .

Bibi will kindly remember Stephen's actions; Bibi will pat Stephen on the head.

Obama will remember Harper's actions; Harper may want something from Obama; Obama may be less inclined to give it.

Last time I checked, Canadians did a lot more trading and travel with the Americans than with the Israelis.

Ah, finally, I understand this story. News articles about it today were so focused on their use of the word "thwarted" that I couldn't figure out what the hell was going on. You'd think journos would be over the pride of using a "big" word by now.

hi West End Bob...thanks...for once I had to be brief. I don't have the energy for anything else. ;)
Seriously though...I know a lot of Canadians don't care about our international reputation. But I do.
I was very proud of this country once, but not anymore.
And as you point out, this comes just TWO weeks into his majority, so the future looks embarrassing...

hi Skinny Dipper...that's a good point. But you know Obama really should have known who Stephen Harper really was, just another RepubliCon. But over the years he did nothing to help our side win, but instead made it sound like him and Steve were friends. Oh well if Obama gets re-elected I'm hoping he can finally let our dictator know what he thinks of him... :)

hi Kev...yes the whole thing makes no sense, it's bad for both sides, and only good for Netanyahu's re-election prospects. And even then... I saw a poll where most Israelis supported Obama's initiative.
I have no axe to grind in this conflict. I just want the best for the ordinary people of both sides.
But I know stalling when I see it, and Stephen Harper should be ashamed of himself...

hi prin...actually if you say th..th..th..thwarted it sounds better than it looks ;)
But yes, our useless media: small minds and big words.
As for me... when I saw the word in question, for a moment I thought they were saying that Stephen Harper had farted at the G8meeting. Which when you think about it, would really have been more accurate... :)