Tony Clement and the Chainsaw Massacre 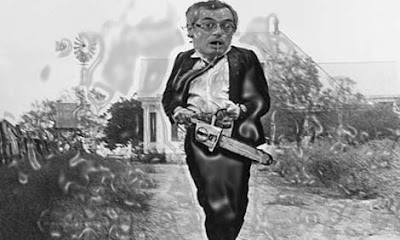 Only Stephen Harper's tormented mind could have conjured up such a ghastly apparition. The sight of the bumbling idiot Tony Clement coming after us with a humming chainsaw.

Mr. Clement says there will be no backing down...“Yeah, there are going to be reductions,” he said. “I don’t want to sugarcoat that.

The same Tony Clement who spent the last two years acting as the Sugar Daddy of the Muskokas.

The 32 projects that received funding, many of which appear to have no connection to the needs of the G8 summit, were chosen by Industry Minister Tony Clement, the mayor of Huntsville, and the general manager of Deerhurst Resort.

And Great Builder of Gazebos, in the middle of nowhere his riding... 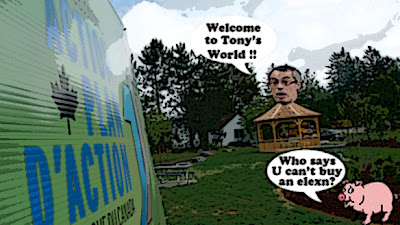 But then that's Stephen Harper eh? How better could he show his complete contempt for democracy?

And that's the Con plan. Right out of the Republican manual. First you waste billions on gazebos, prisons and fancy jet planes. Then you cut the GST and corporate taxes and starve the government of money.

Then when the deficit balloons, you say we can't afford government, and chainsaw it to the bloody bone. Which is what the Cons wanted to do in the first place. So they can turn this country into a jungle, and turn us all into slaves of Big Business.

And the scary thing is that Tony Clement is just the man to wield that chainsaw. Because behind that nerdy tweety exterior is a callous ideological fanatic... 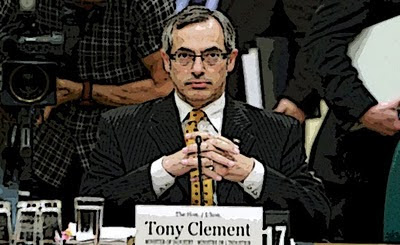 The man who led the charge to close down the Insite clinic in Vancouver. Even though it saves lives. The man who killed the census with an argument only a fanatic, or an idiot, or a liar could make.

A heartless, shameless Con who will do ANYTHING to please his deranged leader.

In Britain the Cons are going after the disabled. In the United States they are going after seniors and medicare. In this country they will go after everyone and EVERYTHING.

Oh boy. Prepare to take to the streets to defend the Canada you believe in.

The Cons and Big Business are preparing a chainsaw massacre.

And the nightmare is just beginning... 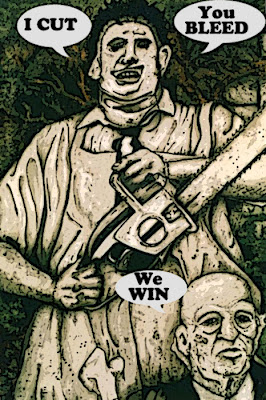 Since the cons won the election, I feel that I know what it must have been like living in 1935 Germany. You know something really bad is going to happen, you just don't know what yet.

I'm so glad you're around and writing, Montreal Simon. We need voices like yours! Raging mad as you may sometimes be, it's the only decent response to Con madness.

hi Rick...I know how you feel. I've been comparing it to the phony war in 1939...before the Battle of Britain began.
If Stephen Harper can resist the pull of the full moon he probably won't do anything too bestial this summer. But come the fall, lock your doors, and hang garlic in the windows... ;)

hi tipothecap... Thanks for the compliment. It is a compliment isn't it? ;)
Seriously though...I long ago realized that I can't hope to change anybody's mind. But since silence is consent, I thought I have to make it absolutely clear that I will never consent to a government as thuggish and un-Canadian as the Harper Cons. I realize my style can be a little mad, but you have to fight fire with fire. And I'm pretty sure history will absolve me... :)

As John Lennon stated, "Karma's gonna getcha...". Tony has been a bad actor since before he was elected. We are from Parry Sound, in Tony's mind, the ugly stepchild to Muskoka. Muskoka received millions in funding for wireless internet. Parry Sound did not receive one dime. Our plan asked for $1.2M to generate many jobs and over $3.5M/yr in business all across Parry Sound District with 100% access to all residents and businesses. Tony's Industry Canada took more than six months after the deadline to inform us that our bid was "incomplete" which means they did not understand it... or Tony put the kibosh on it. Yet we have built 100's of square miles of wireless internet stations around Parry Sound at our own expense to show it could be done. Tony may be evil, but is he also stupid? Or just corrupt. We got so frustrated we started asking our clients to email him about support for our Parry Sound-based company and he told them to wait for Bell. That was almost five years ago... guess what, they are still waiting! Dump this loser! He is an embarassment to Parry Sound and soon to Muskoka despite his alleged bribery attempts. Our town did receive matching grants for unnecessary construction on his watch and now our Town is in virtual bankruptcy. Please resign Tony, because nobody is better than you - literally!