The Cons and the Corruption of Canada 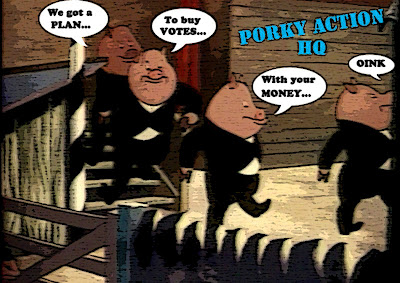 A government that wants to jail thousands of young Canadians for the "crime" of  smoking marijuana. While giving the fraudsters and the fat cats of Big Business a permanent get out of jail card. 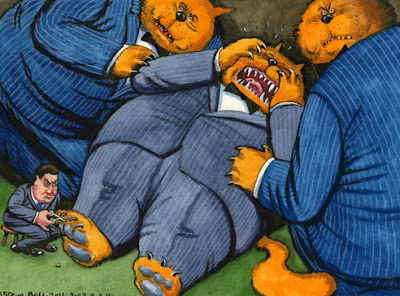 Throw in our pathetic corporate media, and reporters too lazy to give important stories the attention they deserve.

Much wonderment has been expressed recently on why stories of abuse of power don’t seem to hurt Stephen Harper’s government. The stories don’t stick, it is said. The reason may well be, to cite Mr. Thomson’s cautionary words, because we in the media don’t stick to them. It’s episodic journalism. We report one story, then move on. We don’t probe deeply. If a Watergate was happening, the public would never know it.

In the last week of the campaign, there was a seeming attempt by a Conservative operative to present Michael Ignatieff as an Iraq war planner. One can imagine what would happen if this kind of thing, straight out of Nixonland, happened in a U.S. campaign. The media would blow the roof off. Here, the story passed in a day or two without further comment.

Add to this mix a smug population that shrugs its shoulders at stories of political abuse. And the millions of Canadians too ignorant or lazy to vote.

And is anybody really surprised that along with our Dirty Oil, and our killer asbestos, we're exporting corruption?

For the seventh year in a row, Transparency International ranked Canada as having "little or no enforcement" of foreign bribery standards set out in the Organization for Economic Co-operation and Development Anti-Bribery Convention, which was signed by Canada and came into effect in 1999.

Great eh? Once we were the decent Boy Scouts and the peacemakers of the world. Now we're the planet burners, the bad guys on human rights, AND the greasy gangsters.

Oh boy. How low have we fallen. 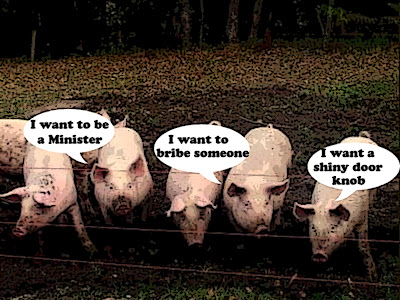 The good news? Many Canadians may not give a damn about democracy. So calling the Cons the Contempt Party is just a waste of time.

But since the Auditor General's report on the G8/G20 is sure to make the Cons look bad. And several of their senior members are facing charges of electoral fraud.

Calling the Cons the Corruption Party might be a great way to start the next four years.

It seems to me a natural fit eh? 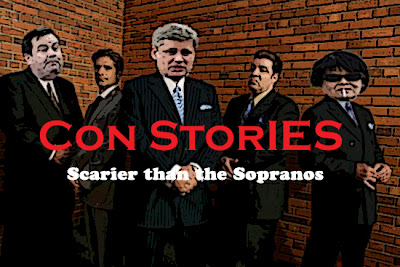 "Many Canadians may not give a damn about democracy. So calling the Cons the Contempt Party is just a waste of time"

I too have been frustrated by this. The root of the problem? Democracy has been replaced by "Capitolmocracy"-the economy and consumption is all that matters to most. Harper scored here (falliciously). Its also his biggest achilles heel.

hi Rick...personally I believe that nothing is worse than the contempt Stephen Harper has shown for our parliamentary democracy. It will be his most disgraceful legacy. But for the reasons you mention, I recognize that many Canadians don't feel the same way. So I am quite willing to call him and his Cons something else. If democracy doesn't move the masses maybe corruption will...

In Canada pre-election campaign advertisement spending is unregulated.
The removal of public political financing will only lead to greater
political favoritism and corruption of the public trust.


I bring to your attention the well documented findings of
Corruption and democracy: Political finances - conflicts of interest - lobbying - justice (2008)


The effects of unregulated political financing is summarized on page 34.

- they exacerbate political inequality. The principle of "one person, one vote" is compromised by unequal influence bought through
contributions. Financial contributions create an uneven playing field where big money (often coming from the corporate sector) has an undue advantage. Interested money may override equal voting rights and equal access to decision makers and elected office;

- political money may buy access to office and access to decision
makers. Those in a position to contribute have a greater chance to be heard by political decision makers. And those able to finance
political parties and electoral "pre-election" campaigns have bigger chance to secure places on election lists of established by political
parties;

- elections may represent less a competition of political positions
and ideas and more the ability of political parties and candidates to
raise funds, leading to an arms or propaganda race disconnected from
political debate;

- political parties and politicians risk being co-opted to represent and pursue particular interests rather than the common public interest. They are more accountable to those who pay than to their constituency. This risk is particularly great if parties rely on a small number of donors only. Parties relying on private funding may have a weaker connection to their voters and are less connected to party members. Party leaders may transform contributions into political capital to secure control over their party;

- unregulated political finances are not transparent. It is thus
impossible for voters to determine whose interests politicians are
representing, and to hold them accountable.