My First Thoughts on a Conservative Majority 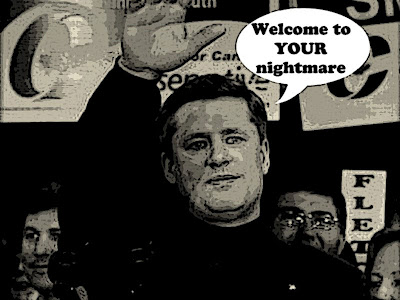 One moment I was driving through Canada.

And it was a beautiful Spring day.

And I stopped to have a drink with a buddy.

And the next moment I realized.

I wasn't in Canada anymore...

But I'm sure it's just a nightmare and I'll wake up soon eh?

I've never been prouder to be a Quebecer. I LOVE that orange wave.

And I'm not going to play the hysterical blame game like so many others are tonight.

Because trust me...out of this catastrophe will eventually emerge something GREAT. Like a united left that can properly represent the views of most of the citizens of this country.

I'll be back with another hopefully rational comment. As soon as I pack my suitcase.

I was planning to wear my favourite t-shirt tonight. 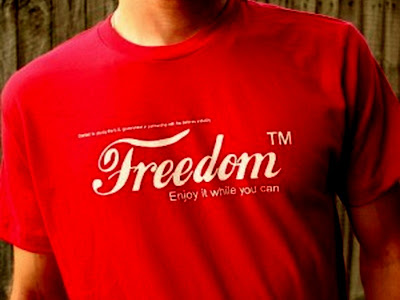 I am so sorry Simon. Come back to Montreal. Whatever the feds stop doing, Quebec will take over (starting with the long gun registry, I would bet). And when the polity here realizes Harper just wants to give Quebecers the shaft, we will separate, I suppose.

This is exactly what Harper and Preston Manning have been working towards since the Reform Party; polarize Canadian politics into two extremes: ultra-right wing and a Democratic Socialist party with nothing, in this case the Liberals, left in the middle. Harper’s hatred of the LPoC is legendary and he set out to destroy it years ago and today he finally succeeded. Now, we have unapologetic corporatists (read, fascists) in full, majority control in the House of Commons, a Senate packed with Harper sycophants, and he’s now got an opportunity to completely turn over the Supreme Court with right wing appointments as the current justices retire. And Layton’s 103 seat opposition, even with the Libs, Bloc, and Green MP on board won’t be able to do thing one to stop him. No non-confidence votes, nothing. We’ve just seen 164 malevolent, very disciplined cats swallow the whole, fucking canary farm. And with the 2012 provincial election coming up in Ontario and McGuinty’s brand sliding, we’ll get an even more rabid Harris/Harper clone in Tim Hudak.

Harper plans to establish a “Ministry of Religious Freedom”; just WTF is that??? If I, as an atheist now in a country where extremist right wing evangelicals are sure to demand religion be given more power and influence in daily life, criticize religion do I do so under peril of arrest for a “hate crime” or even blasphemy? Does internet access get restricted or even prohibited for its content? Will we see more G20 debacles as people begin to see the real outcome of tonight’s horror show and dare protest? Do gays, lesbians and transgendereds get prosecuted, imprisoned or worse by a socially conservative agenda? The same for those of us who befriend them? Look at Uganda and its policies inspired and developed by American fundie church leaders.

In all my years here in Canada and as a Canadian I never felt fearful or threatened by my country or government, but that ended tonight, and for the first time I am truly and genuinely afraid.

I remember telling my family and friends years ago when Bush came to power that if anything similar happened in Canada I would seriously consider leaving, Well tonight that nightmare came true. Perhaps I should start looking into asking for political refugee status in New Zealand...

I am so sorry. I was going through the blogs on "progressive bloggers" and when I saw your post, I could only think how much worse these bigots' victory must be for you.

They are truly dangerous and we just gave them everything.

Hi Simon,
Just wanted to stop by and say hi.

I wonder, Do the majority of people who voted for SH have any idea just how extreme he is?

Will they realize what they've done when the health care system is turned over to US Health insurance companies?

More prisons, more weapons, more machismo bullshit and nationalism, more violence against the vulnerable and women and anyone who is "different" and the sale and defunding of every institution that linked the people of this country.

Quebec will be all that is left of the "old" Canada.

This is not the Country I thought it was.

Jesus Fucking Christ. A fucking Harper majority. How long before they jail us in the new private prisons for taking the Fucking Lord's name in vain.


This government is not a Canadian government; even Harper said so when he sent a missive stating that it is now the Harper Government and no longer the Government of Canada, and this while he had a minority government.


How could the Canadian people have been so completely apathetic, stupid, ignorant, lazy, and any other adjective for useless you can think of?


There is absolutely nothing stopping Harper from doing exactly what his Reform party members wants him to do. Absolutely nothing. You, the Canadian voters, just gave a dictator carte blanche to make us American Republicans, based on right wing Christian ideology, with all of their failed policies.


For the first time in my life, I am embarrassed to be Canadian. I remember laughing at Americans when they voted for Bush (W) for the second time, and saying how Canadians would never do such a stupid thing. I am no longer laughing.


On Monday, May 2, the Canadian people gathered around the great bell, and collectively pulled the rope which sounded the death toll for democracy.


May the great wheel of destiny crush you while implacably rolling on, and not even stop to notice or care.

hi Scott...yes I do miss Montreal, I've never been so proud to be a Quebecer. And it's good to know that Quebec will NEVER go Con, and if they insist we have the ultimate lifeboat... :)

hi Neil...excellent comment and I agree with everything you say. However I believe that the polarization of our politics is due to the insidious Americanization of our country. And in that respect I am encouraged, because thanks to the rise of the NDP more Canadians will finally recognize that what we are facing is an ideological war. One that will force them to take sides and create a far clearer option. Out of catastrophe comes real change, and we can make it work for us. It will be a hard four years, but I'm ready for a good fight, with 60 per cent of the population behind us we can destabilize the Con Regime, and when the next battle comes we will destroy them...

hi Thwap...thank you for thinking about me. And yes I do feel a little bit more threatened living in a country run by bigots. But they don't scare me eh? I've been fighting them since I was thirteen,
and another four years will be like water off a duck's back. I'm keeping my RESIST poster handy, and I'm ready to do battle... :)

hi Stewart...very good questions and I'm not sure I can answer them. I have to believe that many Canadians who voted for Harper didn't know what they were doing. This is a beautiful country, but prosperity has made many people democratically lazy, as you can see by a turnout rate of only sixty percent.
If Stephen Harper tries to implement his hidden agenda I'm quite sure it will wake them up. So I remain optimistic about the future. Just even more impatient than ever... :)

hi Sassy...funny you should say that because I was just thinking the same thing.
On the other hand I'm so sorry Bruce isn't here, because I'm sure he would have had some choice things to say, and I'm sure we both would have loved them. Even if our ears turned blue... ;)

hi Beijing...well let's put it this way. If you choose to take Mamoona's name in vain in Harperland be sure to keep a toothbrush in your pocket.:)
Seriously though...did you see the look on Harper's face when at the end of his victory speech he said the word God twice? It was like a small boy who thinks he can now say a rude word and get away with it.
But he won't, because the more he reveals himself, the better it will be for us. It may be a marathon instead of a sprint *groan* but in the end we WILL win...

hi prin...yes it is a sad day. But I didn't shed any tears. The NDP rise gave me hope for a better future. And besides there was too much smoke pouring out of my ears... :)

How could the Canadian people have been so completely apathetic, stupid, ignorant, lazy, and any other adjective for useless you can think of?

Why you ask me questions I can't answer? ;)

This morning I was speaking to an old American friend, and he reminded me that when I was at McGill I was always predicting that fascism would come to the United States. And how come I never mentioned it would come to Canada first?

So what did I say?

Why you ask me questions I can't answer?

Why I do know is that I intend to fight even harder to get my country back...

When will he start eating babies? Wow, you are deranged...

hi anonymous...no...no...you're wrong. I don't think I have ever accused Harper of eating babies. But now that you bring it up, he is deranged, so I suppose ANYTHING is possible... ;)