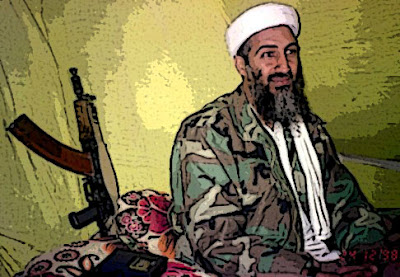 For most of his miserable life he had as much relevance to the terrorist movement as Colonel Sanders had to Kentucky Fried Chicken in his declining years.

Al Qaeda is a franchise and he was just its figurehead. Ayman Al-Zawahiri was and is its real leader. And the 911 attack was planned in a mosque in Hamburg, Germany. Not in his air-conditioned tent in Afghanistan.

He was always a coward. The spoiled son of a rich Saudi family, who lived in a mansion protected by the Pakistani military, and nibbled on grapes, while his minions sent poor barefooted boys to their deaths as suicide bombers.

But as the CBC's Neil MacDonald points out the devil likely died happy.

When bin Laden directed those airplanes at civilians ten years ago, he stole a lot more from this nation than the lives of 3,000 of her citizens.

He taught this country the consequences of operating an open, free society. Literally, he showed Americans the price of their liberty, how many of their principles they'd be willing to cast aside, and how quickly they would do it.

Americans surrendered to ever more intrusive searches and probes at airports, carried out largely to create the illusion they were being protected.

The cleavage between right and left, red and blue, urban and rural, became deeper than at any time in modern history.

But it was the loss of America’s liberties, the sacrifice of individual freedom, and the breakdown of its rule of law that was bin Laden’s greatest triumph.

Because the greatest damage to America was done by the Americans themselves. And their fear and loathing and paranoia drove us ALL insane.

The best story I ever read about bin Laden was written by the grand old BBC reporter John Simpson, who bumped into him in a mujahideen camp during the Afghan war against the Soviets.

When bin Laden saw him, he tried to get the fighters to kill the "infidel." And offered them large sums of money if they did. But they refused because it was against their Afghan hospitality code.

So bin Laden went to his tent, stretched out face down on his cot, and wept and wailed and pounded his pillow in frustration.

Yup. He was always a coward and a poseur. He inspired the deaths of thousands of innocent people, while remaining at a safe distance. Two bullets in the head was really too kind. I wish they could have taken him alive, so his myth could have been exploded.

Oh well. The good news? He's gone to feed the fishes, so we don't have to watch his boring videos, or listen to his empty threats.  And now we know for SURE that Pakistan IS the terrorist conspiracy. As if any reasonable person, who can spell Pakistan AND find it on a map, hasn't known that for YEARS.

And the best news? The deranged American birthers and teabaggers are the ones sobbing and pounding their pillows today. After the black "Muslim" President accomplished what their hero George Bush and his war criminals failed to do.

Remember to curse the devil's name eh? The next time they ask you to take off your shoes. Or read your e-mails.

Raise your right elbow to the Great War on Terror. Or else.

God damn them all.

I just had a horrible thought. What if we held an election and nobody came? Because they were all watching the bin Laden story.

OMG.Turn off your TVs eh? And go VOTE.

In the grand scheme of things, he just wasn't that important...

Given their billions of dollars in support for Saudi Arabia and Pakistan, the USA is a part of its own terrorist conspiracy.

I'm sure the repugs and tea-baggers have already got half-a-dozen conspiracy theories about how this is all a fraud.

The whole thing is insane and their whole political culture is a lie.

hi thwap...thanks for reminding me about the other half of the terrorist conspiracy, Saudi Arabia.
The Pakistanis provide the suicide bombers, the Saudis pay for them.
And of course, as you point out, the U.S. pays them both to bomb them. It is a crazy world...

hi Willy...thanks I'm glad you liked it. After finishing it I regretted writing about it on Canada's election day. But the bin Laden coverage on TV is worse than the Royal Wedding, all that flag waving and cheering is making me ill, so I just had to say something...