Are the Cons Trying to Steal the Election? 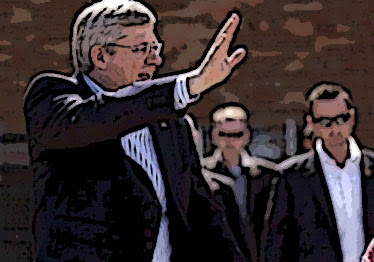 Golly. For a moment I thought that Great Ugly Leader had forgotten himself. And was trying out his Thousand Year Majority salute. Before the votes were even counted.

Yikes. Doesn't he even know the election rules? Has he NO respect for democracy?

Or does he know something I don't know?

The federal agency has received reports from ridings across Canada of people calling voters to give false information about polling locations or other changes in voting polls.

Are the Cons trying to steal the election? You don't think they might be trying to suppress the vote eh? Surely NOT.

Oh well. I just did my part to start correcting the systemic problem. I just voted for the good guys. Or the good woman.

Everybody should vote eh?

And keep your eyes open for Con operatives, the ones with the flinty eyes who smell of corruption.

Here's the plan. First we defeat them

And then we arrest them...

Stevie will stop at nothing. Nothing surprises me anymore.

Even that faux panic over the NPD 'surge' is nothing short than theatrics and not even Oscar worthy. I saw righ thru it.

pretty disgusting - right out of the republication playbook!

More than likely it's the work of a few morons or pranksters with no endorsement from any political party. No national political party would be stupid enough to try this in Canada. It's too easily tracked back to the source.


I hope the bums get a huge fine and jail time. (Maybe they can test all those shiny new prison cells that the Cons want to build).

He also broke election rules and campaigned on the radio today.

hi ck...I have always believed that Stephen Harper would do ANYTHING for a majority. And now he can almost smell one, so everyone should watch out.

As for the NDP faux panic...did I tell you my own conspiracy theory?
They've taken Osama bin Laden's body to Area 51...and they're keeping it in a freezer right next to the alien... ;)

hi jan...it does sound like something RepubliCons would do. Because who else stands to gain from suppressing the vote....

hi Cycles...maybe you're right, but it's happening in different places with the same modus operandi,so I'm suspicious. Besides as you may know, I never give the Harper Cons the benefit of the doubt. After all they've done to this country, when something dirty happens, they're the first people I suspect... ;)

hi paladiea...yes thank you. I added that story after you wrote the comment. And the one about how seniors were being deprived of voting. It may be a conspiracy, it may be just incompetence, but it's mighty disturbing...

given that the the tories stand on the brink of a majority (at 7:30 pm pst), my heart bleeds for you. really it does.

hi Backseat Blogger...How did I know you'd be dropping by to gloat? But don't worry, I thrive under difficult conditions. It brings out the worst in me. And after Harper finishes wrecking Canada, and the left unites, the Cons won't be back for the next fifty years. Which you must admit is something to look forward to eh?
Besides as I told you before, you're gay, I'm gay, so I'll see you in prison. And I must warn you I like to be serviced regularly... ;)