Freddie Mercury and the Idiot Principal 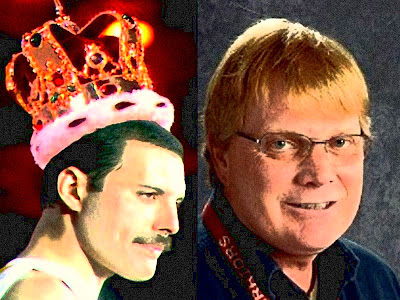 Most of the time homophobia is a disease that kills, or maims, or makes millions of people miserable.

But sometimes it's just idiot.

Probasco explained it was because he'd received a complaint from a parent. You see Freddie Mercury, the vocalist who had sung the original version of the song, was gay.

"I felt like the school was discriminating for sexual orientation and I felt it was wrong," Hight said Monday. "It's so stupid because there's nothing sexual in the song. There aren't even any cuss words.

And how fortunate that the Principal changed his mind. Sort of.

Let it not be said, however, that Principal Probasco is an unreasonable man. After much consideration, he decided to put the song back into the program! However, it will be an edited version of the song that omits "lyrics in one section about killing a man."

Because you know at Wasilla High preventing violence is a pressing concern... 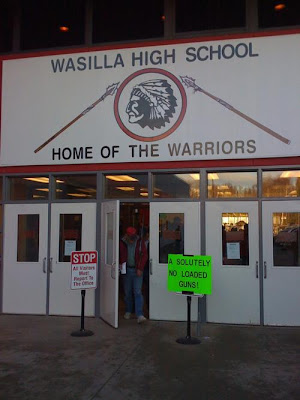 And if he banned Freddie for being gay, who would be next I wonder? Cole Porter, Aaron Copland, or Peter Tchaikovsky?

Yes indeed. As I said before.

The kids are alright.

The Principal is an idiot. Who looks like Elton John.

And he was FABULOUS...

And he was even more absolutely fabulous in Montreal in 1981!

"Because you know at Wasilla High preventing violence is a pressing concern... "

Just a little FYI here AZ is a Shall Issue Concealed Carry State. This means a person can legally carry a concealed firearm with the proper state permit.

Persons possessing a concealed handgun permit are prohibited from carrying their firearm into any school, college, community college, or university campus building or event in the state of AZ. It is fairly common to see such signs outside of some businesses also.

I am not sure what you goal was maybe humor or irony, but simple reality is it was a simple reminder to those coming on campus that if they had a firearm to go back and secure it in there car.

Oh and how do those 4 rural seats that have helped the Conservatives gain a majority all lost because of C-391 and the Turf Mark Holland fund which firearms owners from all across Canada funded to the tune of $15,000+ all because of his efforts to kill C-391. Maybe they should have let it go huh.

hi theo...yes he was wasn't he? I love everything about him, from his voice to the wonderful way he could dominate a stage.
His death was such a sad story, but his songs will live FOREVER...

hi Omar...OMG. I've never seen that one. Although I knew that Queen was huge in Montreal. And yes Freddy was very fabulous and very gay... :)

hi Paul...please...I was just kidding around. All I know about Wasilla is that if I ever went there I'd be sure to wear a bright orange jacket, and a bullet proof vest.
Besides why are you so grumpy? You won. Soon the registry will be dead, and there will be so many guns on the street, I'll have to buy one too just to protect myself.
If I'm not a bad loser, why can't you be a good winner? ;)

I'm grumpy because I didn't win. Small little v victories do not make for the big V Victory. I had to lose to win for many reasons.

The small victories are not having a coalition government that needs the support of a separatist party and the gun registry. I will believe the fiscal conservationism when I see it. I don't trust the conservatives we don't know yet if they are big C or little c.

The best arrangement was the one we had were the parties had to work together or at least bend. Now we have 4 years of majority rule and I blame to a great degree the Liberal arrogance around gun control. They actively chose to alienate over 4 Million voting age citizens when they created C-68 15+ years ago and then stick a thumb in the eye of there rural caucus on C-391. All while guys like you pushed them to do it.

I just hope the Liberal party gets its shit together and does a policy review to put themselves back in the center and throw out the ideas that have made them a weak city party.

Most of the States in the union have concealed or even open carry laws. So maybe you should ware blaze orange as soon as you enter the United States. Or maybe not as that would indicate you as a target. It’s hard to argue against the fact that the single most effective measure to combat violent crime has been the advent of concealed carry laws. Again I suggest you read “More Guns Less Crime” by John R Lott.

The long gun registry has never and will never do anything about the number or type of guns found in the hands of criminals. By your logic then there should be even less handguns on the street since they have been registered since 1934 yet the number continues to increase. The problem is and always has been criminals not the very people that actually obey the law and are more likely to comply with federal regulations. As long as out justice systems sees fit to give short sentences

You do realize that BC has officially banned the sale of body armor and NS is just about ready to ban them also that law is on its 3rd reading. Oh and they are going to create a permit and registry system for body armor I guess bad idea and government money do go hand in hand. Yet criminals will continue to wear body armor especially since we don’t have concurrent sentences in Canada and they onlt have to serve time for there worst offense. Although I wonder if the government will get sued when a drug dealer ends up in wheel chair from a gunshot that would have been stopped by body armor. Just a matter of time before every province sees fit to ban an item that can only be used for defense. God forbid someone want to defend or protect themselves.