My Apology to the Progressive Blogosphere 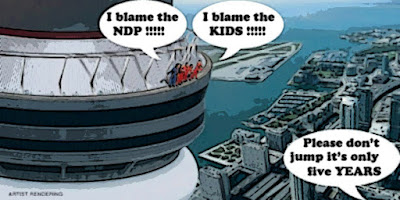 OK. To try to make up for being rude to the Liberals in my last post, and unfairly cruelly slagging, among others, Our Lady of The Impolitical, and in general causing a scandal in the progressive blogosphere.

And after having a quiet chat with the Liberal in the house. Who is bigger than me...and a martial arts expert.

I have decided, of my own free will, to try to cheer up the red Liberals (not the blue ones) and other progressives who are slowly, very slowly, coming to terms with the horrifying implications of a Harper majority.

By suggesting this could be therapeutic.

You pretend to jump. But can't.

“It’s scary,” one restaurant worker shuddered. “You wouldn’t catch me up there.”

“It’ll be pretty windy out there,” another offered. “I hope they’re taking that into account.”

Unless it's really windy, and the cable breaks eh?

But then what is death compared to five years of Big Daddy saying "God Bless Me" and "God Bless My Majestic Majority. Now bend over or ELSE..."

While the head of the Canadian Salvation Army echoes his heavenly call.

"On behalf of all those men and women, I just want to say thank you, God bless you. I'm so thankful for the support, I'm proud to be your chief of defence, God bless," he said.

And Jason Kenney and his fat shirts try to arrest people for being secularists.

Of Harper’s announcement, Kenney said: “You are speaking to their values ... I’ll be honest with you about the extent to which the mentality of today’s Liberal party is characterized by the kind of flippant secularism of the Annex.”

“If you go inside most places of worship around the GTA today,” Kenney said, “the large majority are new Canadians who have a higher degree of appreciation of religious freedom than your average university professor at the University of Toronto.”

But cheer up. Think of it this way. Compared to that death is only RELATIVE.

Anything would be better than this agony of mind...this creeping pain that gnaws and fumbles...and caresses one and never hurts quite enough.

Now does that sound familiar? I didn't think so. This one hurts a LOT.

But this sounds true.

Life begins on the other side of despair.

Which reminds me... I also want to apologize to my Liberal friends, for using the wrong doggy video. And suggesting they were begging for cheese.

That was unforgivable. All I can say is I was drinking heavily yesterday.

And what I REALLY wanted to say is when you drop the stick you are using to beat the NDP and their young MPs.

It'll be easier to go through the door...

And when you do, I'll be waiting for you on the other side.

Down with the TYRANT...

Can we order some lapel buttons that say "Flippant Annex Secularist?"

As a matter of fact, that's a post right there

Unless gawd had a typo and it's actually The Rupture.

Simon, you didn't need to apologize to anyone, least of all to me, sheesh. We resolved it earlier. You're a kind soul. Keep on with it.

I will, however, remain as a Liberal blogger. Sorry. That harmony and beautiful place some want to see in the near future doesn't seem to be in the cards. We're different parties, that's not something to easily walk away from. Some of us just went through very intense campaigns that we worked hard on. It's not just an online thing.

Meaning that legitimate criticisms of other parties will continue. Hopefully always in a civil and respectful way.

hi OB...Oh I don't know. I think now might be the time to keep a lower profile. Being a lefty blogger is dangerous enough. And the thought of Jason Kenney standing there in a dress and jack boots shouting at me in Latin is the stuff of nightmares. ;)
Seriously though..can you believe that guy?
I think we're going to have to explain to these Cons, the difference between a real majority and 39 percent support. And of course the difference between a democracy and a theocracy...

Well slap my white atheist ass with a religious pancake. You see Simon, you’re not the only one who can blog while drinking!

hi deBeauxOs...please don't raise my hopes. I've been disappointed enough recently.
However I shall be looking out of my window hoping to see them first Rapture and then Rupture because that would make up for everything... ;)

hi Impolitical...actually I do apologize to you. I was very upset at the way some Liberals have been mocking the young NDP MPs, but you haven't been making a big deal out of it, so I should have chosen another example. Or better still I should have stayed out of the partisan fray, because it's not like me at all. And we all need more time to heal.
If the weather stays sunny and warm I should be good to go in about five days...or five YEARS... :)

hi James...no actually I can't drink and blog. One bottle of beer makes me giddy, and after two goodness knows what I might write.
I was just hungover from drinking Sangria at the BBQ the day before, and pissed about the whole partisan slanging going on. I think everybody needs to relax, and give it a little time.
You know ...enjoy our freedom while we have it... ;)

Like Impolitical, I worked on the campaign. Unfortunately we were on opposing sides. She is correct to say it will be hard for many to get along.

For the Liberals its the idea that something they have devoted a life to supporting has suddenly hit a new low and so many are predicting its demise.

For me it is euphoria in the sense that my party has finally become the official opposition.

Then there is the issue of a majority for Harper. That kinda puts a damper on it for me and is fuel for Liberals to say the NDP did it.

Of course thats not the full truth.
But Liberals use pleading for NDP supporters at the last minute and getting them, this time it didn't work.

It also saw Liberals lose seats that they have held for 20 plus years. They lost progressive Liberals to progressive New Democrats.

All of this is hard to take when you have lost so much. So don't be surprised to see the Liberal Bloggers attack Layton and the NDP at the drop of a hat.

They have been brutal during the campaign and since. You would actually think the NDP were a greater threat to a progressive Canada than Harper and his right wing theocracy.

It may calm down but not for awhile. It will take all the skills Mr. Tribe has to keep progressive bloggers together.

So Harper gets somewhat of a free ride for two years from the Liberals.

Instead of the Liberals trying to gain NDP voters, they need to appeal to the voters who went Conservative - those voters who couldn't possibly vote for the NDP but would leave the HarperCons in an instant if they had an option.

We heard Harper beg for the Liberal vote to prevent NDP wins and it worked. The Liberal party needs to look at that strategy.

Go after the Red Conservatives instead of us Orangies:)

Jason Kenney is a fucking imbecile, and may I add homophobe, misogynist, bigot, and religiously insane buffoon? Leave it to a shithead like him to attack university professors.. and that this fuckhead is Minister of Immigration is even more appalling. I remember being absolutely floored that fat idiot got elected in the first place; he must come from the stupidest riding in Canada.