Pope Benny and the Male Prostitute 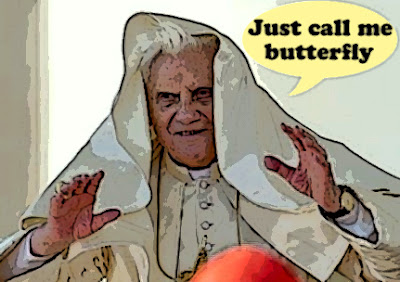 When I heard that Pope Benny was going to allow condoms to prevent AIDS, I was practically paralyzed with shock. Could Benny, like some mummified grub in a musty cocoon, finally be coming alive? Morphing into a butterfly. Or in his case a human.

And then I read the bit about the male prostitute.

In the case of a male prostitute, says Benedict, using a condom to reduce the risk of HIV infection "can be a first step in the direction of moralisation, a first assumption of responsibility, on the way toward recovering an awareness that not everything is allowed and that one cannot do whatever one wants".

And these troubling questions came to mind.

Why is he trying to stigmatize male hookers?  Did  they kill all those straight women in Africa? Or did they die because he told their husbands condoms were sinful?

Is it shite? Is it syphilis? Is he senile? Or is it just subliminal?

And don't you love this?

"The problem was not Benedict, it was others in the Vatican who argued that if you said using condoms was OK in certain situations, it would send out the message that they were approved. This was a PR problem."

Oh boy. What is it about religion and sex that makes hypocrisy so disgusting?

A pastor who said Facebook was a “portal to infidelity” and told married church leaders to delete their accounts or resign once testified that he had a three-way sexual relationship with his wife and a male church assistant.

Miller said the dalliances — which occurred in the Millers’ home — sometimes took place during Thursday Bible study meetings and Sundays after church. But the minister said the encounters “came to a crashing halt” when several women in the church accused the assistant of having sex with them.

But seriously, I'd love to see Pope Benny burst out of his cocoon, spread his wings, and become more human.

Because it's never too late to become a good person.

But the truth is this rubber dubber changes NOTHING.

Benny is still Benny. Chastity has driven him crazy.

And he's no butterfly...

Maybe he just found out his regular prostitute is HIV positive? :-o

The problem with religiosity is it forgets the part where the point isn't to stop sinning (we can't) but to be satisfied in God. Everything is "allowed". *shakes head*

I may be a Christian person, but I still don't see eye to eye with Catholicism and all it's heartless religion and rituals.

he just can't help himself that pope! what an ass!

hi prin...As I think I've said before when I talk about people like Benny, I really should write "Christian". Or alleged Christian. I may be an atheist because I don't believe in heaven. But since I try to be kind and gentle to others, I consider myself more Christian than he is.
With so much suffering in the world who needs any more? :)

hi thwap...no he can't. And I see that just as I predicted, the Vatican is rushing to downplay his remarks.
I was serious when I wrote that I was willing to give Benny a break, but now I see that he is just using those remarks to put down gay people, so he can just you know what...