The Great War on Christmas:The Movie 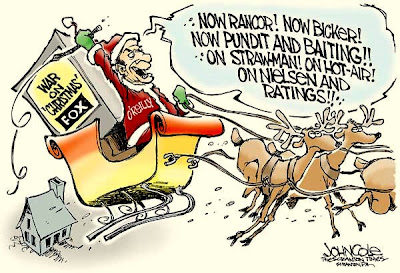 How do you know when it's early November? Answer: when the wingnuts and the Foxtards in the United States start wailing about the War on Christmas,

And this year go a step further, by releasing this Christian movie...

"This is a feel-good movie, with a lot of conflict and the theme of the Grinch finally coming home," said Anchorage-based executive producer David Cuddy. "The final scene is like 'It's a Wonderful Life,' where his character melts and becomes a good guy."

The Grinch and It's A Wonderful Life? Or get down on your knees you atheist scum. Take the Muslim crescent off the Christ Tree. Or we'll burn your house down. SCARY

But wait. It gets worse.

How about a children's book about how Obama, Nancy Pelosi, and Joseph Stalin stole Christmas ? 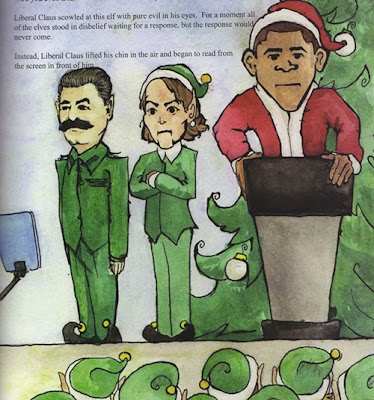 Written by a loser  teabagger.

"The Christmastution is being ignored!" she yells to her assembled mob. "If we want to save Christmas, we must stop taking free candy and fire the liberal elves!"

Elf Peloosi tries to sway the children from voting her out of office with free candy canes but they all wave copies of the Christmastution at her and dump the candy into the Camas' lake.

With the Dance of the Sugar Dumb fairies?

No. That would be too ugly. And too flattering.

How about something prettier, and gayer, and more festive?

It's not only the US, our local (Ottawa) WingNut Lowell Green started the war on Christmas talk earlier this week .... ah for the good old days when that sort of tripe didn't happen until after Remembrance Day 'eh?

The guy 'melts' at the end of "It's a Wonderful Life"?

Certainly not Mr. Potter, the true villain of the piece, who stole thousands of dollars from the Savings and Loan.

And really, the Christians complaining about the 'communism' of what's being done to Christmas are quoting "It's a Wonderful Life?" A hallmark of a socialist community-lending organization raised in direct defiance of the local bank? One that supported poor people? That film pretty much declared if the world was run by strict corporatists like Potter, the place would be homeless beggars and exploitive entertainment for rich people. And that it was only socialist do-gooders like our weary hero that kept things from degenerating into laissez-faire capitalism? And that he was on the side of the angels?

Or did I watch another film?

hi stageleft...I've never seen or heard Lowell Green, but from what everybody tells me that's a very good thing. :)
And yes, you think they would have the decency to wait until December. But as the cartoon suggests it's probably ratings gold for Fox News.
Which fortunately I haven't ever watched either...

hi Niles... No I think you were watching the Frank Capra classic. And
the fact they dared compare this piece of shit to that movie is absolutely outrageous. I threw in the video because my first reaction was to laugh. But then when I played it again I thought it was rather sinister. My guess is that it will have a very short run, unless Vic Toews decides to buy a few thousand copies and force prisoners to watch it. It would be cruel and unusual punishment, but then we know those Cons are capable of ANYTHING... ;)