You Can Keep Your Royal Wedding

As somebody who believes that the monarchy served a useful role...in the 17th Century...this wasn't exactly my most favourite day.

Although this did help.

"Her parents can't be overly happy. She has been largely unemployed since she left school and is now marrying someone who has been on welfare most of his life. With the new government's promise to cut housing benefit and force those who repeatedly turn down work into manual labour I do worry for them."

Now don't get me wrong eh? I wish the couple all the happiness in the world. Any girl who moons the boys.

Kate's friend Jessica Hay told News of the World in 2004 that Kate would 'moon' the boys' boarding houses from her own dorm window at Marlborough.

Is my kind of babe commoner. And I found this strangely moving.

Her best memory was an "amazing white-rabbit marshmallow cake that Mummy made when I was seven," and her worst was "being very upset that the pink fluffy shoes I won in 'pass the parcel' didn't fit."

In a Marie Antoinette sort of way.

But just don't ask me to celebrate the royal  part.

Not in Britain, where gay people can't even have a humble wedding, the government has just slashed welfare, childcare, and disability payments. And the Cons are trying to pull a Thatcher.

Suddenly, it feels like 1981 again in London. It seems as if Britain repeatedly rescues itself from fiscal and political discord with a regal trip to the altar: Prince Charles and Lady Diana Spencer back then, interrupting a terrible period of unrest and pain under Margaret Thatcher’s austerity government; and, as Charles’s office announced Tuesday, his oldest son Prince William and his girlfriend Kate Middleton now.

And certainly not in Canada, where the slavish slobbering over the royal wedding practically made me vomit.

William has only visited Canada twice, but Heydel-Mankoo said the prince's place in the Canadian consciousness was secured 12 years ago when he was seen donning Roots' Olympic gear while on a ski vacation with his father and brother, Prince Harry.

Because when the CBC National News leads with the English aristocrat story instead of the Canadian one on Afghanistan, you know we've got a problem.

Look my position is clear. If Canada wants to be a real country, and if we absolutely MUST have a monarchy.

Can we please put the tin crown on the head of a Canadian... 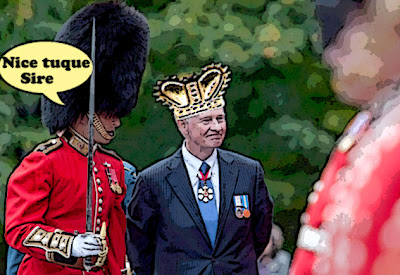 Because although some Canadians seem to regret it, Canada isn't an English colony anymore.

And it's about time eh?

So will I be watching the English royal wedding?

And hoping it's as entertaining as this one was...

Down with the monarchy !!!!

Dang right, Simon. This idea of noble birth went outta style a coupla centuries ago. I was disgusted like you to see a beaming Mansbridge leading off with the royal nuptial story.

Hold fast me hearty. Those bloated balloons at windsor are the only things keeping blighty from sinking into the sea.

I was hoping it'd be me. Then I'd be "Princess Princess, the Princess of Wales" or whatever the title would be.

hi JimBobby...well that makes two of us. :)
I couldn't believe how the Mansbridge show went gaga about a meaningless royal wedding.
You would think the CBC would know better. But of course they're not alone...

hi sedum 13...I know I'm a republican rebel, but a nation that depends on those bloated balloons to keep it aloft, isn't much of a nation anymore. But then neither is Canada...

hi prin...of course if it was you I'd change my mind. But if I was you I'd hold out for Prince Harry. And surely you meant the Prin Prin of Canada...;)

I think I'd become PM and change the title so I'd be Princess Princess, the Prime Princess of Canada. :D