The Census Fiasco: Now You Know EVERYTHING 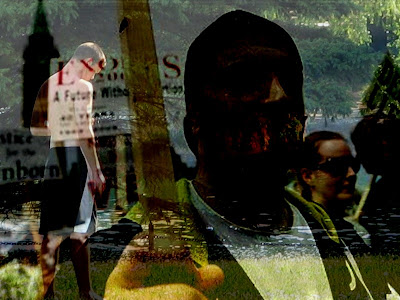 Golly. I just LOVE it when the geniuses in the MSM tell you what I already told you.

He considered going further by making the whole census voluntary, people familiar with what transpired have revealed.

The decision to gut the census came from Stephen Harper not Tony Clement.

And the dumb idea had nothing to do with most of the wild theories bobbing around in the blogosphere. And everything to do with the Con libertarians, and the boob Maxime Bernier.

At a cabinet meeting at least 18 months ago, then-foreign affairs minister Maxime Bernier – who has assumed a lead role in defending the government’s long-form decision – proposed major cuts to Statscan based on ideological libertarianism. The Prime Minister was reported to be supportive (while then-clerk of the Privy Council Kevin Lynch was not).

Oh BTW...did you know that Maxie once worked for this powerful right-wing/libertarian business group?

The Fraser Institute of Quebec. And so did she.

So now you know where she's coming from eh? What a small world.

And of course you know all about the hidden exposed agenda.

Stephen Harper seeks to diminish or destroy the Liberal Party to replace them with the Conservatives as Canada’s default choice for government. His greatest challenge is to dismantle the modern welfare state. If it can’t be measured, future governments can’t pander. I imagine that Stephen Harper’s view, Canada should be a country of individual initiative, not one of collective dependence “justified” through the collection of data.

The one I've been warning about for FOUR years; i.e. when Stephen Harper said he was going to change Canada beyond recognition he meant he was going to rip its guts out with his TEETH.

So now I guess you want to know what Tony Clement is going to say tomorrow when he appears before a parliamentary committee.

Oh well. That one's easy. He's going to say it was all the fault of his staff. And that he's an almost hero.

Oompa Loompa. How do I do it? I amaze myself.

Answer: Because I'm a genius eh?

Disguised as an IDIOT.

And I know a monster devil  when I see one... 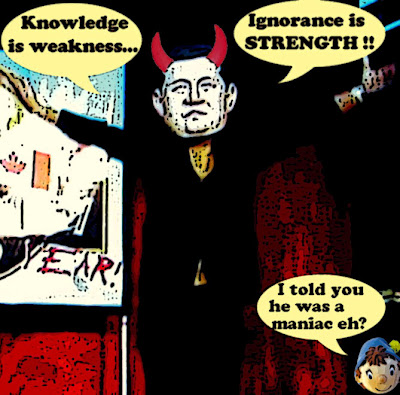 Well other than the genius part at the end a great post.

hi anonymous... thanks and that's OK. Have six more and even you will call me Einstein... ;)

I think he's going to spew his usual talking points, trying to spin an insult to all who oppose this decision. Loyalty comes for a price - like $50 millions worth just recently, no?

Dear Sir.... er, Einstein .....er, Simon... well actually all of the preceding ....
BEAUTIFUL Piece! Did my heart good! All the links just linkin' up!
I have to say, not being of your intellectual calibre, that one of my favourite phrases of the blog was "the boob Maxime Bernier." Well put & right on the money! I suspect the Main Man Max has more to do with most things than any of us suspect.
And a last BRAVO to you!
With deepest kow-towing,
;-)

My husband went to high school with 'Tony the Tory' (seriously - that's what his yearbook photo said), and from the stories I've heard I really don't think that he's stupid enough to actually believe the shite that's been coming out of his mouth the past couple of weeks. Bernier, maybe, but not Tony.

Ideologically, Tony's always been more of an old school PC than a ReformaTory, which leads to only one possible motivation: blind ambition. The man wants to be PM - has ever since high school - and he will do anything and say anything if it will help him get there.

You are a genius Simon. I'm gay and I think you're clever and funny.

hi anonymous two...I can't imagine how Clement is going to get out of this one. He apparently opposed the decision, but now has to carry the can for Harper and his leadership rival Bernier. His staff is revolting and every sensible person in the country is against him. So I definitely will be watching...if I can get out of bed in time.
Did I mention that although I'm a genius...I'm LAZY? Oh well nobody is perfect... ;)

hi Can Nurse...well FINALLY some respect ;)Heh heh heh as you can tell I'm enjoying this census issue a lot.
What a little gift from heaven to reveal Harper and his Cons as the crazy ideologues they are. As for Bernier...most people assume he's just a dummy but actually he's a real ideologue. And believe it or not he really does fancy himself as the next Prime Minister of Canada. OMG just thinking of that makes my little brain...I mean my humungous cerebellum... EXPLODE !!! :)

hi Jennifer...no I don't think Tony is THAT dumb either. And I just think he's caught between a rock a monster and as you point out his ambition.
Incidentally, I don't know if you saw it, but Don Newman had an excellent column on the limits of that ambition.

Most people have a bottom line. A hill they are prepared to die on.

Munir Sheikh had such a hill. So far, Tony Clement seems to be living on the Prairies.

Hopefully, if sanity prevails, Harper won't be the only Con looking for a new job...

hi anonymous three...thanks for that sweet comment. I really appreciate it. :) Sadly I'm not really a genius, just one of your brothers doing his teeny weeny part to try to make a better world. One that doesn't include Harper and his hideous Cons. But since a lot of people think gay people are too stoopid to write about politics, if I don't blow my own vuvuzela who will?

P.S. My keeper says if I eat up all my brussel sprouts one day I WILL be a genius. So now you know eh? Nothing is EASY... ;)

Harper and his crew are more dangerous than idiots since they are driven by ambition. It truly is frightening.

Anyway, a friend is involved with this site that includes a link to a petition as well as other activist tips:

OK genius, what brand of beer do you prefer to quaff during our short, but glorious Canadian summers?!

hi Beijing...I'm glad you liked the post. I'm trying my best to see the humour of the situation, but it horrifies me. Not even in my most paranoid fantasies could I ever have imagined that these Cons would trump reason with ideology to such a degree...and hope to get away with it. But now that they've done it I'm glad because if this doesn't awaken Canadians to the danger we are in nothing will...

hi Omar...well I might not vote for the man, and I personally prefer lemonade or sangria, but his choice of a good pur lain beer makes me think that all hope is not lost... :)

It's amazing to me how Mike Harris' name keeps coming up lately. The number of people under Harper have deep ties with ol' Ontario Mike.

However, the thing about the census, (and this is purely speculation and theory on my part), is that, whilst browsing through some parliament bills, I read Bill C-12, which is an act to " readjust the number of members of the House of Commons and the representation of the provinces in that House."

One has to wonder if this isn't a similar ploy taken by the neo-cons in Texas during the Bush administration where they rearranged all the districts in favour of more votes for themselves. I just sense direct ties to eliminating the Census and think it may be a grab by Harpers minions to create a higher number of seats for themselves.

Feel free to enlightnen me if I'm way off base.
Great blog, by the way. : )