Stephen Harper, the Census, and the Libertarians 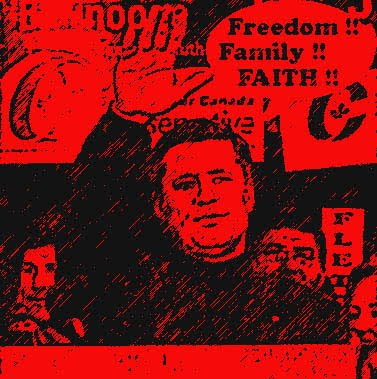 I'm pretty sure that most Canadians don't remember what happened on the night of March 12, 2009, when Stephen Harper addressed the Con hordes at a Manning Centre conference.

Because when he screamed "Freedom, Family, Faith !!!" I knew things would never be the same again. I called it the night the mask fell off. The night the Amerikan religious right came to Canada.

But something else happened that night, that I believe explains Stephen Harper's bizarre decision to gut the census better than anything else I've read so far.

Because he didn't just embrace the Christianists, he launched a blistering attack on his Libertarian supporters.

It was an odd message. In reality, libertarians are a mixed bag of people who roughly favour free markets, less government and greater individual freedom than we have now. Exactly how many libertarians exist in Canada, how many call themselves conservatives, or vote Conservative, isn’t known. But there can be no doubt that some core of conservative support comes from people who hold some libertarian views and favour smaller government.

An attack that left them reeling.

The treatment to classical liberals and libertarians--of which I consider myself--was nothing short of stunning. The condescension was literally dripping from his mouth. Was this his response to the disillusionment that libertarians across the country have had to his government and it’s policies of late? If it was, it did not build any bridges. Rather, it burnt them right down.

Since then these Libertarians have been further disillusioned by the Harper government's failure to abolish the Human Rights Commissions they hate so much. And the way the Cons have been spending money like hogs.

So I think this desperate census move, like the move to kill the gun registry, is probably just an attempt to lure them back into the fold. Harper may have thought he could do without them. But he can read the polls.

This is cold comfort for both Mr. Ignatieff and Mr. Harper. While the Liberals continue to trail, the Conservatives are still far off the majority mark.

And I know that everything Stephen Harper does is aimed at securing a majority, everything is political, and with those kind of numbers every vote counts.

So after reading all kinds of theories about why our tin pot dictator decided to gut the census. I'm surprised nobody has mentioned the Libertarian angle, because who else would this move appeal to?

Surprised too because the two best known Libertarian politicians in North America are Ron Paul and his son Rand...the hero of the Tea Party movement. And they are ALWAYS attacking the census.

Which allows us to frame the census story for maximum political advantage by boiling it down to this:

To appeal to a small part of his squalid base, Stephen Harper was prepared to shroud our country in the darkness of ignorance, ignore the common good, draw on his inner demons,and turn Canada into a Tea Bagger Nation.

Which is why I like what Charlie Angus says here.

The Conservatives, he said, are importing the anti-census language of the "fringe" of the U.S. Republican Party and the Tea Party movement to attack an "extremely credible" organization.

"This is a manufactured crisis to play to a partisan base," Angus said.

Because it fits into a narrative that could KILL the Cons. Where we are the Canadians and they are the Teabaggers.

Yup. When you want to defeat your enemy, first you must KNOW him.

Or if you prefer....when you chase a bunny.

Make sure it's the right one...

Why doesn't anyone realise that the general and detailed questionnaires have the names of the persons who have completed the forms stripped off and not used further in the StatsCan research?

The names and addresses are required for compliance measures (completing the form) and NOT the harvesting of private data.

So, Tony Clement is talking out of some other orifice other than his mouth.

It's a little like university admissions and scholarship awards.
The names and addresses of candidates are stripped off so as to not influence the arbiters.

The constant of suppressing the names and addresses of persons at addresses is vital to assuring the anonymity of the person. Fortunately, the information gathered from a census tract provides a very accurate profile of an area for planning purposes.

The Canadian census is a model of its kind and it's a tragedy Harper and Co. are doing their damndest to destroy it.
-----

There was a great quote from Ignatieff yesterday. He said that the only thing more expensive than education is ignorance.

I don't normally like to use a Nazi analogy, but Harper's "Freedom, family, and faith" comment reminds me of the Nazi "Kinder, Küche, Kirche" (Children, kitchen, church) motto for women. Kinder and Küche can switch places: freedom = kitchen; family = children; faith = church.

As a {green} libertarian, I am not comfortable with the idea that government would come to work with inaccurate census data, as would be the case if Harper truly does dispense with the mandatory long form.

Libertarians are not pleased with how the police behaved at the G20, and they know Harper has responsibility there.

Libertarians see police as an armed force within society, and though uncomfortable with that, we understand the need to have them. We do not, however, agree that the state should have a monopoly on the use of force, and thus tend to disapprove of weapons being registered (I don't, though the past few weeks have shaken my resolve a bit). So Harper gets support there... mind you, his stance on the G20 police abuses is a contradiction as he supports widespread natural rights abuses without review and accountability.

So we have this contradictory juxtaposition of 'census bad' - 'police civil rights abuses good', which for libertarians sticks out like a sore thumb, and shows that his only principle is short term gain to maintain power over the various cliques within his base.

Who would he be if he had a majority?

hi Torontonian...you can't ask rational questions about an irrational act.It's just not possible. This is just a mad political move, mainly designed I believe to win them back some libertarian votes, and create another wedge issue. It's the triumph of ideology over intelligence and it's SCARY.
On the other hand, it reveals the Cons for the monsters they really are. So I'm bouncing up and down like Tigger shouting "I told you so. I'm not a dummy I'm a genius. Yippee !!!" :)

hi Skinny Dipper...you don't have to use a Nazi analogy. In my post the day after that speech I showed how the slogan is lifted right out of the handbooks of some of the most extremist Christianist organizations in the United States.
The Libertarians got a shock that night, but it should have been a warning for EVERYONE...

hi Mark...I know a couple of green libertarians, stubborn as mules, but extremely nice people :)
In fact, to be honest, I almost can't disagree with everything you say. Except for the gun registry, which I believe is a useful tool for police officers, but I am willing to seek a compromise for people who live in rural areas.
But I totally agree with this:

...his only principle is short term gain to maintain power over the various cliques within his base.

Who would he be if he had a majority?

And your last question haunts me...

It's worth revisiting your entry of March 15, 2009 when you talk about the events where the phrase "Freedom, Family and Faith" were spoken by Harper.

In the piece - "Harper behind the Mask" - you include a photo of Harper's shadow taken by Tom Hanson.

A comment from "Niles" said the shadow reminded him of the villain Blue Meanie in the Beatles film "Yellow Submarine."

That is such a brilliant comparison!!!

To quote -
"We Meanies only take no for an answer. Is that understood Max?"
"No your Blueness."
"That's better."

That could be an exchange between Mr. Harper and any of his ministers.

Thanks Simon for your powerful outrage!!!
Keep it up!

I'm libertarian and THRILLED by this! Census people banging on my door and writing me threatening letters for not responding - serves them right, now they are out of work. I have mixed feelings about Harper, but today I'm liking him a little more.

And if you think I care about anything the census is used for - you are wrong.

as for the other posters - a Nazi slur that required you to make the stretch from 'kitchen' to 'freedom'... haha, really? and oO Harpers scary shadow... really?

I can't believe we still have the gun registry... I thought that was taken care of. People there are wild animals we have to defend ourselves against!

and to show that I'm not just a Harper cheerleader - the G20 $1B thing is a horrible mistake, Canada is too small to be throwing away that kind of money for something that doesn't have any economic benefit to us, let America host it or host it quietly (and cheaply!) in the middle of nowhere or at least somewhere where the majority approve of it and the protesters would have to travel to another city to protest.