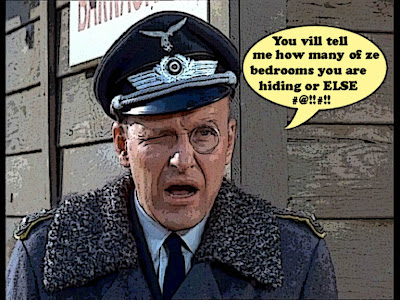 Achtung !! Achtung !! It's the Con Gotterdammerung !!

With the latest orders from the PMO...or Klink's Place.

When arrested approached by a census Nazi taker you vill only give zem your name, rank and serial number.

A senior Harper cabinet minister is invoking the Geneva Convention when defending his government's controversial decision to scrap a mandatory long-form census.

“All we’re saying is, people shouldn’t be threatened with jail because they don’t want to tell some unknown bureaucrat how many bedrooms they’ve got in their house,” Mr. Day told Calgary radio station QR-77 on Friday.

“And you know, even prisoners of war only have to give their name, rank and serial number.”

OK. I know Doris Day is an idiot.

And so is Tony Oh My Darling Dumb Clementine. 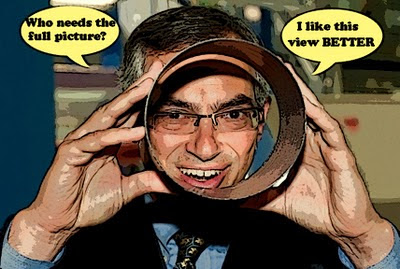 And that the Great Lord of Darkness is certifiably insane... 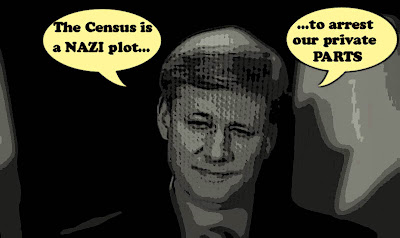 But this is the LIMIT.

How dare these torture Cons use the Geneva Convention to justify ANYTHING?

Mein Gott. I realize it's terribly hot. I also realize that in Harper's Canada paranoia is a higher state of consciousness.

But two things are for sure eh?

These wretched Cons are morally and mentally unfit to govern.

For the sake of our poor country.

Now can we ARREST them?
Posted by Simon at 7:36 PM

Hey Simon: Funny post, got me laughing hard. Guess Harper and his merry band who "cannot walk and chew gum at the same time" (hey the Economist said it, I didn't) didn't stay awake long enough till the part where the Geneva Conven. says that you cannot torture or facilitate torture of your prisoners, eh?

hi CK...of course they do, their arguments are ridiculous and bordering on the INSANE. But of course Stephen Harper is NEVER wrong.
Oh goody. This can only get better and better... :)

hi anonymous...thanks a lot...there is nothing I enjoy more than making people laugh. When you're living in Con Canada I think it's essential for our survival. :)
But I was serious when I said how DARE these human rights abusers invoke the Geneva Convention?
The Census fiasco is bad enough, but claiming they care about human rights is simply beyond the pale...