Tony Clement and the Bedrooms of the Nation 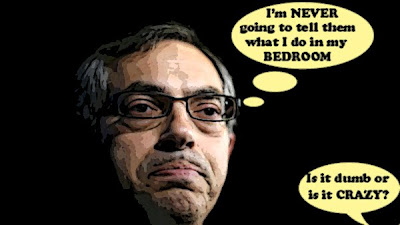 Oh no. This isn't going to be easy eh? It hurts. But I have to admit that when I called Tony Clement  Oh My Darling Dumb Clementine, I wasn't harsh enough.

Because any man who starts his day by declaring that Statistics Canada will henceforth be known as the Con Ministry of Convenient Facts and Useful Disinformation.

And denies that there is a...um...a problem.

Q: Is there tension between you and Mr. Sheikh?

A: I had a good chat with him last Friday and he has been in constant contact with my office and with [the Privy Council Office]. I believe we are working together to do what Statscan is supposed to do, which is provide data in a way that is pursuant to the legislation and pursuant to government policy to the best of its ability.

Q: So is the relationship strained?

And then this happens .

Is clearly suffering from more than terminal idiocy. He's losing his grip on reality. And this doesn't help.

The government made this decision because we do not believe Canadians should be forced, under threat of fines, jail, or both, to disclose extensive private and personal information. We believe it is not appropriate to compel citizens to divulge how many bedrooms they have in their houses or what time they leave for work in the morning.

I mean REALLY. What is the dumb Clementine babbling about?

Why is he so obsessed about  the bedrooms of the nation? What does he have against urban planning? And does he really think the aliens want to know what time we leave for work so they can kidnap us...and probe us with their pointy things ?

And what about those weird tweets?

Are they really on the internet? Or are they in his head?

Is his head buried up his ass? Or in the sand? Like an ostrich.

Clement’s rigid proselytizing in favour of the determined right not to know would be rib-cracking laughable if it weren’t so bone-headed ideological.

Or is he just hearing his master's voice? The sinister hum of Stephen Harper commanding him to gut the census, because he wants to feed his rabid base. 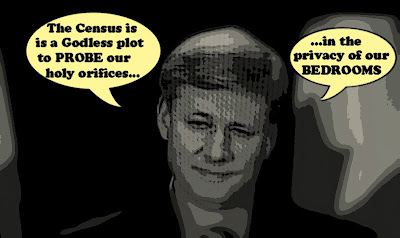 Because Harper WAS the one who gave the order, and now he's going to pay for it.

If he backs down he looks like an idiot or a weakling. Which can be fatal for a tin pot dictator.

Golly. I don't know anything about statistics eh? But if I was betting that Harper is going to come out of this one badly.

Simon,
Harper will ride it out making gains with common voters. Only sexual deviants are making stink about census.

hi anonymous...OMG not you again. How come they let you out so soon? You know I bet if I put one of your longer messages into this writing analyzer:

I bet it would come out: SOME PERVERT.

The good news? With people like you against us how can we lose? ;)

P.S. Sorry about your other comment, but as you know you only get one every six months. So I'll only publish your next one in December...

"Only sexual deviants are making stink about census."

They're called TORIES, and they're making that stink so that accurate information will become harder to come by, and people will just accept their bullshit line. Like that abortion causes cancer, or that just being gay will give you AIDS. Since no one will have stats to prove otherwise, it would be a slam dunk for them to promote such deviant policies as mandatory abstinence and slut-shaming, concentration camps for gays, etc.

Or so they hope. Too bad for them that SANE people are fighting back.