The G20 Summit and the Black Sunday War Game 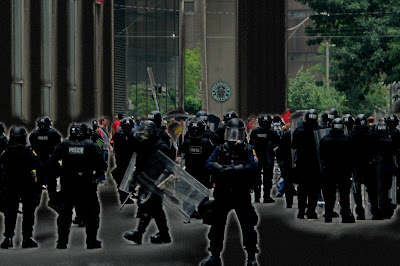 Well I'm glad to see that Premier Five Metres McGuinty has finally acknowledged that the people of Toronto were traumatized by the G20 Gorilla Show.

"I think it was very intrusive on life in Toronto. It did result in some fairly serious property damage."

"I also think that there was some tremendous psychological scarring because of what people saw on TV. Burning police cars is not something that anyone will forget for some time."

But he's wrong if he thinks it's just about property damage and three burning police cars. Because 16 police cars and far more stores were damaged during the Stanley Cup riot in Montreal.

And what traumatized me and so many others was going downtown and finding an army of police officers  playing what seemed to me like some strange kind of Black Sunday war game.

Where ordinary, peaceful, Canadians were The Enemy. 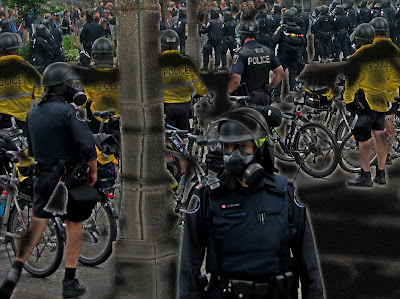 Squads of police were running around in the humid heat like toy soldiers being moved by some invisible hand.

Rushed here, there, and back again for no apparent reason.

Take this bizarre incident. A group of peaceful protesters and onlookers is being held back easily by a few police officers on bicycles. 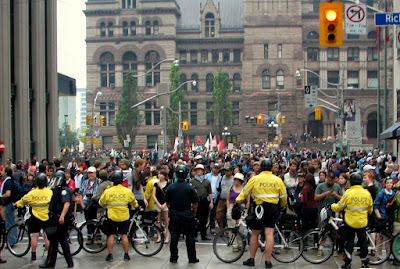 Then suddenly allowed to move two blocks closer to the summit site, only to be blocked by these riot cops. 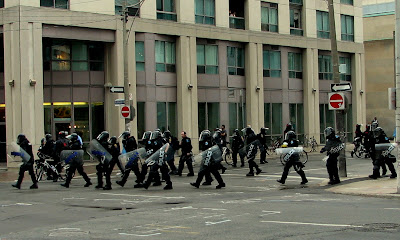 And then pinned up against the giant plate glass window of a Bank of Montreal. 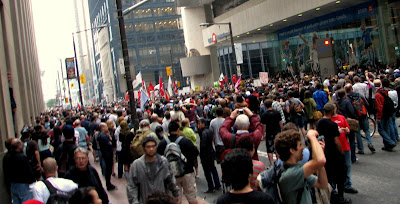 It was like they were inviting trouble. Looking for an excuse to start cracking heads and arresting people.

So I wasn't surprised when about two hours later this happened.

And police began arresting hundreds of innocent people and locking them in cages like animals.

I want to know who in the ISU war room 200 kilometres north of the city gave the order for the crackdown to begin. 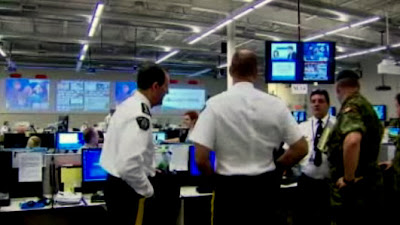 How could they know what was really happening at ground level in the city, when they were watching it on television monitors?

Who gave police the crazy idea that Toronto wasn't Canada?

And did the fateful order to arrest all those people really come from them...or the  Harper Cons in Ottawa?

The only way I'm going to get those questions answered is if we get a public inquiry. Because even an independent police investigation isn't enough.

Collectively, they turned our city into an armed camp with empty streets, secretly invoked special police powers, allowed a few hooligans to run amok burning police cruisers and smashing store windows, and then arrested and incarcerated more than a thousand people, the vast majority of them guilty of no crime. Businesses in the downtown area suffered a big drop in sales. Instead of showcasing the city, the event produced damaging images, broadcast around the world. What is needed is a full public inquiry, called by either the province or Ottawa.

And until I get those answers this little story by Margaret Atwood will also continue to haunt me.

Why – knowing of the dangers of holding the G20 in a fenced-off, emptied-out downtown Toronto – did Prime Minister Stephen Harper not respond to Toronto’s pleas and change the venue?

Was the treatment of those arrested some sort of dry run – a testing of the waters to see how far those in authority can move toward Tinpot Dictatorship North, without a vote-losing backlash?

Because others have more powerful stories, others really suffered. Others really lived the nightmare.

But all I can say is that when I saw that Black Sunday war game I felt like I was staring at the face of fascism. Or  living in  the dark foulness of a Harper majority. And it was HORRIBLE.

Yup. I definitely need those answers. We need a public inquiry. 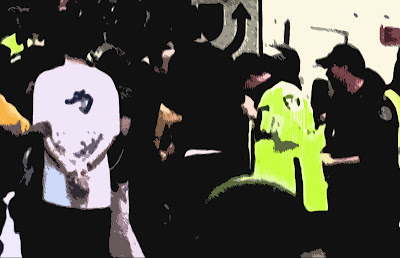 I attended a meeting with CLAC tonight (Convergences a la lutte anti-capitalistes). I couldn't stay for the whole thing; gotta work tomorrow and I'm not 18 no more. And we're livin' record breakin' heatwave in Montreal.

I learned that the several hundred who are out on bail will be, get ready for real stupidity now, tried SEPARATELY. Yep, I had to get one of them alone to make sure that I heard correctly. We're talkin' at least a few hundred who will be tried separately. the TO crown isn't busy enough? Guess we really don't need Sweater vest Steve's tough on crime bills after all if the TO crown is that bored.

Needless to say, CLAC's legal committee is trying to get the Quebec cases tried collectively.

Finding a lawyer is hard enough. CLAC is raising funds to cover bail and legal fees which is in need.

The media (CJAD) here made them out to be the leaders of the Black Block , practically. I found them to be bright people who are genuinely concerned for the future as we are and don't like the direction CAnada or the industrialized world is going in, and they want their voices heard. You get the feeling that the typical Canadian apathy is all that is 'rewarded' (depending how you look at it, if you catch my meaning). Instead of leaving their fellow Quebec detainees behind, they want to attempt to help them too. It's refreshing to see so many young people involved. There were people my age and older as well too, though.

hi ck...I think I've written all I want to say about that Gorilla Show.
Others have more powerful things to say,or suffered more. I just got caught up in the nightmare because I live and work in the summit area. And I refused to stay at home and put my life on hold just because some big chiefs were having a lobster and caviar bullshit fest in my neighbourhood.
I never joined anyone, I never provoked anyone. I just looked at this Planet of the Apes spectacle with my eyes wide open, because I couldn't believe what I was seeing or feeling. And took as many pictures as I dared to take so I could show them to my friends in Montreal, in case they thought I was just being a drama queen. Who me? ;)
I was going through those pictures tonight and it suddenly struck me that what I had witnessed was some kind of war game. Because the way they were moving cops around was frantic, and detached from the peaceful reality I was seeing. I thought OK they're worried that the Black Bloc types would outflank them and reach The Fence. But no I followed one of them and there was NOTHING happening. I had no idea why they had moved and as far as I could safely determine neither did they.
And remember it was really hot and humid. Throw in the overwhelming sense of intimidation, or the little irritations, like the time I smiled in a friendly way at a cute female police officer, and she fixed me with one of the scariest killer ninja looks I've ever seen, and it was seriously scary and deeply disturbing.
I know it seems like we're ALWAYS calling for a public inquiry, but when democracy is assaulted we can't have enough of them as far as I'm concerned.
We need to examine what went wrong so it never happens again.
And since I'm hoping that Stephen Harper will be the star villain of this Gorilla show inquiry, I can hardly wait for it to begin... :)

All the more reason it's up to us bloggers to keep this whole thing alive; to keep up pressures; otherwise, like the detainee documents, this too will disappear.

However, unlike Afghans torturing Taliban who throw acid on girls' faces thousands of kilometres away which, to be honest, really doesn't grab the sympathy or even the attention of most of the Timmy Horton's crowd, no matter how you explain that it's against international law, they'll just respond something like, Geneva huh?

But, innocent protesters like John Pruyn or by standers or Lisa Laflamme's camera man right there in their home city; well, we got something, here.

So I read in the poll that the connie government is up in the polls after this fiasco (EKOS Poll). I get the sense that all my co-workers are happy about the crackdown. Happy to see heads knocked.

My boss told me he saw the 1 billion spent as a "great investment in infrastructure" because they apparently improved a road for the G8.

Talked to a friend out west and was told that the hooligans got what they deserved. He is typically to the left side of the spectrum.

No one is talking about this outside the blogs it seems.

I am deeply saddened. My vote is no longer going to change this as long as people believe what they are told.

McGuinty Translation - Our young people are being 'radicalized' watching all of these videos posted on FB and Blogs. They'll never vote for me, ever!

hi Peter C...Yes I saw that poll and it really shocks me that Harper is now leading in Toronto. But I'm not surprised. If you watched it on television, where they would replay the burning cars over and over again, and you saw riot police rushing everywhere it probably looked like the end of the world. But if you walked around the area you would have seen an eerily quiet city, with a few hundred peaceful protesters and people taking pictures posing no threat at all.
As I mentioned it was hot and humid, the police were wearing heavy riot uniforms, and many of them looked tired. But nothing can justify the way they some of them were treating people who were no threat to the summit. It's really that simple.When you wear a uniform you just don't do that. If that's all we get out of a public inquiry it will be worth it...

hi anonymous...yes that too. :) I just see McGuinty trying to turn the story into a vandalism one, instead of a massive assault on the civil rights of Canadians. My guess is that if we ever find out what really happened, McGuinty will come out as a weakling who bought the police line, and failed the people of Toronto...