Tony Clement, the Census, and the Almost Hero 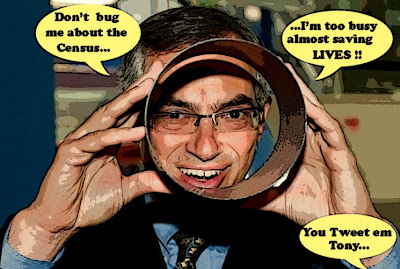 Golly. What a scare. My heart is still beating wildly. For a moment I thought Tony Clement had tried to take the easy way out of the Census Fiasco.

By jumping into a river fully clothed and almost drowning.

But it turns out he was just an almost hero.

Or so he told tweeted us.

The even shorter version:

I jumped into a river. I couldn't swim. I barely made it to the bank. I helped warm her up. I'm knackered. Kids don't do what I did. Tell EVERYBODY. All you need is love. Tweet. Tweet.

OMG. What an idiot. No wonder he wants to kill the census.

And BTW...with all the pork he's pumped and hoovered into his riding.

And where was that G20 steamboat when they needed it?

Oh well...the good news is he survived. And it could have been worse eh?

He could have jumped into the river without any clothes on.

And of course, the even better news is that now he'll have to defend his decision to gut the census before that parliamentary committee on Tuesday.

And I don't think he can. Nobody can. It's that dumb.

And he's clearly no genius.

Oh goody. Remind me to sacrifice a chunk of cheese to the Con Rat God for saving Clementine's life. I wouldn't miss that show for ANYTHING. I want to be there in the front row with a bag of chips and my vuvuzela.

Do you think he'll turn up in a life jacket? Oh I hope so.

Here's to the almost hero. Who would drown us in ignorance.

Play him out  Keyboard Cat  Man...

There is something very hinky about this whole story. He jumps into a dangerous river fully clothed? Um, that's why you throw life rings, and don't try to swim out against strong current to save a flailing nonswimmer.

In other words, I'm having trouble buying Tony as a hero and savior. After all, this is the same man who's trying to wreck StatsCan. Somehow, "we had to kill the census in order to save it" is just not that heroic a sentiment.

It seems odd that the Globe and Mail is about the only media with comments on the report.
Most of the other media have avoided comments form readers/viewers--including the most ardent conservative press like the Toronto Sun.

I know that area very well since the famly cottage has been on Mary Lake for the last . . . .oh, let me see . . . FIFTY-ONE years and that channel of water isn't that life threatening to the wise and cautious.
The water isn't deep; the north branch of the Muskoka River is not boat-navigable at that place. About the only boats in that area where this happened are kayaks.
The rocks and the fast moving water are possible threats to the
inexperienced or the foolhardy and have been so for decades.
-----

Those who have watched the Yes, Minister/ Yes, Prime Minister know the episodes where the minister or PM has a crisis and they try to find a way to sidetrack the nation's eyes. This Clement affair has the hallmarks of that.

Oh, look out the window! Shiny things on the ground!

hi Bina...yes I must admit when I first heard the story I thought it was a production of the Con Ministry of Propaganda and Disinformation. And the body floating down the river was Helena Geurgis. ;)
But even if Clementine had saved the drowning person... floating on her back...instead of almost drowning, that wretched Con could NEVER be my hero... :)

hi Torontonian...I don't usually read the comments in the papers or on YouTube because they are just too ugly. But in this case I might have enjoyed them. ;)

And this is interesting...

The rocks and the fast moving water are possible threats to the
inexperienced or the foolhardy and have been so for decades.

I jumped into the river. I can't swim. I'm floating towards the bank.Oh no !!! Tweet. Tweet. Where did that rock come from? *BOING*
Lord Jesus. Lord Harper. I'm sinking. I'm sinking

Because that would have been even MORE exciting... :)