Pride Day and What it Means to Me 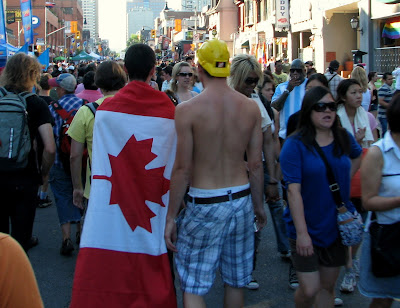 I went down to Pride Toronto this afternoon with a few friends, and although it was 30 degrees in the shade and I practically melted, it was an awesome experience.

Every year it seems the event just gets bigger and bigger. 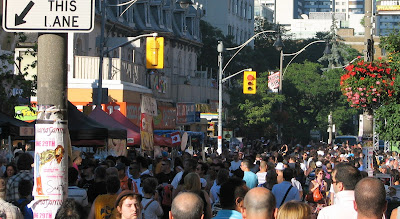 And this year there are more people, more stalls, more of everything. 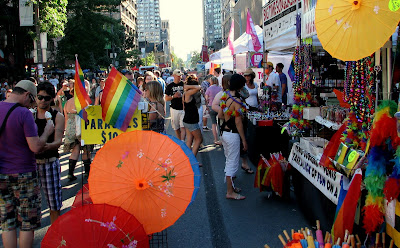 So much for this controversy.

Although this does seem a bit ominous.

Hopefully, push won’t come to shove this Sunday and things won’t turn out as they did in August 1933, when some foolish young punks unfurled a swastika flag at a baseball game involving a Jewish team in Toronto’s Christie Pitt Park. Perhaps you've heard of Toronto's Christie Pitt riot? The fighting went on for three days.

Or just plain hysterical and CRAZY. Because no gay person is going to hurt anyone. There is no hatred in our parade. Pride Day is about celebrating love and diversity.

And EVERYONE is welcome to join in the fun. 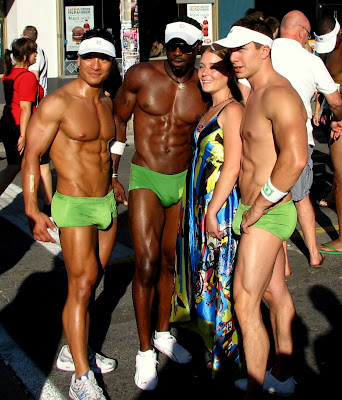 It is and always will be a political event. One that marks the anniversary of the Stonewall Riots when gay people finally said enough is ENOUGH. 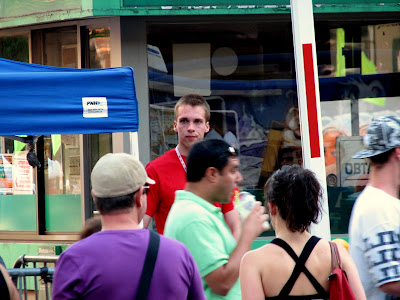 It marks how far we've come. And how far we still have to go.

And this year it's also a humungous gay/straight/whatever wild but gentle street party... in a city that badly needs one.

But for me it is and always will be mostly about the kids... 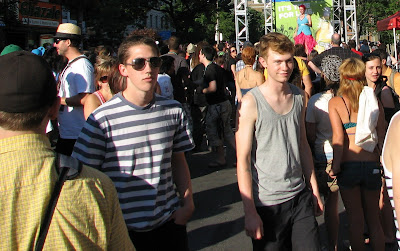 Because I remember my first  Pride Parade in Montreal, when two shy 15-year-olds marched down the street holding hands in public for the first time.

And how it felt like we were walking on air, that we weren't alone anymore, and that we had a big gay family that would embrace us even if others didn't.

And how after that I knew that I would fight bullying and homophobia and all other forms of bigotry FOREVER.

You know the big American gay blogger Joe My God ended a recent post about Stonewall, by quoting an old Jewish joke.

They tried to kill us, we won, let's eat.

And then going on to say this about gay people.

They wish we were invisible. We're not. Let's dance. 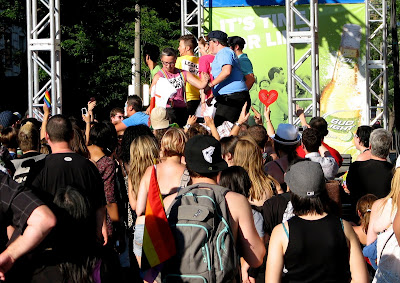 Because whatever they say, or however they try to divide us.

Gay, straight, or whatever, see you at the parade.

Thank you Simon and the same to you! I will be marching with the Pride Coalition for Free Speech.

hi Fillibuster...I'm glad you'll be marching tomorrow. I will be waiting to applaud you... or salute you with my humungous super soaker. The one they call The Howitzer. I hear it's going to feel like 40 degrees so you'll probably appreciate it... :)
Happy Pride Day !!!

Hey Simon,
I like the new blogger template, very pretty. Been using the RSS so don't often come directly to the blog.

Anyhow, got a question about something I heard on CBC Radio one this morning. It was an off comment about naked gays at the parade. Although I'm not prude I find it disappointing that is what gets onto the news and that folks give em a chance to put it there. As someone who was there, are there any facts to that?

Other than that, I'm glad you and your family enjoyed yourselves. We need more of that in all aspects of our lives!

hi Peter...I'm so happy that you like my new look. I was hoping that people would find a bit brighter and easier to read, but nobody said anything so I was getting worried... ;)
As for the nudists ...yes it's true there were about thirty of them this year, and near the front of the parade. Believe it or not I am a bit of a prude when it comes to walking down a crowded street naked. But where I was there were Chinese grannies in the front row in their chairs who just loved it. And one father lifted up his young son so he could see them. So maybe I'm just old fashioned. ;)
But here's the thing, it took about 2 minutes for those guys to go by, in a three-hour parade, so you have to put it into context.
And those who don't are just trying to tarnish the whole parade and that's ridiculous.
In fact this year I was struck by how many people of all ethnic backgrounds, really seemed to get into the sexy parts of the parade. To me it seemed like they found it liberating.
So even for a prude like me that's encouraging... :)

Thanks for the info.

Truthfully I'm of two minds. If it was nudists, then well... D'uh... of course they were naked and I suspect doing nothing lewd at all. I know a couple of groups of nudists and they almost always have a strict code 'bout that sorta stuff.

It is interesting that CBC took the time to mention what sells (nudity) but not talk about the politics of the parade and Israel. Of course, that just gets angry letters and doesn't sell.

As for being prudes, well, I do think North America needs to loosen up some. We don't need sex in the streets but sex isn't evil neither!

I do like the new look, a lot less oppressive and it also works better with my RSS reader.