Michael Ignatieff and the Summer Enemy

It was so hot on the lake today it was hard to tell where the fog ended and the smog began.

Back on Lost Boy Island it was even HOTTER. 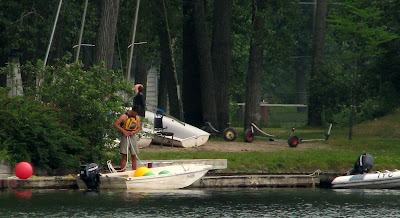 And all I could think of was why didn't I join the dive club? So I could sit on the bottom of the lake and cool down a bit.

All of which to say if Michael Ignatieff had come around the corner sweating like a pig and said " Hi Simon I want to tell you why I should be the next Prime Minister of Canada."I probably would have fainted.

But luckily sadly it was never going to happen.

Now don't get me wrong eh? I want Iggy to do well. I'm a member of the Anyone But Harper Party. And at this point ANYONE will do.

And I don't believe in magic either.

For the last time: the physical world does not conform itself to journalists’ desire for metaphors! Mechanical breakdowns are not “emblematic” of anything, except to reporters who like to press the facts into pre-defined templates of spurious significance (see: narrative), or who think the universe is governed by magic.

Only Cons and other idiots do.

And I also want to say I think Iggy deserves full marks for sharing my view of Great Ugly Leader.

Speaking to an audience of Liberal supporters at a Stampede breakfast on Saturday the official leader of the Opposition let fly, saying Canadians "can smell the whiff of sulphur" coming off the Conservative PM, a putrid scent most often associated with rotten eggs and — in Christian theology — Satan himself. 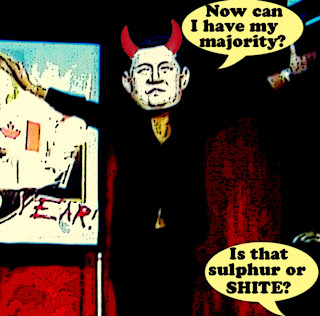 Although even the putrid scent of sulphur and rotten eggs can't accurately describe the foul stench that hideous Con emits every time he opens and closes his Satanic orifices.

And I liked this description of The Lord's Republic of Con Canada even better:

"It was a garbage dump on the outskirts of the ancient city of Jerusalem. It was sort of a pit, if you can imagine a naturally formed landfill. And people would take their garbage there and the smell of rotting garbage, it was a horrible, horrible place.

Still I'm glad Iggy is trying to start a real debate about the kind of country we're becoming. Because we really do need to ask ourselves some hard questions.

How did we come to the point where we are governed by a group of men who are as evolved as their theories of creation? How could they so casually and brutally, for the sake of a $1.3 billion photo op, revoke our civil liberties?

How is it possible that so many of us approve of these police actions?

But it's the heart of summer in The Great White North so NOBODY is listening.

Of course I'm not giving up. I intend to keep on blogging. 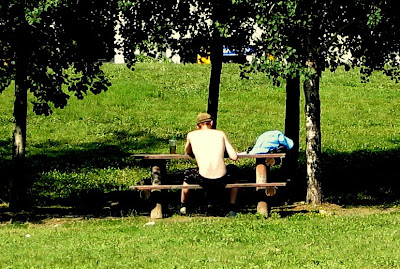 Until the beer runs out.

But here's the only bit of dazzling insight I was able to come up with today eh?

We will beat the tyrant one day, and send him back to the hellish place he came from.

But right now, in The Great White North. Whether you are on a bus, a plane, or a boat.

It's going to be hard to beat SUMMER... 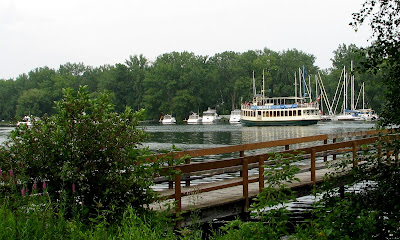 Well Iggy hasn't given up but according to Susan Delacourt the national TV reporters have all left the express.

I did get an awful wonderful idea though. What we need is to re-divide the Right. Outflank Harper and his Cons by splitting some of that 30% support off to a new Reform-style thing. Only need to get the meme going that Harper hasn't done enough to squash the socialists etc. And Quebec gets what it wants while Albertans' loftier concerns are discarded. That sort of thing. Maybe Preston Manning could find his second wind and become Peevey Stevie's worst nightmare.

hi Scott...the Iggy story...too depressing...OMG. But I like you're idea. If we can't unite the left, then let's split the right. I want you to know that I am seriously considering joining the Wild Rosehip Party in Alberta. Now that Myron Thompson has joined that redneck posse how can we lose? :)