The Con Porkers and the Omar Khadr Farce 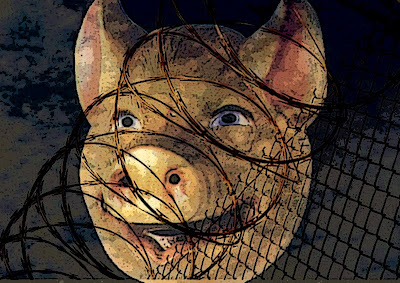 I'm not surprised that the Con porkers have decided to launch yet another appeal delaying tactic in the case of  Omar Khadr.

Because the only thing more piggy than what's happening in that ghastly gulag called Guantanamo, is what's happening right here in Canada. And these AmeriCons would eat their own excrement to satisfy their rabid base, or create another wedge issue.

But speaking of excrement I really can't let this steaming pile of pig poop go unanswered.

The case of terrorist poster boy Omar Khadr -- his only upside being the luck-of-the-draw of being born in Canada-- has reached another crescendo...

Khadr was 15 when he ended up in the American prison camp at Cuba's Guantanamo Bay, and he is now almost 24. Boo-hoo. And la-dee-dah.

Boo-hoo yourself you racist bastard. Omar Khadr is not a luck-of-the-draw Canadian. He was born and lived in this country for years, and should have the same rights as any other Canadian citizen.

He was also a child soldier according to the U.N. Protocols that we were the FIRST to sign. So he never should have been imprisoned and tortured.

We, unlike too many, remember terrorism is bred in the bone of Omar Khadr.

Wrong. Terrorism is not genetic you ignorant asshole. Omar was just a young boy when his crazy terrorist father dragged him off to the badlands of Pakistan and Afghanistan. He was victimized by his own family, then by the Taliban, then by the Pentagon, and now by the Harper government.

And since when do we punish people because we don't like their family? What kind of a jungle society is Canada becoming?

And, oh yes, after allegedly tossing the grenade that landed him in Gitmo for killing a U.S. medic, Sgt. Christopher Speer.

When was the last time anyone cried for Speer?

Wrong again you idiot. Many tears have been shed for Sgt. Speer. But he was a special forces soldier, where unlike other units medics carry guns and kill people, and he knew what might happen to him.

And Omar Khadr couldn't possibly have thrown the fatal grenade because he had been badly wounded in a series of air attacks that happened as much as an hour BEFORE Speer was killed.

He was riddled with shrapnel, blinded in one eye, and was facing away from the action slumped against a bush, when he was shot twice in the back. 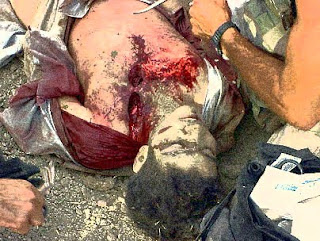 And the grenade was most probably thrown by another Taliban fighter who was still alive in the rubble.

The one the Pentagon tried to cover-up, because this whole case is nothing but a travesty of justice. The Sun editorialist may be too dumb and Con to recognize that. But Omar Khadr does.

Oh boy. As I've said before this is such a depressing story. Some of my gay friends still wonder why I am defending a Muslim extremist, who could be a homophobe.

So I tell them there is no evidence he is an extremist. His guards all say he is a decent young man, a model prisoner, who prefers Disney comic books to the Koran, and dreams of returning to Canada and becoming a graphic artist. Even though he's half blind. 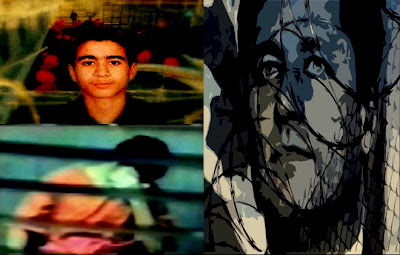 But even if he WAS an extremist I'd still defend him because he WAS a child soldier. The way he has been treated is unforgivable. And demanding justice be done is the only right, decent, and Canadian thing to do.Period.

But still I admit it's discouraging to see how many Canadians, including some so-called progressives, are starting to think like Amerikans.

So it was really nice to receive this comment the other day from the guy who refused to shake Harper's hand.

You are such an inspiration.
The case of Omar Khadr is one so completely overlooked by the majority of Canadians, and just another thing that makes me ashamed to be Canadian.
I've organized an Amnesty International group a few years ago, and have been involved with the organization ever since. The main focus of our group over the past few years has been that of Omar Khadr. Through having multiple campaigns, it has always exposed me to some pretty horrible ignorance, but it's when meeting people like you that I realize there is still hope. You give me hope, You give me strength.

Forget what Jeremy says about me because I'm not THAT great eh? But isn't it really great to see a young Canadian in Newfoundland doing all he can to fight this injustice? In a country that's starting to smell of pig shit.

Because the erosion of civil liberties in this country didn't start with the G20 or the Afghan detainees story. It started with the case of Omar Khadr. When a Canadian child was locked up and tortured, nobody cared, and justice became a FARCE.

So isn't it also great that Jeremy refused to shake Harper's hand? Because after what that hideous Con is doing to Omar and Canada, and what our country is becoming. 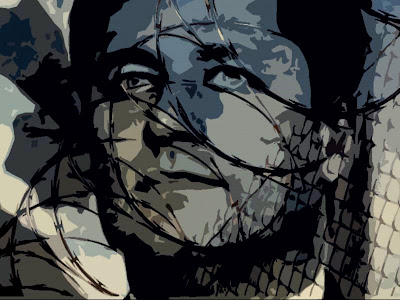 I do not read the Ottawa Sun and am in shock after going to the link to that editorial...are those comments coming from Canadian citizens????

I must live a sheltered life because I do not come across people who say those disgusting, vile things about other human beings.

Thank you, Montreal Simon, for balancing that bile with your always strong and ethical writings!!!!

I read and commented on that OS article.
I said that I viewed the editorial as hate literature and racist and that this needs to be reported.
The comments were even worse.
I had to report some of them."take him out and shoot him between the eyes"
These people probably want to see Maude Barlowe, Naomi Klein and the entire Council of Canadians behind bars too.
Oemissions

You are soo far off the mark:
1 - Omar is a trained terrorist and not a soldier of any kind
2- Under the Geneva Convention a "child soldier is defined as somebody 14 or under - Omar was 15 when he murdered an unarmed Medic
3 - Omar has spent less that 6 years in Canada
5 - the majority of Canadians do not want him or his family in Canada.

To have standing under the Geneva convention, both parties have to sign the agreement. While all NATO countries have signed, neither the taliban nor any other Islamic terrorist group has signed. So they the terrorists including Omar has no standing there.

hi anonymous...oh yeah the comments. The articles are horrible but the comments are even worse. To be honest I can't bear to read them anymore. I too have difficulty believing that Canadians can be that ignorant and vile. And it doesn't really matter what they say because the truth is the truth is the TRUTH.
And thank YOU for your kind comment. It's not easy trying to be a good person, because I am a bit wild, and I do have a bad temper. But I'm trying... I'm TRYING... ;)

hi Oemissions...good for you for writing to them. As I told the previous commenter I didn't read the comments but I can only imagine what bestial foulness that article unleashed. Bush and Cheney may be gone but their teabagger gang oinks on. I'm afraid when we take over the world we're going to have to pen them until they learn to reason and can walk on their hind legs... :)

hi anonymous three...no I'm afraid it is you who are off the mark. Or channeling Ezra Levant.
(1)Omar Khadr is a child soldier according to the Optional Protocol on the Involvement of Children in Armed Conflict. Which also applies to all those under the age of EIGHTEEN:
Article 4 of the Optional Protocol:

“Armed groups that are distinct from the armed forces of a State should not, under any circumstances, recruit or use in hostilities persons under the age of 18."
(2)Khadr did not kill an unarmed medic. In the Special Forces a medic is a fully functioning combat soldier. I'm sorry Chris Speer died, but please get your facts right.
(3)Omar Khadr was a born in Canada and it doesn't matter how many years he spent here, he IS a Canadian citizen who was forced to leave the place he loved by his crazy parents who dragged him into danger.
(4) Whether most Canadians want him here or not is completely irrelevant. We do not administer justice on the basis of whether we like people and their families or not. That's not justice that's the jungle...

hi anonymous 4...look I don't want to repeat everything I've just said. But can I urge you to please read the U.N. Protocol on Child Soldiers, or at least read Chris Selley.