Stephen Harper and the Boondoggle Bonus 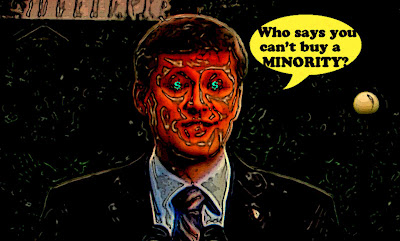 Well at least now we know what gazillions of dollars, a fake lake, a G20 Gorilla Show, a Conada Day celebration, and inhaling the Queen's farts can get you eh?

I must say at first I was worried. I mean if Iggy shrinks anymore they'll have to carry him around in a jam jar...or an oil barrel.  But then I read this:

A final interesting hypothesis is that Stephen Harper may now be assuming a symbolic as well as political role...If indeed Harper is now becoming a proxy for national pride, this may make the challenge for Ignatieff even more formidable.

And I knew it had to be the brutal heat wave. Because I've never heard anything more ridiculous.

And what else could explain this?

Finley said he's hopeful senators will eventually bow to the will of the elected Commons, which has already approved the bill. But if they don't, he said: "Let's dance."

"We're ready to go to an election if we have to. The buses, the planes, the trains, the money, the boardroom — everything's ready to rock and roll."

Cons can dance? The buses are ready? They're ready to take their show on the road? 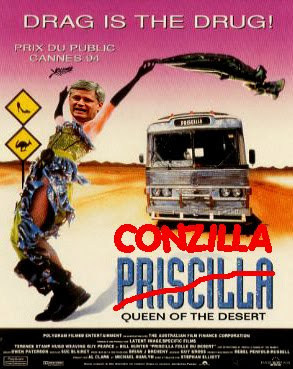 Nah. I just can't see it. And neither can the Cons.

While we do hold a lead over the Liberals, Caucus members should be aware that a 10-point lead is inconsistent with the findings of other pollsters and our own, internal assessments.

When subsequent polls show different findings, this will NOT mean that Michael Ignatieff has suddenly gained momentum.

Because they know it's just a mirage. When Canadians recover from this heat wave, and they realize how much money Harper and his Cons have spent trying to buy a majority minority , they'll be back to where they started.

And even Iggy will look good better.

Memo to Doug Finley: Surrender to summer like the rest of us. You idiot.

The Cons are going NOWHERE.

Stephen Harper's probably rolling on the floor, biting the carpet, and screaming: I spent FIVE BILLION dollars and all I got was a lousy minority ???!!!

And only Jack can DANCE...

The really good news? If a guy who is battling cancer can dance for three hours in the blazing heat, he's in better shape than I am.

As for the rest of you. 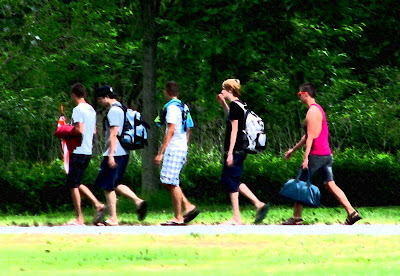 I don't know Simon, this beat up the hippie stuff seems to be playing far to well amongst Canadians lately. A few plants and a burning cop car seem to be all that is needed when all the information you get is from your friendly neighbourhood "fair and balanced" newscast.

Instead of reporting we are getting "Well he thinks, well she thinks different, and the great debate continues" without the depth of, you know, finding out the facts of the matter. If someone thinks A, the actual facts support A, then the person who thinks B is wrong and to portray their incorrect opinion as a way to be fair and balanced, does just the opposite.

I've talked to a lot of people about what is going on in the country, some have different values than I do and that is okay, but most just don't know the score. The basic facts behind what is going on. I've heard over and over about how wonderful an economist Steve is...WTF? Have they even glanced at the budget numbers? Nope, too complex and the news didn't mention a thing.

I consider myself woefully under informed, there is only so much time in the day, but few I've talked too can even string a couple of facts, actual verifiable facts, together. Often the only "facts" they have are the press releases that quietly got cancelled on a late Friday night.

hi Peter...I admit that I sometimes err on the side of optimism. I do it to try and cheer up the good and decent people of this country who are living in these awful Con times. My friends kid me about it all the time. When things are OK I can be grumpy and pessimistic. But when the shit hits the fan I'm Mr Cheerful. :)
But I know what you're saying. I am deeply troubled that the G20 summit has apparently won Harper support in Toronto. And when I'm at work I hear a lot of the same opinions you have. Those kids were out of control, they should have tear gassed them etc etc. Which is depressing. I remain fundamentally optimistic that the many crimes of this regime will eventually catch up to them. But I suspect that time will only come when people realize that the Cons are leading us to financial disaster. Hit them in their consciences and they shrug, hit them in their wallets and they scream. The chickens will eventually come home to roost, and I believe that the auditor general's report on the porky action plan will open a lot of eyes.
But of course to take advantage of that, people like Ignatieff will have to pick up their game. And that one makes even me despair...;)