The Con Klown War on Russia: The Day After 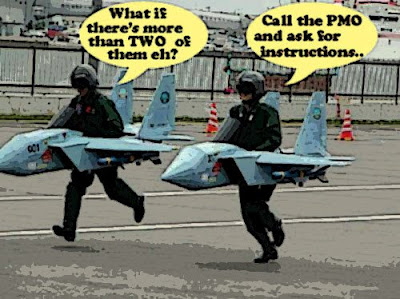 Wow. What a difference a day makes. Yesterday it looked as if we were going to war with Russia.

It was the Big Story in our dumbo media. Yesterday they couldn't stop yapping about it. Today it had fallen off their radar screens. All was quiet on the Eastern front. And at least one journalist was wondering what the fuss was all about. And why the MSM was played like a fiddle.

The military officers I was talking to yesterday were full of kudos for Defence Minister Peter MacKay for a move that one described as “playing the media like a finely-tuned fiddle.”

The officer was referring to the breathless Canadian news media coverage of the flight of two Russian bombers that were “intercepted” by Canadian CF-18s.

Yesterday’s incident prompted some amusement at NDHQ about how gullible some in the news media can be and how easily some journalists swallowed the government’s bait hook, line and sinker.

Gawd. Can you believe it eh? A dumbo like Peter MacKay playing the dumbo media like a finely-tuned FIDDLE? Eeeh AWW Eeeh AWW. Talk about a symphony of IDIOTS.

Oh well...I suppose we should be grateful at least ONE member of the MSM saw through the sham. Although I suppose so did Paul Wells...sort of.

Because when a government pulls a stunt like that it really deserves to get nailed. And a picture isn't enough.

You just GOTTA run the video...

And then make sure that Harper and his gang of irresponsible Con Klowns ride this bomb...this diplomatic doo doo drop....this Strangelove FARCE.

All the way to the next ELECTION.

Is that too much to ask of our useless dumbo media? Oh probably.

How do you say " I surrender" in Russian AND Canadian?

Vodka anyone?
Posted by Simon at 1:35 AM

Dave has been all over this. It really does boggle. As someone who was taught by a Journalism department that was founded by the pros at the old Montreal Star, I am often left bewildered that the current crop with the most pedigree can still be duped with such regularity. How did we lose our way?

One bright light: a colleague of mine - whom I trust to get it right - is among the crop currently climbing the ranks at CTV.

My first reaction was of skepticism. It was pretty obviously manufactured news, and no one seemed to be asking what for me was the obvious question: What was the point of the minister's press conference, and why was he doing it at this particular time (weeks after the fact)?

Isn't there that vacancy high up in NATO that Peter was being considered for?

Could he have been trying to show some mettle?

Or was Harper trying to divert us from his woes in Parliament and his own leadership?

Hi Scott...yes I read Dave's account and of course he's right. This has just been another irresponsible stunt by our hopelessly incompetent BushCon government.
As for why the media was fooled so readily I just can't explain it.
Part of the problem is that so much of our media is controlled by right-wingers so reporters are intimidated into not rocking the boat.
But the other problem I believe is that the media cycle is so quick and so fragmented that reporters don't have enough time to see the Big Picture. They just rush in and react and then look like fools. Except that we don't get to appreciate that because by that time they're on to another story.
Oh boy...talk about the blind leading the blind....

Hi Torontonian...I think you're right about the Cons looking for any excuse to distract people from our economic woes.
And it's pretty clear that this story was timed to coincide with the visit of some NORAD general.
But I didn't know about the high NATO position that Dumbo might get.
And it terrifies me... :)