The Holocaust Denier and the Popen Penzer 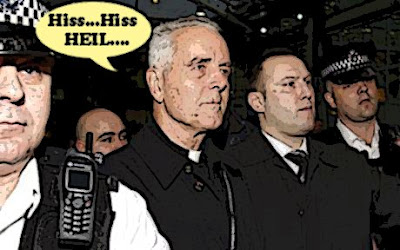 Well I see the Holocaust denying and rabid homophobe Bishop, Richard Williamson, is back in Britain.

After getting the bum's rush in Argentina.

But not before threatening a reporter

Good for them. That was easy. Although sadly there was no mention of his brutish hate for gay people...or his retarded views about women's equality.

And no word either from Pope Benny. Or any explanation why he invited Richardson and his lunatic sect back into the Catholic Church in the first place.

Oh well ...I guess he must be busy trying out his new Popen Penzer...

You know the one he was forced to get after his Popemobile broke down.

Golly. I wonder which country he's planning to invade next?

Where's Braveheart when we need him???? Gosh. You don't think Williamson thinks he's Rommel do you?

What would we do without them?
Posted by Simon at 4:59 PM

I'm surprised that Williamson hasn't come to Canada to replace his fellow homo-hatin spawn of Hitler Alphonse de Volk as the new editor of Catholic Incite(ment).

You know, the hate propaganda publication that has received over a hundred thousands dollars from the Federal Government to spread homophobia and lies.

Our tax dollars were used in a program where Catholic Incite(ment)sent unsolicited free copies of its magazine to everyone in the Catholic School system's employment.

That's exactly what the Nazi's did in the 30's. A free copy of Mein Kampf was sent to every German soldier and every newlywed couple. A very efficient way to propagate hate. I just resent my tax dollars paying for it!

Hi anonymous... OMG. Williamson in Canada that's a horrible thought.
Although at least I might get a chance to tell him what I think of him.
I've never heard of Alphonse or the magazine, but I will be doing some research because that sounds outrageous.
BTW did the unsolicited magazines make good paper planes...or do you have to keep them and use them to start BBQs in the summer ? :)

Those shiny pages of the Catholic Incite(ment) magazine ruin its only useful purpose... that being back-up swipe in the outhouse at the cabin. Damn we miss the old Eaton's catalogue!

You can read some of the internal documents about Catholic Incite here:

Doesn't it give you a warm fuzzy feeling to know that the Harperazis are supporting this kind of hate propaganda with your tax dollars?

And where is Harper's Canadian Human Rights Commission when gay rights are at stake? They bend over for the hateful priest. see:

Little wonder gay men are still getting attacked or beaten to death. And, shhhhh don't tell anyone, but 1,000 gay men are driven to suicide every year in Canada.

How much has changed since the summer of 67? You tell me!