The Recession and the Capitalist System 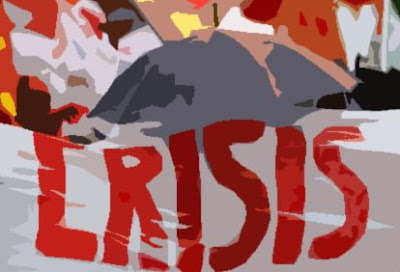 One thing that strikes me about this growing recession is how noisy the protests have been in Europe.

And how quiet it is in North America....particularly in the United States where so many lives are being chewed up.

And how while the Americans are venting their anger on the banks...and the bosses.

Many Europeans are blaming the capitalist system itself.

And asking themselves this question.

No one claims that we're all Marxists now but I do think the old boy deserves some credit for noticing that it's the economy, stupid — and that many of the apparently omniscient titans who ascend the commanding heights of the economy are not so much stupid as downright imbecilic, driven by a mad exploitative greed that threatens us all.

Marx's work is not holy writ....Even so, he exposed for the first time that capitalism is a force of creative destruction, and that its most lethal wounds may be inflicted by its own weapons. “All that is solid melts into air,” he wrote....

Marx was interested in capitalism's crises because he thought they would eventually lead to revolution. That's the other reason why people are interested in Marx today. If he was correct about capitalism's crises, the men with the stubble hope, then maybe his prediction that the whole system would fall apart will also be fulfilled. It won't, because the world Marx was writing about looks nothing like ours.

What's more, the central idea in Marxism — that the interests of the workers and owners were separate and opposed — is no longer true. Anybody who has a pension or life insurance owns part of the means of production because the pension funds and life insurance companies are the biggest owners of shares in companies in the world. The bourgeoisie and the proletariat are thus the same people these days, so the class war which Marx thought would bring the system down is over.

I have no idea who is right. All I know is that a system that causes so much suffering. A system that treats human beings like commodities.

A system that even even in the good times was drowning us in greed. Torching the planet. And leading us all to disaster.

Is a system that needs to CHANGE.

Or the noisy protests of today.

Will become the REVOLUTIONS of tomorrow... 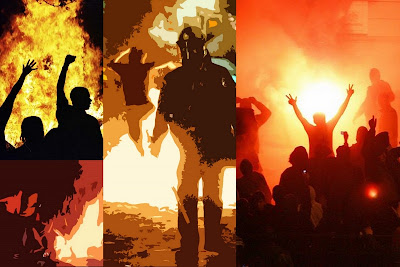 "The bourgeoisie and the proletariat are thus the same people these days, so the class war which Marx thought would bring the system down is over."
(emphasis mine)

I'm positive that is all theoretically correct in the context of 'pension funds and life insurance' and no doubt looks great on paper. But, to which country does that refer? Because I can't think of a single Western nation where the gap between rich and poor has not widened considerably in the past couple of decades.

Maybe the reason why it's a bit "noisier" in Europe is because their situation is far more worse than the one in the US. The EU is about to fall apart, countries such as Hungary, Czech republic, Poland are loosing value of their currencies, countries such as Germany, France, Ireland are on the edge of "bankruptcy". And when everyone thought they could rely on the EU and together solve the problem of the crisis, the EU failed. It does not work as a system and everyone is looking for a change. I wonder how it will end up.

Hi Frank....yes I also thought that was a bit too much. Because as you point out every statistic show the rich are getting richer and the poor are getting poorer.
And of course the pension fund argument only lasts as long as the pensions last.
But to me the biggest argument for radical change is that this economic crisis is not happening in a vacuum. It's happening at a time when the system that is causing so much misery is also torching the planet. And the collision of the two will change this world beyond recognition...

Hi Real Estate...yes you make some good points. Eastern Europe is in trouble, and so is the E.U. particularly since Britain is in the American camp.
But I think we're in a lot more trouble than we think. We're the dinghy attached to the Titanic and the more it sinks the more it will drag us down.
There seems to be a bit of a time delay but we'll get there sooner or later.
And yes we do live in interesting times...