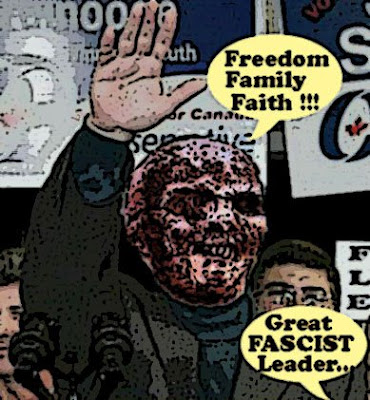 Well I suppose it had to happen someday. Stephen Harper's mask finally fell off. He confused Preston Manning's crummy Con conference with a beer garden...or a Baptist Church. And the monster was finally revealed.

Harper told the group that his version of conservatism is summed up "in three Fs:freedom, family and faith."

He said individual freedom is vital but it must be tempered by family and faith.

Faith in all its forms teaches . . . that there is a right and wrong beyond mere opinion or desire. Most importantly, it teaches us that freedom is not an end in itself, that how freedom is exercised matters as much as freedom itself."

Because by their words you shall know them. And let's be absolutely clear. Not only are the three Fs the slogan of every tinpot fascist dictator from Franco and Salazar to Pinochet and Bush.

It's also the favourite slogan of the Christian Right....including the reactionary, homophobic, anti-choice fanatics from the Family Research Council.

“Family, Faith, & Freedom.” Although these three values seem benign, the framing strategy constructed by the FRC painted a dire picture in which same sex marriage and abortion are threatening America from within, while terrorism is threatening the family from without—a frame that points to the terrorist attacks on 9/11, while leaping over criticism over the war in Iraq, other specific military interventions and the economy.

Which makes me wonder who wrote this speech? Was it Harper, or his new/nouveau Deputy Chief of Staff Darrel Reid...the former President of Focus on the Family?

Or one of the many other thecons in the cloisters of the PMO?

You know I'm not surprised that Harper said what he said. His pretending to be a Liberal, so he can fool Canadians into giving him a majority, has his rabid base foaming at the mouth and threatening to desert him.

So he had to send them a message: I'm still Stephen your Godly servant....I'm still one of YOU. *Hisssss*

What does surprise me is that so few in the MSM seemed to hear the coded message or react to it.

Because after this, any decent Canadians who don't understand what a threat Stephen Harper's SoCons are to our country and its values, should get brain transplants.

Before they wake up in a Canada they don't recognize.

Seems that Ignatieff wants to court the same "faith, family and freedom" crowd for votes.

I can see our political landscape evolving into the horror that is the US with every politician running scared of being painted as a "secularist".

"Faith ... teaches us ... that how freedom is exercised matters as much as freedom itself."

Dangerous, dangerous ideology to be held by someone in the PMO. It licenses him in his own mind to dictate how others may exercise their freedom and also to define what constitutes 'family'. In other words, it makes 'freedom' and 'family' irrelevant as values in and of themselves. (For myself, 'family' would not rank as a value.)

Might as well jettison the other two Fs out the window and stick with what Harper really means: Faith alone, and only of the kind he endorses, matters and from it, all else follows.

How convenient, since "faith" belongs to the realm of myth.

I have been harping about Harper's fundamentalist beliefs since 2007 - pointing out that to Canadian voters, this is his Achilles Heel!

Do they ever look at the statistics on divorce, spousal abuse, child abuse and domestic violence in general?
Does freedom mean being free to devastate a planet through corrupt extraction of resources, to profit a few while using the labour of people earning less than a living wage.?
Does faith mean not to question or challenge existing beliefs.?
There are several other F words I could add to his list of F words.

Well, Harper's gestapo threatened me with criminal prosecution because the didn't like my
homo-made bumpersticker that said:

Of course, I immediately took the
threatening letter from his ta_SS_er cops to the media and exposed them for being the extortionists that they are.

So, now I have the proof - he is
FFF'n HARPER

Don't you think this would be a much better country if more people made a billboard out of the backside of their cars.

It's legal and it's cheap. A black felt marker and a piece of white adhesive shelf liner paper works great.
GO FOR IT ! BE SEEN AND BE HEARD.

Hi Beijing....yes I saw that. Just what the Liberal Party NEEDS. As if they don't have enough SoCons. In the U.S. the theocons are reeling but here in Canada we appear to be encouraging them...

Hi Chrystal Ocean...yes that is a sinister comment isn't it?
As for family it's just a codeword which means the nuclear family. Not any other kind. And especially not my gay family.
I spit in the tyrant's face. The man is a maniac....

Hi leftdog...thanks ...and thanks for writing so many excellent posts on the subject. With you and Beijing and the others holding the secular fort out West I can sleep better at night... :)

Hi Oemissions...although I am an atheist I have a lot of sympathy for decent Christians who treat other people kindly. But of course I have none whatsoever for the hate crazed fanatics of the religious right. Still...I am happy Harper revealed himself because now nobody can argue that there isn't a hidden agenda.
We can't get rid of this bum soon enough....

Hi anonymous...good for you for standing up against these bigots. I would put a bumper on my car...if I had one.
But maybe a smaller one on my bicycle would do just as well... :)