The Con Conspiracy to Destroy Canada 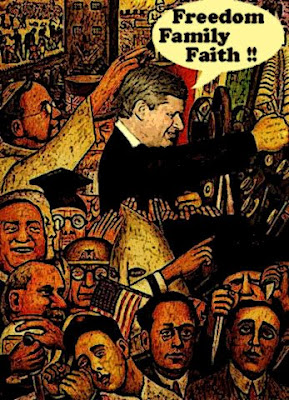 Their crazed leader screams Freedom Family Faith. And gets away with it.

They are plotting to take over student unions.

Their Science Minister is a chiropractor who doesn't believe in evolution.

No matter what that ridiculous Con quack says about high heels and cement....

Their new appointment to the Refugee Board is a religious homophobe.

They have just dealt pay equity and women's rights another foul blow.

And now they are trying to destroy the CBC.

The CBC's board of directors, faced with a possible $200-million shortfall, approved on Tuesday a budget for the coming year that includes deep cuts.Media reports circulating this week indicated the broadcaster was looking at 600 to 1,200 job cuts, although this has not been confirmed.

Because Stephen Harper and his rabid base hate our country, its institutions, and its values so much.

So here's the question: how long can we call this a Conservative government....instead of a Bush Con conspiracy to destroy Canada ?

How long before we recognize the true face of the alien ENEMY ?

And how will we EVER explain this one?

Even though there were twice as many of US than there were of THEM.....sixty-four percent to thirty-five. We let the Cons use the recession to destroy our country. Because we weren't UNITED.

So how DO we explain that one? Because future generations WILL want to know why we let the Cons dismember our country piece by piece. Why we didn't realize it wasn't a political game...it was an ideological WAR.

Oh boy. We can still crush these foul evil Cons who are raping our beautiful country. But the great awakening better come soon. If we can't fight as one we should join together in the streets this summer..... and light huge bonfires of protest from one end of the country to the other.

Or by the time the fascist fog lifts.

Simon, c'est vrai!
As long as the Liberals,NDP,Greens and CAP refuse to cooperate, those 35% will continue to rule.
There is not enough TIME to wait for a new voting system.
If CBC has got to go to ads to fetch in money, then we have definitely lost and will have nothing left to sing about.
Or, should we all move to Quebec and separate? Let the Cons run the rest of the country?

I've been re-reading "V for Vendetta", and there's a panel where V, broadcasting himself to the English populace, notes that the people he's speaking to are to blame for continually electing horrible leaders. The problem isn't entirely the Conservatives. It's people who keep voting for them, and people who freak out when anything novel (COALITION! EGAD!) is proposed.

This is beyond ridiculous.

Less than 40% voted for this idiotic and traitorous government. Harper is in a state of perpetual woodiness since Ignatieff rolled over on the budget. Since those first nervous days, Harper has been revealing one con after another and rubbing salt in every wound he's made.

He's tearing the CBC apart with gleeful abandon and on the heels of such an attack, today they announced that they will be helping CanFREAKINGWest Global and other private media with our tax dollars. And yet we can't let CBC access their guaranteed annual budget early to help them through the slump?

For a good dose of Catholic anti-Sematism read:

"The Frankfurt School: the conspiracy to corrupt -Timothy Matthew opens Catholic eyes about a virtually unknown group of Jewish German Marxists whose deliberate attempt to corrupt Western culture has met with alarming success."

(I didn't see where these alleged villans recommended boinking choir boys or sodimizing altar boys. The unholy see came up with that strategy all by themselves.)

I'll bet you are thrilled to know that Heir Harper is using your tax bucks to subsidize this fascist propaganda under Heritage Canada's Publications Assistance Program and Magazine Development Fund.

I guess that's why there's no money to support OUR CBC.

Welcome to Nazi Canada. I think, it matters not, which party wins, the results will stay the same. The CBC is valued by Canadians for being truthful and calling a spade a spade, so of course CBC must be crushed, as that will not do this new world order. Try and find a government agency that isn't corrupt. The judicial system, RCMP, revenue Canada. The only agency I could find is the Canadian Old age and CCP, they are so far not corrupt, that I could find.